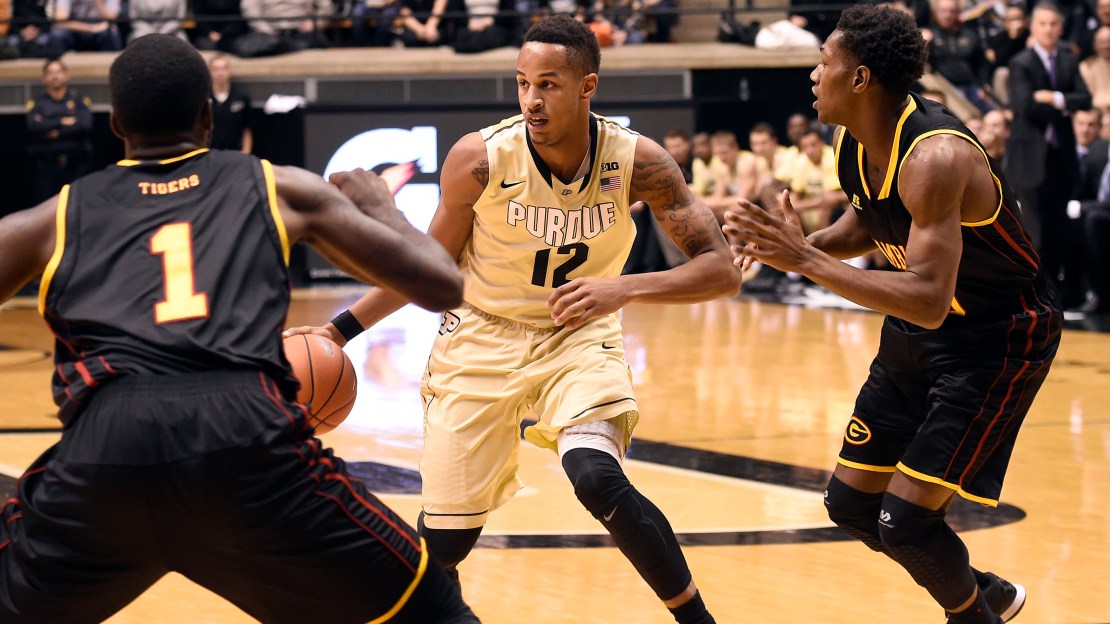 See his latest trio of takes below.

1. Impressive young Boiler. A few days before Purdue?s opening game, I sat courtside with Purdue athletic director Morgan Burke and watched Matt Painter put his Boilers through a thorough and intense workout. Burke and I discussed his swimming days at Purdue, his days as an attorney and this year?s Purdue team. ?Keep your eyes on Vince Edwards, the freshman out of Ohio,? Burke said. ?He is going to be special.? Edwards practiced well, but what impressed me most were his actions after practice. The rest of the guys were heading to the showers and Edwards approached me as I was chatting with my old foe, current Purdue assistant coach Brandon Brantley. With a smile on his face, Edwards looked me in the eye, gave me a firm handshake, and complimented me on my playing career at Iowa. Then, instead of wasting his time with small talk, he told coach Brantley, ?Let?s get some extra work in.? Brantley and Edwards proceeded to a basket to train as I headed out into the cold, West Lafayette winter for my drive home. A few days later, Edwards exploded onto the scene, averaging 19.5 points 8 rebounds while shooting close to 70 percent on his way to claiming the season's first Big Ten Freshman of the Week.

2. Secret to Wisconsin's success. Former coach Al McGuire is credited for saying, ?the best thing about freshmen is that they become sophomores.? If any opponent is going to upset Wisconsin for the Big Ten title, its freshmen are going to have to play big. But due to Frank Kaminsky and their veteran roster, upsetting the Badgers is a BIG IF. Like McGuire and Indiana legend Bob Knight, Wisconsin coach Bo Ryan molds veteran teams who refuse to turn the ball over, defend, and take high-percentage shots. That?s why this year?s Wisconsin team reminds me so much of the old Hoosier teams. Traevon Jackson, Josh Gasser and company are so trained to protect the basketball that they automatically take themselves out of the game when they make a careless turnover. I attended practice a few weeks ago, and, in one drill, three offensive players had to go the length of the court and score against four pressing defenders. Coach Ryan said it teaches his players to keep correct spacing and 45% angles from the ball handler. Most importantly, the drill forces his players to process information quickly when the ball is thrown their direction. The work is paying off. The Badgers are currently second in the nation with a minuscule 7.5 turnovers. If things go as planned, Wisconsin could play Florida, North Carolina and Duke in the next week. Turnovers will be key against the pressure of those athletic teams.

3. Maryland's loud message. Mark Turgeon had just finished his final media obligations at Big Ten media day in Chicago, but he had already started planning the next day's practice. I overheard him walking out of the hotel lobby with his best player Dez Wells in serious conversation about what the Terps needed to do better at practice when they returned home. The player and coach were ready to let their play do the talking. On Tuesday night, the Terps sent a loud message that they are for real by beating No. 13 Iowa State in the CBE Hall of Fame title game. In a statement game for the Big Ten and Turgeon, Maryland controlled the Cyclones most of the evening in what has become known as" Hilton Coliseum South." ISU won the Big 12 championship on the same court last season, and it is a huge home court advantage for the Cyclones. How did they pull it off? Melo Trimble is as good as advertised and has shown great poise for a freshman point guard. After erupting for 31 points against Arizona State the night before, he let his teammates make plays. Trimble protected the ball, too, as the Terps had zero turnovers through the first 10 minutes. Fellow freshman Jared Nickens (15 points) might be a star in the making, while yet another freshman, Michal Cekovsky, was the unsung hero playing great defense against All-American candidate Georges Niang. Maryland also proved that they will be able to rebound with most teams in the Big Ten, puling down 39 boards. On a night when Wells was missing shots, and Jake Layman was in foul trouble, no one panicked and all of the hard work and unselfishness paid off.  Look for Maryland in the top 25 when the rankings come out.