Week 13 Big Ten Previews: All 14 teams are in action this Saturday 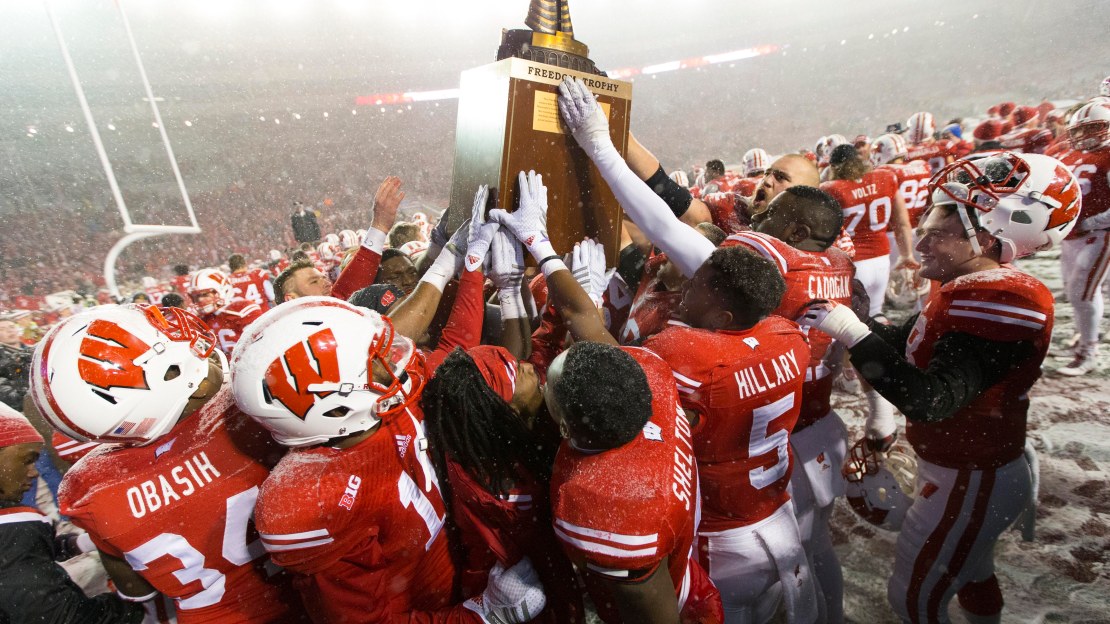 The penultimate Saturday brings us seven Big Ten games for the first time in 2014.

Yep, every team is in action this week, and there are a couple pivotal games to look forward to.

The Big Ten West, in particular, must be watched, as leader Wisconsin travels to Iowa and Minnesota plays at Nebraska in what figures to be two division-defining games.

As for playoff implications, Big Ten East leader Ohio State hosts winless Indiana in a game that it will need to win convincingly to make a big statement.

Here?s my breakdown of the Best of Week 13.

1. Wisconsin (8-2, 5-1) at Iowa (7-3, 4-2) – 3:30 p.m. ET, ABC/ESPN2. This has become a big West Division clash. The Badgers are in sole possession of first place in the division; the Hawkeyes are a game behind. The winner of this game will be in good shape in their finale as it makes a push for the Big Ten title game. Both teams are coming off big-time rushing efforts with each rushing for season-high totals. Iowa had 304 yards rushing at Illinois, while Wisconsin had 581 vs. Nebraska, with Melvin Gordon setting a single-game NCAA standard with 408. The Badgers? top-flight defense may give it the edge. There are few series as close as Wisconsin-Iowa, with the Badgers leading 43-42-2. Wisconsin has won the last two games-both in Iowa City, by the way–and four of the last six. In fact, the Badgers are 3-1 in their last four trips to Kinnick Stadium.

2. Minnesota (7-3, 4-2) at Nebraska (8-2, 4-2) – noon ET, ESPN. Each still is alive in the chase to win the wild and wide-open West. But this game lost some pizzazz with each losing last week. The Gophers battled valiantly before falling at home to Ohio State, 31-24. The Cornhuskers got smashed at Wisconsin, losing 59-24. Which can move forward? Neither team is getting great quarterback play, so this may come down to running the ball and playing defense. Minnesota had lost 16 in a row to Nebraska before beating the Cornhuskers last year, 34-23, in the Twin Cities. The Gophers? last win in Lincoln was in 1960.

3. Maryland (6-4, 3-3) at Michigan (5-5, 3-3) – 3:30 p.m. ET, BTN (Watch on BTN2Go). The Wolverines are making a late push for bowl eligibility, needing one more win to reach six victories. If Michigan doesn?t get it vs. the Terps, it may not happen with the finale being at Ohio State. Maryland already has punched its bowl ticket. Now, it?s looking to sweeten its postseason spot. The Terps also are looking for a signature win, though the triumph over Iowa earlier this year was nice. Michigan is 3-0 all-time vs. Maryland, as all three encounters have been since 1985 and have taken place in Ann Arbor. The teams last met in 1990 in Ann Arbor, with the Wolverines taking a 45-17 triumph. Randy Edsall brought his UConn team to Michigan in 2010 and left a 30-10 loser.

4. Rutgers (6-4, 2-4) at Michigan State (8-2, 5-1) – noon ET, BTN (Watch on BTN2Go). The Scarlet Knights got bowl eligible last week with a win vs. visiting Indiana, so anything from here on out is gravy during their inaugural Big Ten voyage. The Spartans rebounded from their disappointing loss to Ohio State by winning at Maryland. This is a prideful program that wants to finish the season on a positive note after seeing its bigger dreams crushed. It?s Senior Day in East Lansing, so emotions may be running high for the Spartans. Rutgers is 3-2 all-time vs. Michigan State. All five meetings have been since 1988. The Scarlet Knights took a 19-14 decision in New Brunswick, N.J., in 2004 in the last meeting.

5. Penn State (6-4, 2-4) at Illinois (4-6, 1-5) – noon ET, ESPN2. When the season dawned, this looked like a battle between two of the Big Ten?s better quarterbacks, with Christian Hackenberg taking on Wes Lunt. But things haven?t gone smoothly for either guy. Hackenberg has struggled in a new offense working behind a thin line. Lunt broke a leg earlier this year before returning. The Nittany Lions are suddenly hot, winners of two in a row after dropping four straight. Most importantly: James Franklin?s program is bowl eligible. The Fighting Illini have lost five of six games. One more loss, and Illinois will be eliminated from bowl eligibility. This will be a battle between the Big Ten?s No. 13 offense (340.8 ypg) and the Big Ten?s No. 14 defense (493.5 ypg). PSU has won the last two meetings by a combined score of 59-24. Illinois came close to winning last year in State College, falling 24-17.

6. Northwestern (4-6, 2-4) at Purdue (3-7, 1-5) – noon ET, ESPNU. The Wildcats may have saved their season with a stunning overtime victory at Notre Dame. Now, NU needs to win out to earn a bowl bid after missing the postseason in 2013. Northwestern?s push continues Saturday at Purdue. Offense has an issue all season for NU, ranking last in the league in scoring (18.0 ppg), but the Wildcats may find some success vs. a Purdue defense that is No. 12 in scoring (31.9 ppg). The Boilermakers were off last week, giving them much-needed time to heal up. Purdue already is eliminated from bowl consideration, but it would like to finish the season on an up note with wins over the Wildcats and at Indiana to close the season in Darrell Hazell?s second year in WL. The Boilermakers won the last time these teams met in 2010. But the Wildcats have won two of the last three times they have visited West Lafayette.

7. Indiana (3-7, 0-6) at Ohio State (9-1, 6-0) – noon ET, BTN (Watch on BTN2Go). A tale of two programs going in opposite directions. The Hoosiers were eliminated from bowl consideration last week and remain the lone Big Ten team without a conference victory, as the offense has been stagnant since QB Nate Sudfeld hurt a shoulder at Iowa last month. IU has lost five in a row. The Buckeyes are one of the hottest teams in the nation-won eight in a row–whose offense is littered with playmakers to go along with a defense that is peaking at the right time. Bottom line: This could get ugly, as OSU leads the Big Ten in scoring (46.0 ppg) and Indiana is 13th in scoring defense (32.3 ppg). The Hoosiers beat the Buckeyes back-to-back in 1987 and 1988. But since then, Ohio State has ripped off 20 victories in a row with a tie thrown in (1990). And victories often have been in dominating fashion.