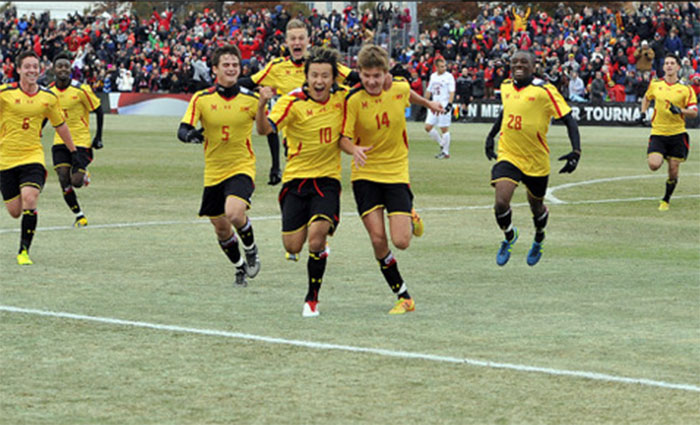 Indiana, which finished the season with a 12-4-5 record, earned the No. 5 seed and a first-round bye in its 39th NCAA Tournament appearance. The eight-time NCAA champion will face the winner of Thursday?s Monmouth versus Xavier match.

After winning the Big Ten Championship and Big Ten Tournament titles, Maryland earned the No. 4 seed in its 32nd NCAA Tournament appearance. The three-time NCAA champion will entertain the winner of Thursday?s Wake Forest versus UMBC match.

Michigan State earned a first-round bye in the NCAA Tournament after finishing the regular season with an 11-4-5 record. The Spartans will host the winner of Thursday?s Oakland versus Kentucky match in their 17th NCAA Tournament appearance.

Northwestern earned its eighth berth into the NCAA Tournament after concluding the season with a 9-3-6 mark. The Wildcats will welcome SIU Edwardsville on Thursday.

Ohio State will compete in its ninth NCAA Tournament after finishing the season with a 9-7-4 record. The Buckeyes will host Akron on Thursday.

Penn State earned its 32nd berth into the NCAA Tournament with a 12-5-1 mark. The Nittany Lions are set to host Hartwick on Thursday.

The first round of the NCAA Tournament will be played on Thursday, while second-round games are scheduled for Sunday. The third round is slated for Nov. 30, while the quarterfinals will take place from Dec. 5-Dec. 6. The semifinals and championship match will be played at WakeMed Soccer Park in Cary, North Carolina, on Dec. 12 and Dec. 14, respectively, with the matches being aired live on ESPNU and WatchESPN.