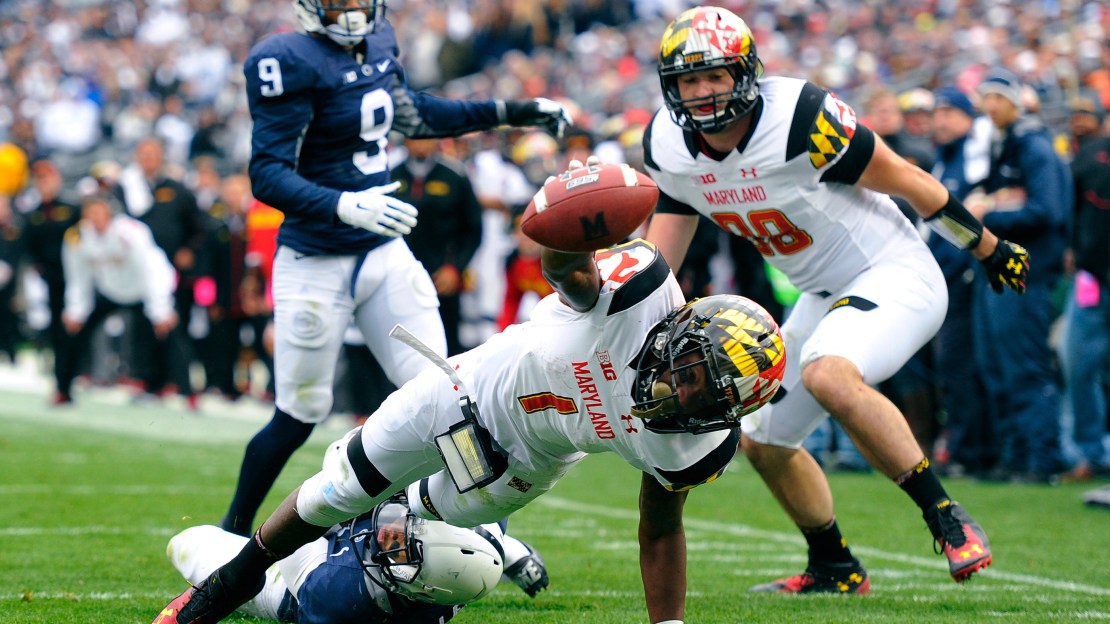 Tough break for Maryland with a report saying star WR Stefon Diggs is out for the regular season with a kidney injury. His 2013 season ended early, too, due to injury (broken leg).

His loss would be a huge blow to a Maryland offense that has struggled gaining passing yards. Diggs is Maryland's leading receiver, with 52 catches, 654 yards and five touchdowns. He was also the Terrapins' kick returner on 20 of the team's 23 returns. Still, this is a pretty deep collection of wideouts.

Ohio State also has been stung by the injury bug, as Dontre Wilson has a broken foot.

What will happen at H-back? Ari Wasserman of Cleveland.com says the Buckeyes will utilize redshirt freshman Jalin Marshall, who has really come on in recent weeks. But he won't be the only one Urban Meyer experiments with. Other names Meyer has brought up as potential fill-ins are wide receivers Noah Brown and Corey Smith, tight end Nick Vannett and Evan Spencer. It?s nice to be Ohio State and to have options.

Marc Morehouse of the Cedar Rapids Gazette says the second quarter of last week?s 51-14 loss in the Twin Cities may was the worst ever under Kirk Ferentz since 2002. And, he?s correct, as Minnesota outscored the Hawkeyes, 28-0.

Front-runner position won?t be the only thing up for grabs when Nebraska plays at Wisconsin on Saturday. The teams also will battle for the Freedom Trophy.

The base of the trophy contains an identical inscription on two sides that reads:

?The Freedom Trophy pays tribute to the brave men and women who have fought in our nation?s wars. The University of Wisconsin?s Camp Randall Stadium, built on what was once a Civil War training ground, and the University of Nebraska?s Memorial Stadium, dedicated in honor of our nation?s veterans, stand as proud monuments to those who have sacrificed so much in the name of freedom.?

Matt Daniels of the Champaign News-Gazette notes Illinois is coming off a much-needed bye.

This most recent off week allowed players like quarterback Wes Lunt and left tackle Simon Cvijanovic to recover from injuries. But it also afforded the Illini a chance to stew more about a disheartening 55-14 defeat at Ohio State on Nov. 1.

?I?d rather play tomorrow,? linebacker Mason Monheim said after the loss to the Buckeyes, ?but it?s going to be good for us. Some guys got hurt. We need to utilize (the off) week so we can come out firing on all cylinders the next three weeks.?

This team still has bowl hopes with Iowa coming to town.

On the subject of Penn State, when will the slump of QB Christian Hackenberg end?

Garrett Ross of the York Dispatch says that thus far, the running game has been the point of contention for Penn State. But after Saturday's game, perhaps the tables are turning, and the criticism along with them. Hackenberg is becoming a target. After tossing two picks against Indiana, he has already thrown 12 interceptions through nine games, which surpasses his total of 10 in 12 games last year. He has seven touchdowns, but three of which came against an inept Akron defense. I still believe in you, ?Hack.?

Steve Politi of NJ.com wonders who has more riding on the Rutgers-Indiana game? Interesting.

I?d say it?s Indiana, since it must win out to go to a bowl. Rutgers has five wins and needs one more to gain eligibility.

What does Michigan have to play for? Well, there?s still bowl eligibility, which along with pride and a glorious chance to ruin Ohio State?s season are the only things left as motivating factors for the Wolverines. Another year will pass without a Big Ten title, the last of which was won in Ann Arbor in 2004.

I?ll leave you with some hoops on this Tuesday with a look at what?s Michigan State?s Tom Izzo?s biggest concern: the two-guard spot.

"The biggest problem is our two guard, I'm not worried about it offensively as much as defensively," Izzo said. "I was just disappointed to be honest with you."

Mike Griffith of Mlive.com says Michigan State has three players vying for the position vacated by first-round NBA draft pick Gary Harris, but only one is completely healthy. Freshman Javon Bess has a broken foot and is expected to be out until late December, while junior transfer Bryn Forbes has a broken bone in his left (non-shooting) hand. Sophomore Alvin Ellis is healthy, but according to Izzo, too "casual" in his style of play on defense.