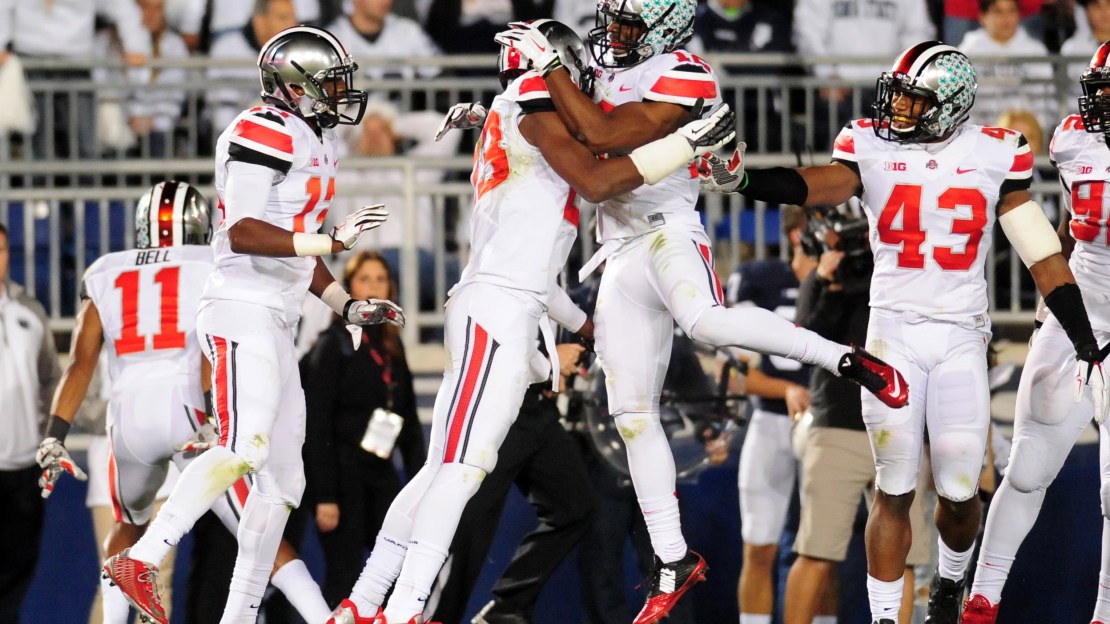 You have questions, and I have answers in this week?s mail bag. This race in the Big Ten West has many of you on your seat. Why not? It?s gonna be a wild race to the finish. Who is the best team? Is it Nebraska? Wisconsin? Maybe Iowa? Fascinating. Let?s get to your questions.

Do you think Ohio State has a championship-caliber team? If not, what do the Buckeyes have to work on? – Tim Gowens

I think Ohio State has the ?stuff? to win the Big Ten. But I don?t think the Buckeyes are ready to compete for the national championship. I think the offensive line lacks consistency, and quarterback J.T. Barrett remains a work in progress as he grows into the position. And defensively, Ohio State still has something to prove when it comes to stopping the pass. The good news: This program is ascending under Urban Meyer and may be ready for a national title run next season.

Will Michigan State win it all? – Robert Fisher

If by ?win it all? you mean the Big Ten, then I say ?yes?! This team has the fewest potential fatal flaws than any of the other contenders, specifically Ohio State-this week?s opponent. The Spartans have had some issues at safety, but the position seems to be settling. Keep an eye on Connor Cook. He needs to pick up the pace. He has hit over 54 percent of his passes just once in the last four games-and that was against Indiana, which doesn?t exactly have a steel curtain defense. Cook must regain the form he showed late last year when he was named MVP of the Big Ten title game and Rose Bowl.

Are your power rankings serious or meant to be satirical? In what universe could Wisconsin be ahead of Nebraska? I guess it will play itself out, but this is strange. – Austin

Strange? What has Nebraska done lately to impress you? The Huskers looked average vs. Purdue. And all Bo Pelini did after Nebraska beat Rutgers two weeks ago was bemoan his team?s performance. I just think AT THIS VERY MOMENT, Wisconsin is playing better and is a notch better than Nebraska. As you said, the Huskers will get their chance at Wisconsin in Madison on Nov. 15.

Two things: Is Wisconsin legit? Do you perceive the offensive coordinator for Wisconsin as not trusting the running game? It seems Wisconsin often passes-not a strong suit-one 3rd-and-fives. – Thomas

I think OC Andy Ludwig trusts the running game. The Badgers have the No. 1 rushing attack in the Big Ten, for crying out loud, averaging 333.4 yards. What?s not to trust with Melvin Gordon and Corey Clement running behind another monster line? It?s the passing game that still may be Wisconsin?s undoing, as it ranks No. 13 (143.6 ypg) in the league. Only Minnesota is worse. Bottom line: This team is very legit and just may win the West-largely because of the run game and killer defense that is No. 1 in the Big Ten in scoring (14.1 ppg) and No. 1 overall (253.8 ypg).

How important are bye weeks? Iowa has to play four teams that will have byes before playing the Hawkeyes. – MTnman

There are good arguments for and against byes. If a team is playing well, it often wants to keep playing. Why stop the momentum? If a team is struggling, the down time can help the players and staff regroup. The off week also can help with injuries-as well as game prep. What coach wouldn?t like extra time to watch film, study and practice? The situation Iowa faces doesn?t seem fair. But, again, it often comes down to how a team wants to spin its situation. I say look for the positives.

Oh, so you wanna play my game? OK. The Cornhuskers? final three games are at Wisconsin; vs. Minnesota; at Iowa. I?m gonna have to sell. I don?t see Nebraska losing all three of those games. I could see them losing two: at Wisconsin and at Iowa. But I think the Huskers will take care of the Golden Gophers in Memorial Stadium, especially after losing to Minnesota last season. So, worst-case scenario: 1-2. Best-case scenario: 2-1. I just don?t see the Huskers winning out.

Why would you bump Iowa ahead of Maryland two weeks after Maryland had a pretty solid win against the Hawkeyes? – Eli

Good point, but the rankings all aren?t about head-to-head meetings, which Maryland did win on its home field. Yes, they are important. But a team?s entire body of work is most important. I like how Iowa is playing at this point-just a bit better than Maryland.