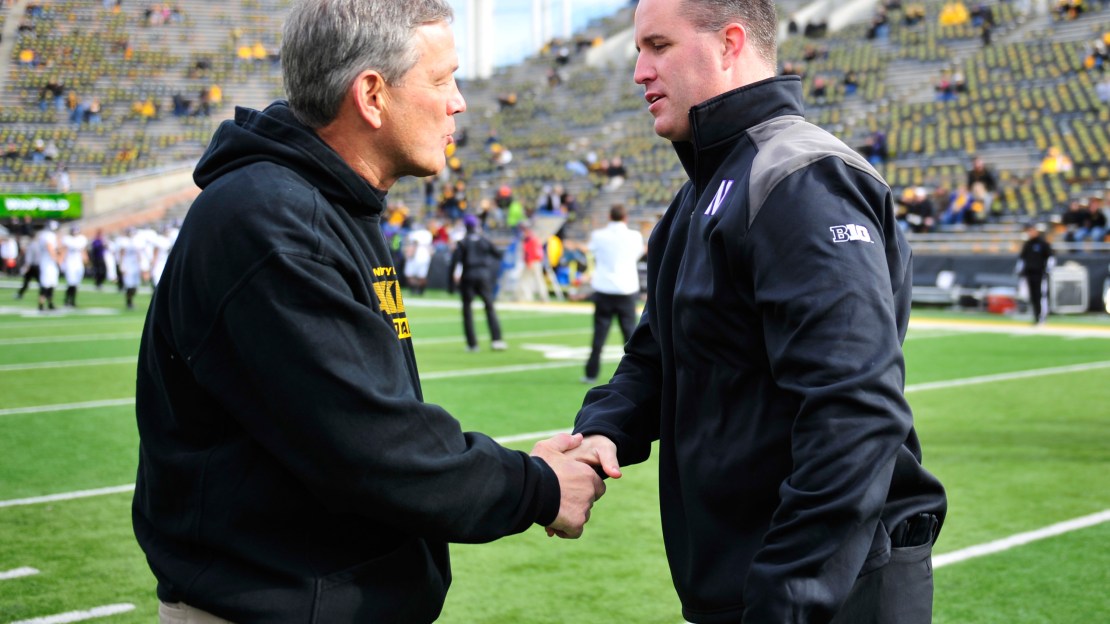 The calendar will say ?November? on Saturday. And, as football coaches like to say: ?November is when they play the games to remember.?

But the first Saturday of November lacks any apparent marquee games, with No. 5 Michigan State idle, No. 13 Ohio State hosting Illinois and No. 16 Nebraska entertaining Purdue. Minnesota is idle, too.

Maybe could there be some upsets? Maybe.

My favorite game this week is the underrated Northwestern-Iowa rivalry. This one's been a lot of fun in recent seasons, and both teams need this win to stay in the wild Big Ten West race.

See my Week 10 previews and game rankings below.

2. Maryland (5-3, 2-2) at Penn State (4-3, 1-3) – noon ET, ESPN2. The only way to describe the Penn State-Maryland series is ?lopsided.? The Nittany Lions are 35-1-1 all-time vs. the Terps. Maryland?s lone win came in 1961; the teams tied in 1989. The schools haven?t met since 1993. Each team looks to rebound, as the Terps have lost two of three. And in each of the two losses, Maryland has allowed 52 points. The Nittany Lions have lost three in a row after a 4-0 start. A win vs. Maryland could kick start PSU, which has Indiana, Temple and Illinois after meeting the Terps. This is essentially a game to determine the third-best team in the East.

3. Wisconsin (5-2, 2-1) at Rutgers (5-3, 1-3) – noon ET, ESPN. The Badgers may be ready to roll. They are coming off a dominating 52-7 victory vs. Maryland. The Wisconsin defense is playing as well as any in the Big Ten, leading the league in scoring defense (16.1 ppg). And the offense showed life vs. Maryland, notching 527 yards with 216 yards passing. That's bad news for the Scarlet Knights, who have allowed 98 points and 1,040 yards the past two weeks. This is part of a killer run for RU, which has played at Ohio State and at Nebraska the last two weeks. These teams never have met.

4. Indiana (3-4, 0-3) at Michigan (3-5, 1-3) – 3:30 p.m. ET, BTN (Watch on BTN2Go). Yes, Indiana has lost 18 in a row to the Wolverines and 33 of 34. The lone IU win was in 1987. But the Hoosiers have made the Wolverines sweat the last three meetings. Both teams enter this game struggling. The Wolverines are coming off a 35-11 loss at Michigan State, the team?s fourth loss in five games. The offense is a mess. Indiana can relate to a struggling offense, as injury has forced IU to use its third-string quarterback as it looks to end a two-game skid and notch its first Big Ten triumph. Bowl hopes are dwindling for both teams.

5. Purdue (3-5, 1-3) at Nebraska (7-1, 3-1) – 3:30 p.m. ET, ABC. The Cornhuskers look like they may be the cream of the crop in the Big Ten West. This visit from Purdue may be a chance for the Huskers to flex their considerable muscles. Nebraska has looked good the last two times out since losing at Michigan State, dumping Northwestern and Rutgers. The Boilermakers were off last week, presumably giving them time to improve on defense. But, it probably wasn?t enough time. The last two games (both losses), the Boilers have allowed 532 yards and 450. Stopping this dynamic Nebraska offense-No. 2 in the Big Ten in total offense (514.8 ypg)–will be tough. Purdue will be making its first trip to Lincoln, Nebraska-and one of Bo Perini?s best teams will be waiting. The Cornhuskers smashed Purdue last season in West Lafayette, taking a 44-7 decision that wasn?t even that close.

6. Illinois (4-4, 1-3) at Ohio State (6-1, 3-0) – 8 p.m. ET, ABC/ESPN3. The Illini are coming off their first Big Ten win of 2014 and their first league home win since 2011, downing a hot Minnesota team. The defense actually made some key plays and looked OK, scoring the winning points on a fumble recovery. But this trip to Columbus will be daunting. The Buckeyes have won five in a row, coming off an emotional double-overtime win at Penn State. The Illini have lost six in a row and are 1-9 in their last 10 games vs. Ohio State in the battle for Illibuck. OSU scored 60 points on Illinois last year and 52 in 2012. You get the picture. The Illini?s last win vs. Ohio State came, ironically, in Columbus in 2007, when Juice Williams led a monster 28-21 upset of the No. 1 Buckeyes en route to taking Illinois to the Rose Bowl. That seems like 50 years ago, doesn?t it?