Volleyball Report: It's time to hand out some midseason hardware! 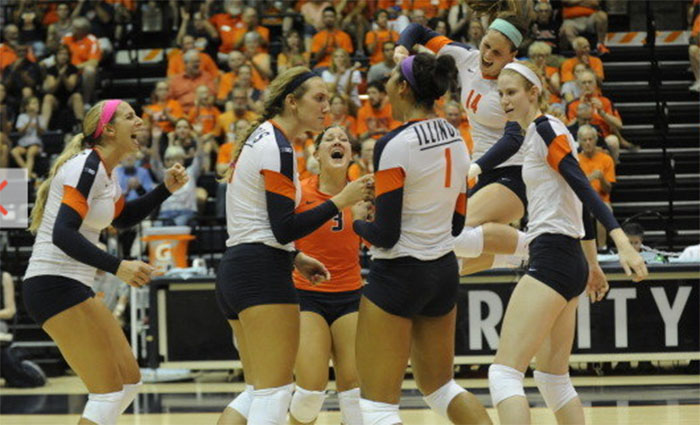 After five weeks of conference action, the standings have started to shake out, with the more experienced squads rising to the top and the younger teams still trying to find themselves.

Wisconsin returned every starter except one from last year's national runner-up squad, and it owns the top spot after rattling off nine straight wins.

Illinois also returned all but one starter, and if it were not for a shocking comeback from Ohio State, down 14-10 in set 5, the Illini would be tied for first place.

Purdue has several freshmen in the lineup, but with upperclassman Val Nichol, Annie Drews and Amanda Neill in key spots, the Boilers started 6-0 before dropping two matches in the last two weeks.

Defending Big Ten and national champ Penn State is among the group tied for second place, and it has used a combination of freshmen and veterans to keep it within striking distance.

A lot can change in the remaining 10 matches of the Big Ten season, but here are the early contenders to take home the hardware in December.

Since the addition of the Setter of the Year award two years ago, this honor has been the de facto Big Ten Offensive Player of the Year. But through the league?s first 10 matches, no player has had a greater impact on her team than the Penn State setter. The arguments over who is the better setter between Hancock and Wisconsin?s Lauren Carlini will not cease anytime soon, but Hancock deserves the nod in terms of overall impact on the outcome of matches.

The senior has guided Penn State to the best hitting percentage in the conference (and the nation) and changes the course of sets and matches with her serve. Despite being surrounded by three newcomers, two on the outside and one in the middle, the 2-time Big Ten Setter of the Year has the Nittany Lion attack hitting .297 against a challenging road-heavy first-half schedule. Add in that Hancock leads the conference in assists per set in Big Ten play and few would doubt her contributions running the Penn State offense.

As for her nation leading serve, Hancock has twice as many service aces (33) than any other player in Big Ten matches and that does not account for the number of times she creates overpasses or allows Penn State to get points off of out of system balls by its opponents. It is hard to believe that in her fourth year Hancock is going to out-do herself by breaking her own school record for service aces in a single season, but she will. Hancock has 82 aces with at least 10 matches left, 10 shy of breaking her record of 91 from 2011. Can she go after the conference single season record of 113 by Minnesota?s Sharon Oesterling from 1989? It seems within reach, assuming she can keep up her current pace.

Hancock?s contributions as an attacker herself also cannot be overlooked. Overall this season, Hancock leads all Big Ten setters with 93 total kills and a kills-per-set average of 1.21. For perspective, only one other conference setter has more than one kill per set (Michigan State's Rachel Minarick – 1.13), and only two other setters are even within 25 kills of her season total. Add in that she is the third-best blocking setter in the Big Ten, and it is hard to imagine a more fitting pick for the conference?s best player of the first half.

If you have watched Wisconsin this season, this award should not come as a surprise at all. Morey is the best back-row player on a team that has frustrated every opponent this season with its exceptional defense and passing. The Badgers have prided themselves on ball control since the arrival of Kelly Sheffield, and it is one of the major reasons why they are alone atop the Big Ten standings.

Morey leads the Big Ten in digs per set in conference play with a 5.48 average and has put up staggering numbers even in short matches. The Muncie, Indiana, native had 29 digs on Sunday against Nebraska in just three sets to break her own rally scoring era record for a three-set match of 26 digs from earlier this year. Morey has tallied double-figure digs in all but one match and Sunday?s effort was her ninth with 20-plus digs.

Morey has been called one of the best players to ever come out of Muncie by her head coach, also a Munice native. Her addition to the Badgers has been vital to their return to the top of the conference. Morey is known as an intense, sometimes angry player, and Wisconsin has used that anger to fuel a nine-match win streak to the top of the standings.

The conference office does not double up its awards, so despite Hancock being the pick for Midseason Player of the Year, we will differentiate and go with Carlini as the Setter of the Year. And she is, without any hesitation, deserving of this honor.

Put a ball within the vicinity of Carlini, and she is going to make it hittable for her teammates. She used her exceptional skill-set to lift the Badgers to their first NCAA title match appearance since 2000 last season, and she has picked up right where she left off. The differences as a sophomore have been subtle, according to her head coach, but she is becoming an even better setter in her second year.

?Lauren a year ago would automatically check off if she set it to someone and they had a hitting error,? said head coach Kelly Sheffield. ?This year, she really understands why things work and why things didn?t work.?

Carlini has also improved her overall game and that has been apparent when watching her this season. Last year?s Big Ten Freshman of the Year is now healthy enough to contribute more defensively than she did in her first season, and she ranks second for Wisconsin in digs per set overall and 14th in Big Ten play with 3.13 per.

Serving has been another improvement, as Carlini has a better ace-to-error ratio than a season ago and is 2nd in conference action in aces behind Hancock. Carlini is also a threat attacking and had a career-high 10 kills against Nebraska on Sunday to lead the Badgers.

The debate will rage on between Carlini and Hancock for the Big Ten?s top setter, but depending on how the final 10 matches play out, both will make a strong case for both Player and Setter of the Year.

This fall saw one of the largest influxes of young talent to the Big Ten in recent memory. Penn State, Purdue, Michigan State, Michigan and Nebraska all brought in top 10 classes that included some of the best hitters in the nation. By the end of the season, one of those hitters may claim the top freshman honor. Right now, though, the honor goes to Illinois libero Brandi Donnelly.

Donnelly is third in the Big Ten in digs per set this season and has been consistent throughout the conference year, avoiding some of the freshman moments that come with inexperience. Donnelly also ranks, as of last week, fourth in the nation in digs per set among all freshman in Division I volleyball.

The only true newcomer to the Illini lineup this season, Donnelly had to replace the program?s all-time leader in digs, Jennifer Beltran, and has allowed Illinois to avoid a drop-off in its backrow play after Beltran?s departure. A two-time Big Ten Freshman of the Week selection, Donnelly has been in double figures in digs in every conference match this year, including four matches over 20 digs. Two of those 20-plus dig matches came against Nebraska and Purdue, victories over top 15 opponents, that has Illinois one match out of first place.

Of all of the award races, this one is probably the most wide open. In year?s past, this honor has gone to either a hitter with big numbers or a setter who runs an offense in her first year to a top-half finish in the Big Ten. Penn State?s Ali Frantti is the top freshman hitter, at the moment, and the nation?s number one recruit, Haleigh Washington, is finding her stride with another 10 matches to play. If Frantti or Washington were the go-to threat for the Nittany Lions this would be an easy pick, but with so much balance for Penn State, the conference office may not be overwhelmed by their numbers enough to give them the award. Northwestern?s Symone Abbott ranks in the top 10 in kills per set this season but usually awards are reserved for teams in the Big Ten title hunt.

Rarely is the Big Ten Coach of the Year given to anyone but the leader of the Big Ten Champion. If the season ended today, that would be the Badgers.

Sheffield has had more to work with in the first half of his second season in Madison due simply to the fact that his team has been healthy. With Carlini taking the logical next steps in her sophomore season and the rest of the team being more familiar with what Sheffield wants as a head coach, Wisconsin has rattled off nine straight wins in the Big Ten. That type of run is typically reserved for eventual national champions.

Compared to last season, a memorable year but still a "goulash" of a lineup early on, the Badgers are hitting 50 points better as a team, .283 up from .233, and have improved their numbers in all six other statistical categories. Particularly impressive this season has been the improvement blocking from the non-conference season to Big Ten play. In the first four weeks of the season, Wisconsin averaged 1.82 blocks per set as a team, ranked last in the conference. Since the Big Ten opener, the Badgers have averaged three blocks per set, which ranks second in the league. A lot of that has to do with scouting, knowing matchups and putting players in the right spot to execute, and that credit goes to Sheffield and the Wisconsin staff.