Should Ohio State QB J.T. Barrett be in the Heisman discussion? 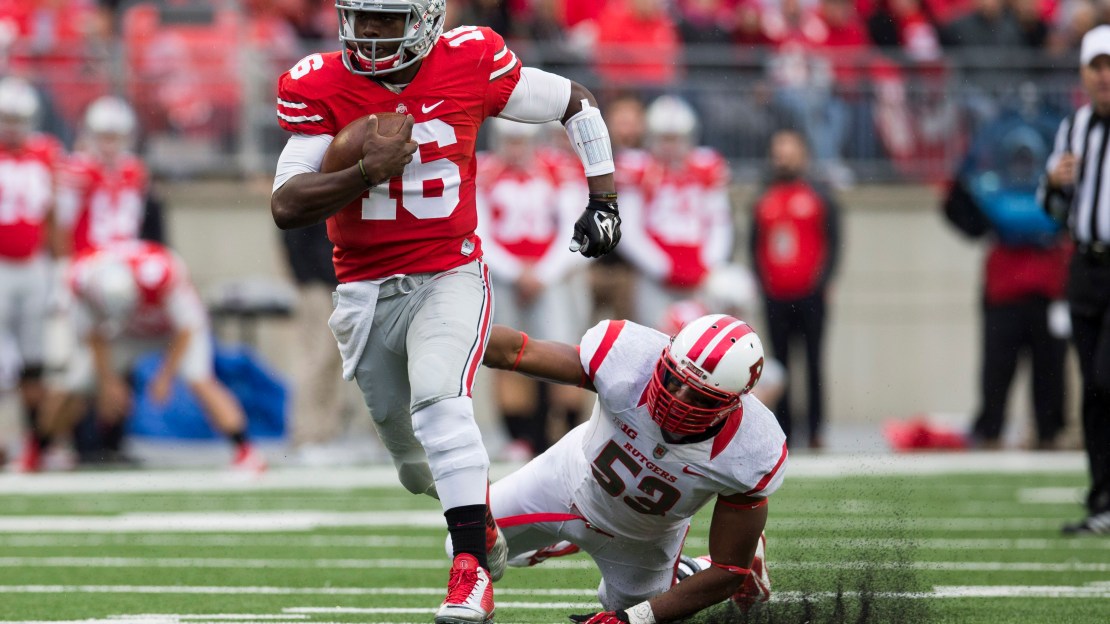 To win the Heisman Trophy nowadays, a player pretty much has to suit up for a national power school and play quarterback. White-hot Ohio State redshirt freshman J.T. Barrett checks both of those boxes.

He also checks the all-important box of compiling Heisman-like numbers.

In Ohio State's six games, the first six starts of his career, Barrett is completing 65 percent of his passes for 1,615 yards, 20 touchdowns and five interceptions, to go along with 383 yards and four touchdowns on the ground.

Even better: Barrett has 17 touchdowns, to one interception, in his last four games. He continues to get better each week, even if he has yet to face a top-flight defense.

So, should he be in the Heisman discussion following Week 8?

One high-profile analyst isn't so sure.

So JT Barrett is a Heisman candidate now? Great numbers, sure, but against Kent St, Cincinnati, Maryland & Rutgers. Hold off til 11/8.

OK, that's fair. We should wait and see what Barrett does vs. reigning Big Ten and Rose Bowl champ Michigan State before crowning him.

But, the fact he hasn't played several great defenses shouldn't keep him out of the discussion. After all, being in "the discussion" is what helps these players ultimately make it to New York City.

The way Barrett is torching opponents, he should, at the very least, be in such a discussion.

He deserves it, especially when one compares Barrett's numbers to two of the frontrunners.

Speaking of the Heisman, while we're at it, Barrett isn't the only Big Ten star who deserves Heisman consideration.

How pretty is the top of the NCAA rushing yards leaderboard, @B1Gfootball fans? pic.twitter.com/Kwk17F9KVa