Volleyball Report: Is this the year a non-traditional power wins Big Ten? 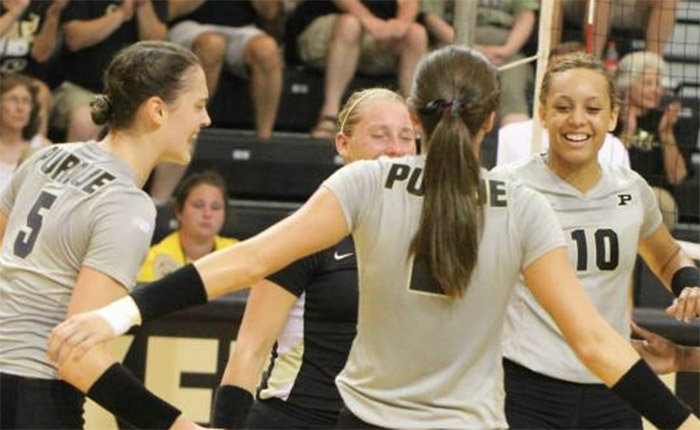 Is this the year? Is this finally the year that after all the talk of parity, that one of the non-traditional power programs claims the Big Ten title? After six league matches, the 16-time Big Ten champion Penn State is not atop the standings, nor is perennial contender Nebraska. Instead, it is the Boilermakers owning the only unbeaten record remaining in the nation?s top volleyball conference after three weeks.

Purdue is 6-0 in Big Ten play for the first time since 1983, thanks in large part to the play of senior setter Val Nichol. The third team All-American from a year ago has played many roles for the Boilermakers in her four years in West Lafayette; in her final year, though, she has emerged as one of the top setters in the Big Ten. Last year, she spilt time with then-senior Rachel Davis and led the team in kills while also running the attack as part of the 6-2 setter system. Considering her dual role, Nichol should have been on the short list for any conversation regarding the Big Ten Player of the Year last season.

In the 5-1 offense this year, Nichol has Purdue hitting .293 as a team, which ranks second in the Big Ten and fifth in the nation as of last week. Nichol excels in so many different areas of the game, which is clear just in her stat line from Purdue?s last match against Indiana.

The Boilermaker setter accounted for seven kills, two aces, seven digs and seven blocks in four sets against the Hoosiers, a total of 16 points before you even factor in her 34 assists. A player who not only touches the ball on every rally but can contribute points from the setter spot on the attack, as well as defensively, is special and virtually a requirement in this league if you want to contend for a conference title.

Nichol did not arrive on campus as a polished setter ready to run the offense her freshman year, but that did not keep her head coach Dave Shondell from having lofty expectations for one of the program's top recruits.

Prior to her first season in the fall of 2011, Shondell said that Nichol had the ability to be the national team setter down the road before she had even played a match. Nichol would be an outside hitter for her first two seasons, while setting sparingly, before playing both spots last year. The Normal, Illinois, native had all of the athletic requirements necessary to set at a high level but did not have the mentality to take on that role early in her career.

?It has taken me three years to realize that I came in as a very selfish player,? said Nichol. ?I came in saying, I know what I am doing, I?ve been doing it long enough, I was good enough to get here and that all changed with the help of my coaches.?

Shondell has seen that change and it has been evident in her development over the course of her career.

?I know it was not easy for her to accept change and to do things she is not as comfortable with,? said Shondell. ?She was very comfortable coming to Purdue as a hitter and we planned on molding her and shaping her into what we think is one of the top setters in the country. She knew the plan and she wanted it.?

Nichol and her teammates are looking to build off the success of the first three weeks and keep the Boilermakers in contention for their first Big Ten Title since 1985. However, the challenge reaches the next level this week, as Purdue faces defending Big Ten and national champ Penn State on Friday night. Nichol will need to continue to set her teammates efficiently and look for her own attack for the Boilers to keep their eight-match win streak alive.

?Val wants to win, if there is one thing about Val Nichol, it is that she is as competitive as any player I have coached at Purdue,? said Shondell.

It's hard to take away from Purdue?s 6-0 start, but, as stated last week, the Boilers have faced either ailing or cellar dwelling Big Ten opponents thus far. Rather than rushing to call them a definite contender for the remainder of the season, along the lines of last year?s Michigan State team that also started 6-0, judgment should be reserved until after the next few weeks. A lot will be learned in the Penn State match Friday but until a few ranked opponents fall at the hands of Purdue, Big Ten Title contender status should be put off.

Purdue is the lone perfect team, but no team had a better eight-day stretch than Ohio State. The Buckeyes defeated three ranked opponents in consecutive matches for the first time in program history and did it in dramatic fashion. Between two-hard-to-fathom fifth set comebacks against No. 8 Nebraska and No. 15 Illinois, as well as holding off No. 24 Northwestern, Ohio State had a string of remarkable performances. Looking strictly at the schedule, you could make an argument that the Buckeyes have been the Big Ten?s best team through six matches.

Teams simply do not beat Penn State at Rec Hall. The Nittany Lions came into last week having won 93 of their last 95 Big Ten home matches, and despite a new lineup this season that number looked likely to grow. Illinois had a different idea, as the Illini beat Penn State on its home floor for the second time in four seasons and silenced the Blue and White crowd that is used to leaving Rec Hall celebrating wins. Jocelynn Birks and Liz McMahon were outstanding but a lot of the credit goes to setter Alexis Viliunas, who handled the switch back to the 5-1 well, allowing the Illini to hit .315 against the Nittany Lions. Illinois, much like Nebraska, could be 5-1 in Big Ten play right now if not for a freakish comeback by Ohio State from down 14-10 in set five last Wednesday night.

The Gophers had a chance to erase a three-match losing streak last weekend when the welcoming sight of Maryland and Rutgers came to the Sports Pavilion. After a lineup change that put both Tapp sisters in the front row at the same time – Hannah in the middle and Paige on the right – Minnesota swept both Big Ten newcomers. Wednesday?s match will be a good test to see the improvements the Gophers have made since the losing streak.

Wisconsin swept both Rutgers and Maryland as well last week and looked polished in its last win against a ranked opponent, when it beat Illinois in four sets on Oct. 4. Senior outside Ellen Chapman may not be hitting for big numbers, but she came through with two crucial kills to end the match against the Illini. If this one is tight, look for the Badgers to set Chapman again in pressure moments.

The Hawkeyes have yet to take a set in Big Ten play, with only two sets of the 18 played being decided by the two-point margin. Bond Shymansky is trying some new things for Iowa and catching Illinois off guard might be the Hawkeyes' best chance. The Illini are coming off their biggest win of the season and know they will have the tremendous challenge of facing Nebraska in Devaney on Saturday. If Illinois looks past Iowa, there might be a slight chance for Iowa to win a set, but it will be unlikely that Iowa ends up in the win column on Wednesday night.

There is no need to panic if you are a Penn State fan. The Nittany Lions may have already matched their Big Ten loss total for the past two seasons in the first three weeks, but fixing correctable errors should right the ship. Last Saturday against Illinois, Penn State let a 19-8 lead slip away in set one and then got off to slow starts in set three and four.

Even a young team that is still searching for its best lineup won?t give away 11-point leads more than once, maybe twice, in a season, and despite not playing their best, the Nittany Lions could have still been up 2-0. Add in the encouraging sign of No. 1 recruit Haleigh Washington having a breakout night of 14 kills and 7 blocks and there were positive signs in the loss.

Friday begins the real challenge of Big Ten play for Purdue; including Penn State, the Boilermakers play five of their next six matches against ranked teams. Purdue has great balance, a talented setter, tremendous defense and ball control, which will allow it to win several of the next six matches, but if the Big Ten Title is the goal, Friday needs to be a statement win. The home match against the Nittany Lions will not make or break the Big Ten Title hopes of the Boilermakers, but it would be a big step towards contention.

Penn State is still having issues with its block, meaning the matchup to watch will be between Annie Drews and whoever is looking to block the Boiler right side, likely a combination of Aiyana Whitney, Ali Frantti and Megan Courtney. Drews leads the conference in kills per set and has been in double figures in every Big Ten match this season. If the Nittany Lions do not get good touches and a few stuff blocks on Drews' swings, the Boiler Box could be an unforgettable scene Friday night.