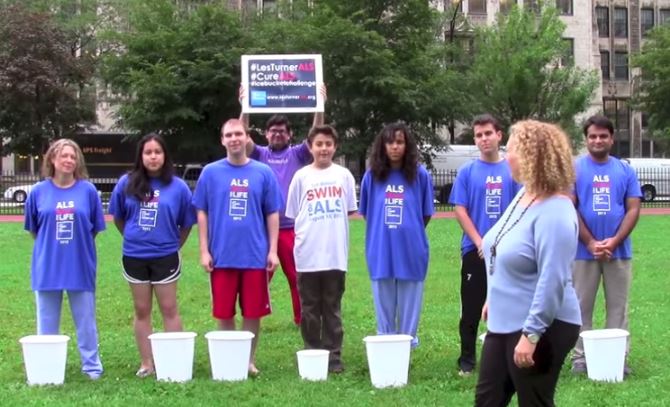 Like the pop song ?Fancy,? the Ice Bucket Challenge that raised awareness and funding for Amyotrophic Lateral Sclerosis (ALS) research was an inescapable phenomenon this summer.

One organization that received a significant boost in donations as a result of that campaign was the Les Turner ALS Foundation in Chicago. For more than 30 years, the Foundation has funded groundbreaking research at some of the country?s best universities and hospitals, and this summer?s trend brought a spotlight to their cause.

That spotlight came at a great time, because research being done at Northwestern University is making incredible breakthroughs thanks in large part to their relationship with the Foundation - and the innovative work of one remarkable professor at NU.

The journey of Dr. P. Hande Ozdinler, Ph.D., to Northwestern is as unique as the research she is doing.

Born in Turkey, Ozdinler quickly climbed the academic ranks. After finishing a double master?s degree in chemical engineering and molecular biology (with an emphasis on biotechnology), she moved to the United States to pursue her doctorate at LSU.

However, losing her brother to a stroke at 23 changed her career course.

?If my brother didn?t die, I think I would be making smart tomatoes or engineering trees,? she said. ?I realized I knew very little about the brain. When I lost my brother I decided to change fields and study neuroscience. At the time it was hard - I had just moved to the United States, I didn?t know anything about neuroscience. How am I going to make this change?

?I remember my first class at medical school. Imagine: My brother just died from a stroke, my teacher doesn?t know anything about this, and he brings in a human brain to the table and says, ?This is the brain of a young boy who just died of a stroke.??

Ozdinler successfully navigated the change of career - and the emotions involved in the choice - and successfully completed her PhD and began practicing medicine. However, working with individual patients was a different story.

?When I started seeing patients, my first was a Parkinson?s patient,? she said. ?It was very hard; I cried in the room with them. Another doctor told me ?You can?t cry in the room with a patient,? and I realized I couldn?t be a doctor because it?s emotional. All we can do is detect the disease and tell them there?s no cure.?

Wanting to find a cure, her career went yet another direction.

When it came down to deciding where to do her research, Ozdinler had another choice to make: Northwestern or Harvard. After weighing her options, Ozdinler decided Chicago would be home.

?I met with the people from the Les Turner Foundation, and that was the tipping point,? she said. ?I told them I wanted to start a new research center and that I not only want be a leader in the field, but also want to create an environment for collaboration. My goals and those of the Foundation were aligned.

?I realized Northwestern is where I should be and where I can make a difference.?

Ozdinler and Northwestern have made incredible progress in the first five years. In 2012, the National Institute of Health (NIH) received close to 70,000 grant applications, and only 15 percent of those received any grant money at all. Many labs apply every year, hoping to receive funding at some point. On her first application, Dr. Ozdinler received two grants in the same study section from NIH, a rare accomplishment that speaks volumes about the impact of the work she?s doing.

Recently, Dr. Ozdinler?s group has made a number of discoveries that are leading the charge to beat ALS.

?An ALS patient?s cognitive functions are still there,? she said. ?They can still remember, think - have understanding, memory - those abilities are intact. But they lose their ability to move. Why are those neurons vulnerable and not others??

At Northwestern, Dr. Ozdinler?s team has isolated the motor neurons in the brain that die due to ALS and, for the first time, marked them in a way that they can be better studied.

?When I entered the field, there weren?t many resources or tools to work with,? she said. ?Because of the collaborative environment at Northwestern, and our relationship with the Les Turner Foundation, I believe we?re getting closer to understanding ALS.?