Buy or Sell: J.T. Barrett should start over Braxton Miller in 2015? 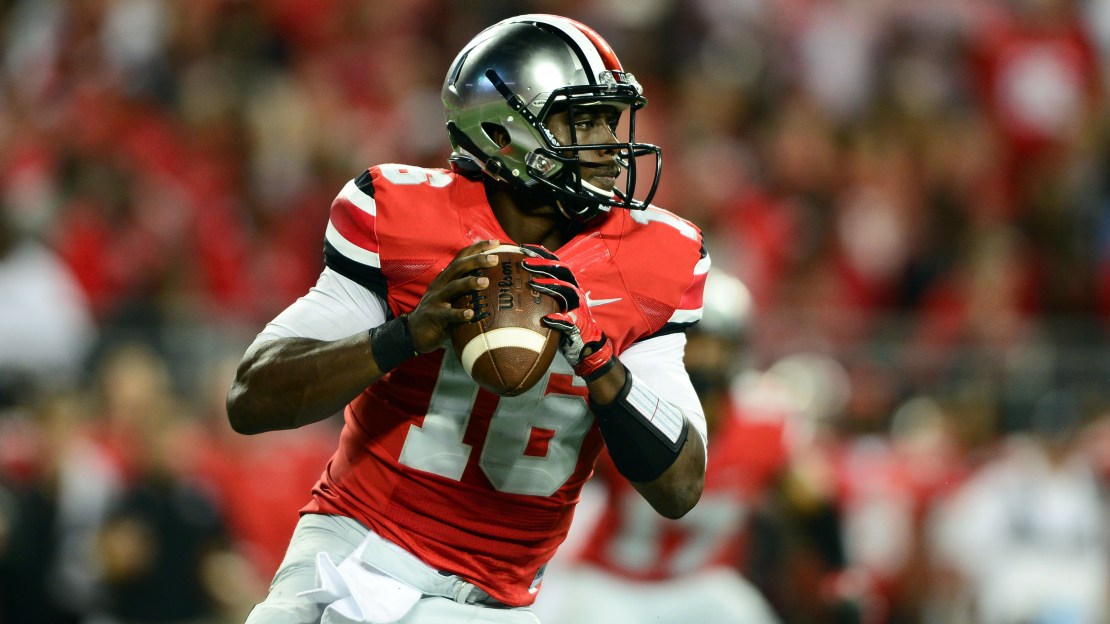 As I wait for kickoff on Saturday, here?s what I?m buying and selling.

Nebraska is the most talented team in the West?

Buy. The Cornhuskers have more talent than any team from 1-85 in the West. Sorry, Wisconsin and Iowa. But, it?s true. This team just ran into a buzz saw at Michigan State last week. Nebraska may not lose a game vs. a Big Ten West foe this season. And, it wouldn?t be a shock if the Huskers got another crack at the Spartans in the Big Ten title game in December in Indianapolis.

Sell. I don?t see it happening. The Wolverines will be fortunate to win two conference tilts. Check out Michigan?s remaining schedule: Penn State; at Michigan State; Indiana; at Northwestern; Maryland; at Ohio State. Do you see more than two conference victories? Who saw this coming? Exactly.

J.T. Barrett should start over Braxton Miller in 2015?

Buy. Yes, I know this is a long ways away. But, I?m already leaping forward. Why? Because I can. I know Urban Meyer said this is Miller?s team when he returns from a shoulder injury that has him sidelined this fall. But I think Barrett is a better option under center. Yes, Miller is a wondrous athlete and a two-time league player of the year, but Barrett is developing into a better all-around quarterback. And that?s what it takes to beat elite teams. Tucking and running won?t get it done vs. the big boys. Ohio State should have learned that at the end of last year in losses to Michigan State and Clemson. Either way, it?s a nice problem for OSU to have.

Sell. The Scarlet Knights have bolted out of the gate with a 5-1 mark. And they are just three points from being 6-0. Kyle Flood?s crew has been a big surprise. Congrats. But the party may be over, as the lifting gets appreciably heavier from here on out: at Ohio State; at Nebraska; Wisconsin; Indiana; at Michigan State; at Maryland. RU will be hard-pressed to win more than two of those six games.

Nebraska?s Tommy Armstrong is the best quarterback in the West?

Buy. Look at the roster of starting signal callers in this division. Not overly impressive, especially with Illinois? Wes Lunt now out 4-6 weeks with a broken leg. The Illini start Reilly O?Toole; Iowa has Jake Rudock; Minnesota has Mitch Leidner; Northwestern has Trevor Siemian; Purdue has Austin Appleby; Wisconsin has ? who? See what I mean? Sure you do. This makes the odds of the Big Ten champ coming from this division even longer.

Purdue will avoid the West cellar?

Buy. The Boilermakers may have turned the corner to a degree with that win last week at Illinois. However, Purdue may be fortunate to win one more game. Regardless, the one Big Ten triumph for Purdue figures to be one more than the Fighting Illini, who will be hard-pressed to win another game in 2014 with Lunt out and the defense struggling mightily.

C.J. Beathard should start over Jake Rudock for Iowa?

Buy. This seems simple to me, as the Hawkeye offense has been more responsive under Beathard than it has under Rudock. Beathard?s arm is better able to stretch defenses and open room for the ground game. Just flip on the film and watch. Alas, Iowa coaches say Rudock will start this Saturday and both signal-callers will play. Here?s hoping this strategy doesn?t cost the Hawkeyes.

Northwestern is a sleeper in the West?

Buy. I love how Pat Fitzgerald?s team is coming on. The offense is getting some balance with the emergence of tailback Justin Jackson. The offensive line also is coming on, and an array of "superbacks" is being used adroitly. But it?s the defense that gives Northwestern its most hope to shock the world and win the division.