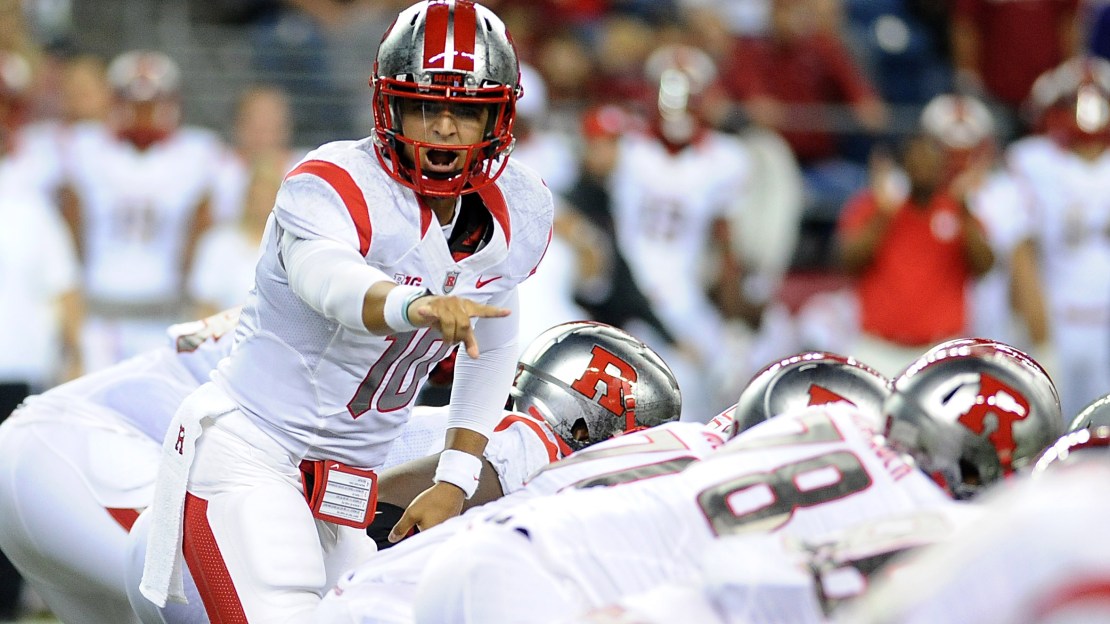 The breakdown and analysis of the Penn State at Rutgers is in full bloom. Look for RU to come after Christian Hackenberg. The Scarlet Knights need to get heat on the Penn State passer to take pressure off of their iffy secondary.

Another key: The running game. The winner of that battle just may be the winner of this game. The Scarlet Knights have a nice ground game. PSU? Not so much. You thinking what I?m thinking?

Is anyone else worried about Iowa?s issues running the ball? This by-the-committee-approach isn?t working.

Jake Rudock leads Iowa in rushing with 53 yards on 11 carries. Junior receiver Tevaun Smith is tied with sophomore running back LeShun Daniels as Iowa's fourth-leading rusher with 35 yards despite Smith having only one carry, while Daniels has 12. This just isn?t right. Combine those statistics with the likelihood that star left tackle Brandon Scherff will miss Saturday's game because of a knee injury, and there is reason to be concerned about Iowa's running game.

"I'm sure coach Ferentz will get on that, and I'm sure the offensive line is ready to address that," Rudock said Tuesday. "Obviously, here at Iowa we like to run the ball. That's apparent. The five guys up front, we'll figure it out. We'll get it going and run the ball well."

If you missed Brady Hoke on the ESPN?s SVP and Russillo show recently, you missed him going a good job defending himself and Michigan.

Hoke was asked if being a ?Michigan Man? buys him more time as the pressure to produce seems to be mounting.

"I don't know, I couldn't tell you that," Hoke said. "I, obviously, was eight years with Coach Carr and learned an awful lot and got re-educated into Michigan and what it's all about. I'll be honest with you, I never thought of that.

"The only thing I know, we're going to do a great job of coaching these kids. We've got a group of kids who are working unbelievably hard together and we're going to be the best Michigan football team that we can."

How many Big Ten games can this team win this season? Four? Five? Six?

While the Michigan offense tends to bear the brunt of criticism, the defense hasn?t exactly ripped it up, either. The unit?s press coverage was torn asunder by Notre Dame last week. Coordinator Greg Mattison takes notes, saying it?s his job to fix. Yep.

"They beat us, they beat us," Mattison said. "Their wide receivers did a nice job with double moves and the ball was out quick and the quarterback put it on the money. There was a couple where I was saying 'you've got to be kidding me,' the coverage wasn't awful, but he put it right there.

"One thing we have to do is maybe go back and forth between some zone and man, so they don't know exactly what you're in all the time."

This unit should not be struggling, given the experience and talent it possesses.

Mike Griffith has the pulse of Michigan State as well as anyone. And he has identified five Spartans who are off to slow starts. RB Jeremy Langford is on top of the list. Did you know he now has gone three games in a row without rushing for 100 yards?

Doug Lesmerises of Cleveland.com wonders if the Navy game played a role in Ohio State?s loss to Virginia Tech.

Since 2009, when Ohio State played the first game of this two-game Navy series, 18 power conference opponents have played Navy one week and come back against a major college opponent the next week. (Only Maryland smartly slipped in a lower-level week of recovery, besting Morgan State 62-3 the week after Navy in 2010.). Those 17 teams are 8-10 in the week after the Midshipmen.

Will Mitch Leidner play for Minnesota this Saturday at TCU. ?No doubt,? says Gophers TE Maxx Williams in this video.

Good. Because without him, I think Minnesota would struggle-and probably be a lock to lose.

Indiana is coming off a bye as it heads to Bowling Green. And, if you follow the Hoosiers, you know of their struggles on the road. QB Nate Sudfeld epitomizes them.

In road games a year ago, Sudfeld was one of the least effective QBs in the country. Out of 100 quarterbacks eligible to be ranked, Sudfeld was 94th in passer rating, completing 50 percent for 582 yards - and only 5.2 yards per attempt. In five home wins, Sudfeld ranked No. 8.

Big game for Maryland this Saturday vs. West Virginia, a big rival. Is the defense ready for the Terps? Air Raid offense?

This will be a nice test for Maryland, which gutted out a solid victory at South Florida last week. I still like this team as a dark horse. This game will help steel the Terrapins? resolve as they head to Big Ten play soon.