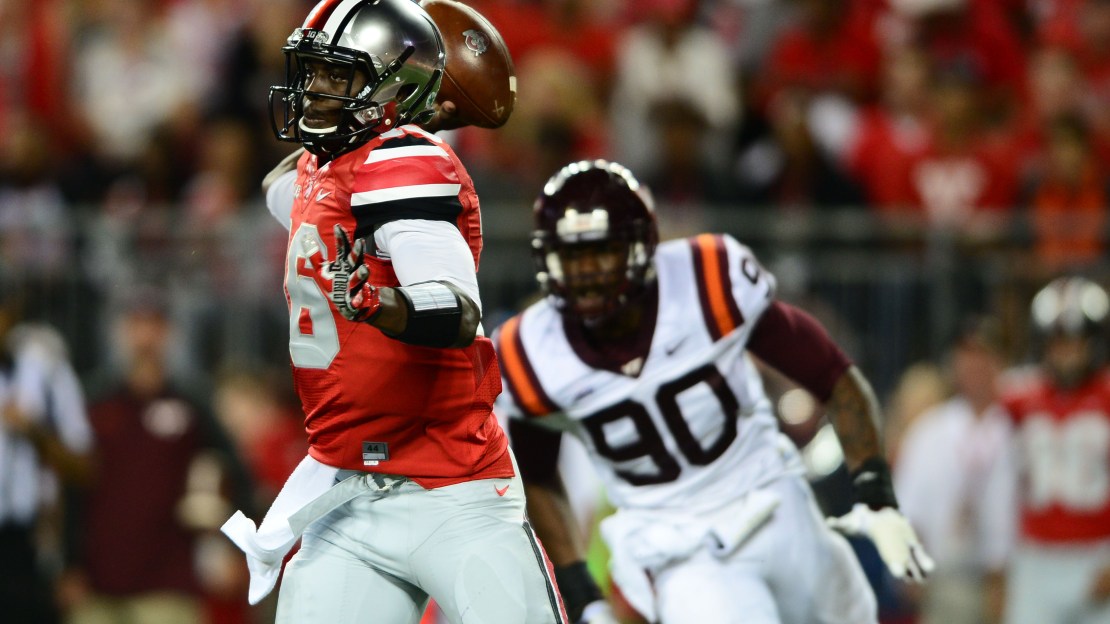 After a puzzling Week 2, which saw the Big Ten go 8-5 overall with two losses to teams from the MAC and  near-losses for Iowa (Ball State) and Nebraska (McNeese State), can anything really surprise you at this point?

I did some in-depth research and came up with 10 mind-blowing stats heading into Week 3.

1. The Big Ten has two quarterbacks on pace to pass for more than 4,500 yards this season.

Here's my favorite stat on the list. Big Ten signal-callers have put up some outstanding numbers through two weeks, but when it comes to the most impressive, Wes Lunt and Christian Hackenberg take the cake. In two games, Hackenberg has already thrown for 773 yards, while Lunt has totaled 741 yards. To put that into perspective, the leading passer in the Big Ten last season was Illinois' Nathan Scheelhaase, who threw for 3,272 yards. Both Hackenberg and Lunt are on track to pass that number by more than 1,000 yards. That's impressive!

2. Michigan State leads the Big Ten in sacks, but doesn't have a player in the top 25 in the conference in tackles.

This is the most puzzling statistic on this list. I know sacks and tackles don't necessarily go hand-in-hand and that teams award tackles differently, but the Spartans are widely considered to have the top defense in the conference. You can see that when looking at sack totals, as Pat Narduzzi's defense has already racked up eight in two games. However, despite those impressive defensive stats, the Spartans leading tackler is DE Marcus Rush, who has 13 tackles, which is tied for 30th in the Big Ten.

I wrote a piece last month, where I predicted that at least one freshman would rank in the top 10 of the Big Ten in receptions. I never expected a freshman to actually lead the conference in catches, though. That is the case heading into Week 3, as Hamilton has already hauled in a Big Ten-best 18 catches for 234 yards. One of the pressing questions heading into the season was if Penn State would be able to find a viable replacement for Allen Robinson? Hamilton looks like he could be the guy.

4. Minnesota ranks last in total offense in the Big Ten, but is one of eight unbeaten teams in the conference.

The Gophers are averaging 344.5 yards per game through two weeks, which ranks 14th among Big Ten teams. However, Jerry Kill's team is 2-0 heading into a Week 3 showdown with TCU. And it's not like the Gophers haven't put up points, averaging 38.5 points per contest, which ranks in the top 40 in the country. However, Minnesota ranks last in the conference in both passing yards (223) and total yardage (689) after two weeks. Confusing, right?

Through two weeks, James has accounted for 36 total points. That is 17 more points than the next player on the list. But what's even more impressive in the fact that James' 36 points is just three less than the 39 Northwestern's entire team has scored. Can the Scarlet Knight's talented back keep it up? We shall see.

6. Ohio State and Northwestern have combined to allow 15 sacks heading into Week 3. No other Big Ten team has allowed more than three sacks.

Ouch! Ohio State's 0-line really struggled in its Week 2 loss to Virgina Tech, while Northwestern has struggled in just about every aspect of the game. The Buckeyes have allowed eight sacks for 63 yards, and the Wildcats seven sacks for 64 yards. Next on the list? Penn State, with three sacks for 25 yards.

This is a program that had an open quarterback competition that went deep into the summer. Kyle Flood ultimately decided to go with Gary Nova, who lost his job late last season. Now, after two weeks, Nova leads the conference in passing efficiency, sporting a 199.2 rating, completing 65.3 percent of his passes for 569 yards and six touchdowns. He has thrown just one interception in 49 pass attempts. That's quite a statement for the Big Ten newcomer.

8. Michigan's defense has not forced a turnover.

This is a defense that features what many believe to be one of the Big Ten's top secondaries. However, through two weeks, the Wolverines have not forced a turnover. With Jake Ryan manning the middle, Frank Clark coming off the edge, and Blake Countess patrolling the secondary, you would think this unit would force its share of turnovers. Let's see if this stat changes in the Wolverines' Week 3 matchup against Miami (OH).

Barrett has impressed with his legs, and actually completed 80 percent of his passes in the Buckeyes' Week 1 win over Navy. However, last week's loss to Virginia Tech was a different story. The Buckeyes' redshirt freshman QB completed just 9-of-29 passes for 219 yards and three picks. In two games, Barrett has thrown four interceptions in 44 passing attempts. That's not going to work.

Yes, I know, Indiana has only played one game, to the rest of the conference's two. Still, the fact this program, which finished last in scoring defense (38.8 ppg) in 2013, allowed just 10 points to Indiana State in its opener is a surprise. In last year's opener, also vs. the Sycamores, the Hoosiers surrendered 35 points. It remains to be seen if this Indiana unit is improved, but there's no question it looked good in its 2014 debut.