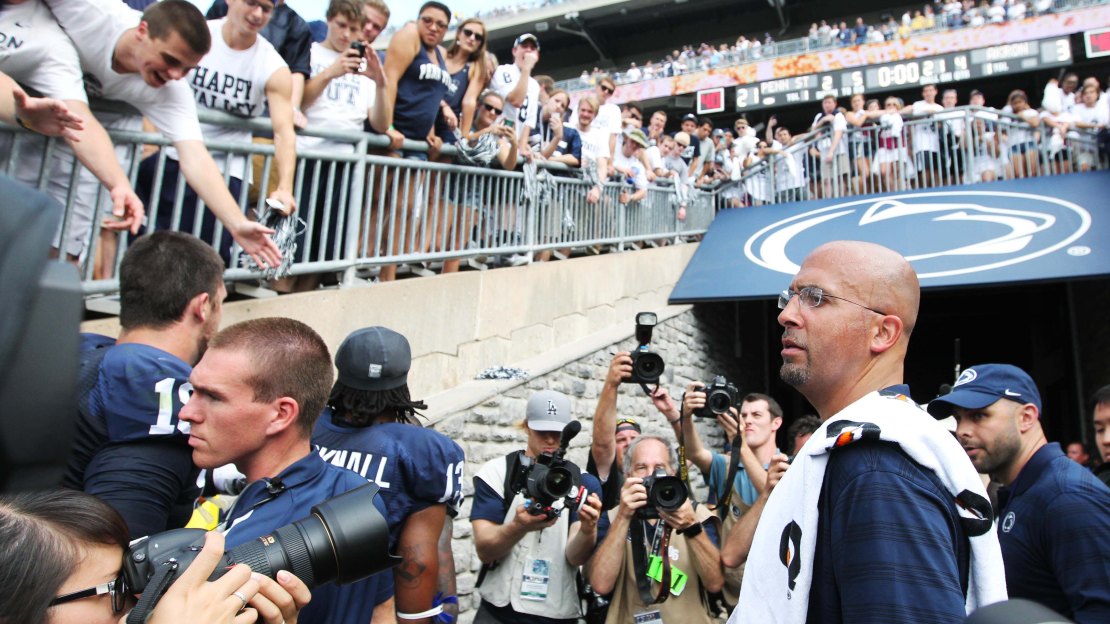 Here are the @NCAA tweets:

The NCAA has also returned all 85 football scholarships to Penn State, beginning in 2015-16. Read more: http://t.co/wW5nQxl8nF

There was no shortage of reaction to the news.

Today is a memorable day for these young men! The men who stayed together for each other! Today Penn State is back! pic.twitter.com/GoZXRLwL1X

Proud day for Penn State Football. All I can say is? Its about time. #WeAreBack

Bill O'Brien on PSU news: "Penn State is a fantastic place. … Very happy for Penn State, mostly for the players and the coaching staff."

Thank you to everyone who supported us when few did… we came here for you guys! It's a great day to be a Penn Stater. #WEARE

All we needed was shot and we go it. #WEARE #BeatRutgers

Thank my Lord Jesus Christ my family and all the PENN STATE fans who supported us!!! #Appreciated

During this bowl ban we weren't playing for wins, championships, or bowls but simply for each other and #pennstate. I love me team and psu!

Now just give us our wins back @NCAA #409Forever

Finally a correction. NCAA was wrong about the Penn State football culture and had no business handing down sanctions. Was not their case.

Good news for Penn State football. A turn in the right direction.

The $60 million fine and vacation of wins from 1998-2011 will remain in effect for Penn State, according to the Big Ten.

Bowl game will be a nice reward for PSU – but schollies are the key. Was obvious in our last 2 visits how damaging low #'s have been.

Very happy for @coachjfranklin and everyone to get post season back. The B1G is there for the taking…

Big Ten and NCAA do the right thing in ending Penn State sanctions — finally. I say get Sandusky and enablers, not 19 year old players.

Good. NCAA should have never punished Penn State players in the first place. It was a criminal matter. Courts are handling.

#PennState just became a MAJOR player in #BigTen immediately with end of all sanctions.

I would genuinely be interested to see a video of the #PennState team reaction to learning the news about this NCAA decision.

So Penn State with a full scholarship limit, postseason eligibility, a QB who can't go pro until 2016 and James Franklin is pretty scary.