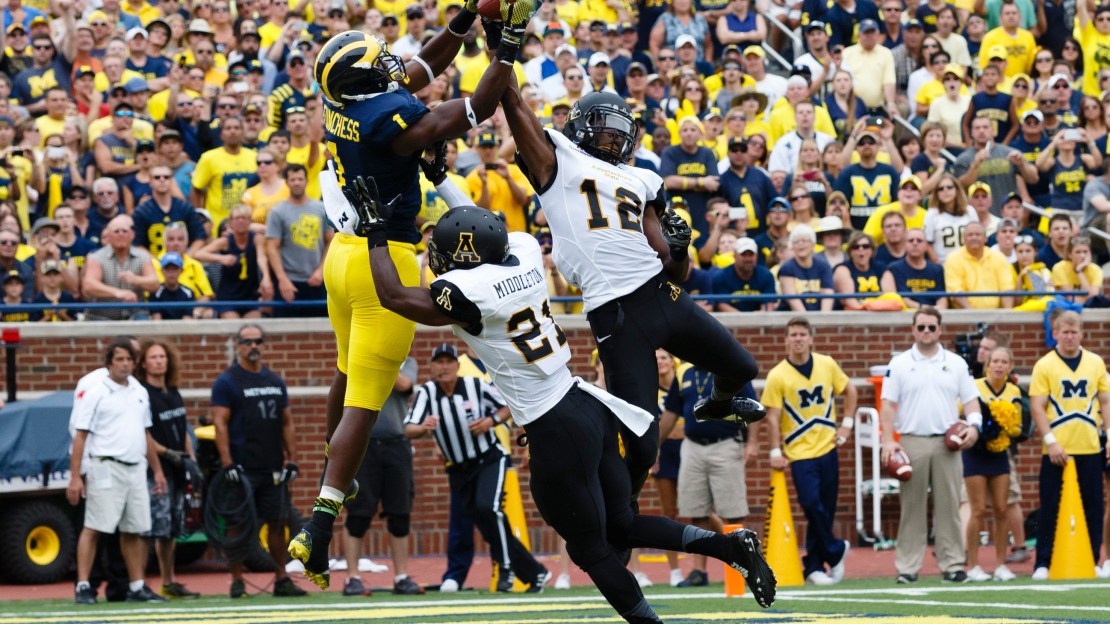 Anyone who saw Devin Funchess play on Saturday had to be wowed with his seven catches for 95 yards and three scores. Yes, it was just App State. But the 6-5, 230-pound Funchess was a man among boys. Michigan QB Devin Gardner was impressed to the point where he thinks Funchess may be the best wideout ever to play for Michigan. I?m not gonna disagree. He looks like he?s poised for a huge season.

Don?t look now, but there?s a chance that Rutgers could start 5-0. Really.

After opening with a win vs. Washington State, the Scarlet Knights play host to FCS Howard and Penn State, go to Navy and welcome Tulane. So, Rutgers, you see? It?s true: RU could be 5-0 when Michigan comes to Piscataway. How cool would that be?

Michigan State continues prep for its trip to Oregon. Playing up-tempo Jacksonville State in the opener was a good start and nice prep for what the Spartans will see in Eugene.

Here are some interesting numbers leading up to the big matchup.

Oregon notched 673 yards in its opener. That has to make your eyes pop out. Yep, it?s gonna be fun to see that Duck offense clash with the Michigan State defense. Immovable force, meet irresistible object.

Penn State was impressive in its opener. Now comes a tilt vs. Akron, coached by Terry Bowden. Yes, THAT Terry Bowden. The work of Nittany Lions o-line was impressive vs. a veteran UCF d-line. And how about the receivers, especially DaeSean Hamilton? The true freshman had 11 catches for 165 yards. Geno Lewis had 8 catches for 173 yards as Christian Hackenberg became the first PSU signal-caller ever to throw for over 400 yards.

Could we see two PSU wideouts eclipse the 1,000-yard mark? The school has had just two all-time (Allen Robinson and Bobby Engram).

You want playmakers? Nebraska is loaded with them on offense.

Because of it, this could be one of the Big Ten?s better attacks under coordinator Tim Beck. But there is a bit of worry about end Randy Gregory, who is doubtful for this week?s game with a knee injury suffered in Week One. No worries. He won?t be needed vs. FCS McNeese State. Save the big fella for the important games.

Speaking of which, how good are upcoming Nebraska foes Fresno State and Miami (Fla.)? Each got waxed in their opener. The Huskers then play host to Illinois, so they could be 5-0 when they go to Michigan State on Oct. 4.

Look, we all know Iowa wasn?t impressive in its opener vs. pesky FCS Northern Iowa. That means the Hawkeyes need to turn heads and look good vs. Ball State this week.

?Clearly we need to make strides, and that?s part of the deal,? Kirk Ferentz said. ?That?s what the challenge for the whole season is. We need a good week of practice, certainly, and we?ll be playing a tough opponent again.?

And the linebackers need to play better. To that end, there has been some solidifying of the depth chart. These guys will be OK. I love Bo Bower. Kid is all heart and guts and effort.

Anyone who saw Wisconsin?s loss to LSU knows the Badgers? passing game needs to improve. But, there will be no change at quarterback: Tanner McEvoy will remain No. 1.

I guess it would have been a surprise is the staff had made a switch and gone with Joel Stave. Here is hoping McEvoy dominates and passes well vs. FCS Western Illinois this week. But it sounds like Stave will be in the mix.