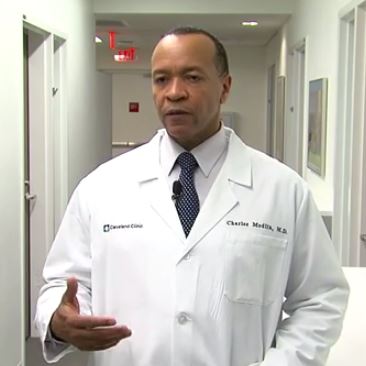 Dr. Charles Modlin, a Cleveland Clinic urologist and one of just 17 black transplant surgeons in the United States, has spent the past 18 years working to eliminate health care disparities in minority populations. This impressive career, both in and out of the operating room, began with a choice that came long before college: music or medicine.

?I really enjoyed studying science, but I also enjoyed playing the trumpet,? Modlin said. While he had considered becoming a physician at a young age, it was in high school, when he helped care for his grandmother, that his decision was made. ?My mother moved my grandmother, who was in her 80s, into our house for a while, and I helped take care of her. Later on, we had to put her into a nursing home. My mom would go visit her every day and take us with. I'd help take care of her, get her water, take her to get lunch.?

That inherent compassion, coupled with the support of his tight-knit central Indiana community, are what Modlin credits with steering him into medicine. Later, during his surgical residency in medical school at Northwestern University - where Modlin also completed his undergraduate degree - he choose to specialize in urology.

?I?m grateful that Northwestern gave me a strong educational foundation, a well-rounded experience. I did many of my clinical rotations at Evanston Hospital, and was fortunate enough to rotate through the VA as well. Also, there was a program run by the students where we went to Cabrini-Green and interacted with a lot of the youth from that area of Chicago. I think that gave me the opportunity to learn about the community outreach that I do now.?

Medical training, particularly surgical subspecialty training like Modlin?s choice of kidney transplantation, is lengthy - 17 years from undergraduate to fellowship - and comes with a grueling schedule. It wasn?t until Modlin was on staff at the Cleveland Clinic in 1996 that he was able to take a broader view of the overall medical landscape.

?It was then that I could really develop an appreciation for how certain populations fared differently. I read a report in the late ?90s, the ?Healthy People 2000? report that came from the U.S. Department of Health and Human Services. It really emphasized the impact that health care disparities have, especially on African American and other minority populations. In that report, they challenged health care institutions, individual physicians and health care providers to play a role in terms of eliminating those disparities.?

Modlin approached the Cleveland Clinic?s chief of staff and proposed developing a formalized program to address health care gaps of minorities. ?We called in some community leaders, as well as Congressman Louis Stokes and Congresswoman Stephanie Tubbs Jones [both from Cleveland].? Once the program had support, Modlin realized it would be to everyone?s benefit to start with what he knew best: urology.

Rather than open up the Minority Men?s Health Center and expect people to come, Modlin went out and engaged with the community. ?We joined community organizations and went to churches. [Patients] had to know that we were out there for their best interest.?

And progress has been made. ?We?ve created a very innovative Center,? Modlin said. ?A lot of the individuals who come to the Minority Men?s Health Center or Health Fair have indicated were it not for this particular type of venue, this dedicated center for them, they never would have come in to undergo evaluations. And through those evaluations, we have discovered a number of conditions. We've found a lot of cases of prostate cancer, a 30 percent incidence of hypertension, diabetes, hepatitis C, HIV, stress, depression, mental health issues-a number of conditions where the patients did not know they were preexisting.?

The Minority Men?s Health Center and its mission continue to grow. Name notwithstanding, it also helps women navigate the health care system and encourages them to undergo preventative health screenings. Modlin?s work planted the seed for his dermatology colleagues to start the Multicultural Hair and Skin Center, and he has been in touch with leaders in orthopedics, cardiovascular medicine, and sickle-cell disease research. ?I'm trying to broaden our health care disparity objectives and initiatives so that we are not just doing what we're doing in urology - we are doing it across the board at Cleveland Clinic.?

While his career is thriving in Ohio and he is passionate about his work, Modlin said, ?I?ll always be a Northwestern guy.? He?s served two terms on Northwestern?s Feinberg School of Medicine Alumni Board, and he?s considering more formal service to the school. Additionally, his medical school graduating class is working to endow a scholarship in medicine, and Modlin is excited about them closing in on their goal of raising $100,000. He also helped establish an alumni lecture series for medical students, for which Northwestern graduates not only return to speak on various topics, but also interact with and mentor students. (Modlin was the first to participate.)

?Northwestern really provides a unique opportunity,? he said. ?Just walking up and down Sheridan Road there, you look out over Lake Michigan and the Chicago skyline. It?s inspiring! I will always be committed to Northwestern. I will always try to give back to the university in several ways. In everything I do, I am proud to let people know that I?m a Northwestern alumnus.?