We asked fun questions, and we got fun answers 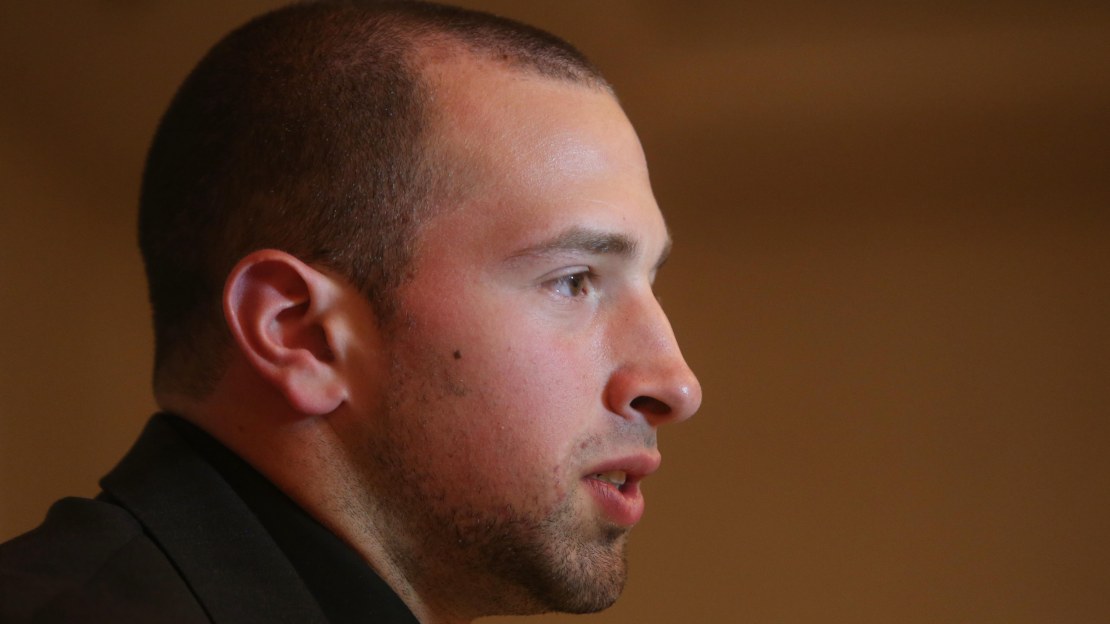 Big Ten Media Days came to a close Tuesday, as the second and final day of the event was filled with plenty of juicy material. Players and coaches filled the Downtown Chicago Hilton Hotel while fielding questions from media members in a roundtable format.

In order to not repeat some of the often-asked questions throughout Media Day, I made it a point to go around and ask players some out-of-the-norm questions, and I certainly got my fair share of great answers.

Here is a look at some of my questions and how current Big Ten players responded to them.

1. You're an NFL GM and can pick any current Big Ten player to start a team – who are you taking?

"I would probably pick Randy Gregory. He looks like he really works hard, and I would need a defensive lineman who can get the job done. I'm not worried about skill guys right now. I need someone on the d-line or o-line." – Purdue RB Raheem Mostert

"That's a great question. I've recently watched Brandon Scherff power clean a whole lot of weight. Immediately after that, I started watching some of their football games, and I saw him put down a lot of linebackers, so I'm going with him." – Illinois TE Jon Davis

"I would take Stefon Diggs. I don't think there's a college football player like him in the league right now. In fact, I don't think there has been one since maybe Percy Harvin. The dynamic he brings to the game, the allusiveness and the knowledge to the game is second to none. I think that would be a good fit for a lot of teams." – Maryland QB C.J. Brown

"I'm picking Brandon Scherff in a heartbeat. It all starts with the offensive line, and just knowing him personally, he's a humble, hard-working guy. Nothing goes to his head whatsoever. That's really what you want. He's striving to be a great player and there's no reason to think he won't be as great of a player in the NFL as he is in college." – Iowa RB Mark Weisman

"I would take Ameer Abdullah. That took me way too long to think about. He's the best player in the Big Ten. That's going to be a locker room statement. There's not too many guys who are like Ameer Abdullah in this conference. There's great players everywhere, but you talk about a guy who brings it every single play, every single down, Ameer is that guy." – Nebraska WR Kenny Bell

"The best guy to follow on Purdue is Ryan Russell. He brings a lot of words of enlightenment to the table. He tweets a lot. He really makes you have a positive attitude about life, and about the game, and about football." – Purdue RB Raheem Mostert

"He doesn't play on the team anymore, but I'd say the best to follow is Beau Allen. He had a pretty good Twitter going on. I'm sure once he gets more comfortable down in Philadelphia, he'll also have a pretty good Twitter. Beau is such an outgoing guy. It's just a real treat that you can hear some of his inner thoughts come out on Twitter. – Wisconsin OT Rob Havenstein

"It would have to be Mike Sadler. He's a super funny guy, and he's extremely smart. The stuff that goes on in his head… I really don't know how that all goes about. He's really sarcastic, and just a good guy. He's really funny and creative on Twitter. He has kind of a smart aleck mentality. I think it's been fun joining him and just the Twitter activities. – Michigan State QB Connor Cook

3. What is the most bizarre question you have been asked today?

4. What is your favorite campus to visit, and why?

"I would say Ohio State. That was pretty cool last year to play in the Horseshoe in front of 100,000-plus people. It kind of stinks that I'll never get to play there again. It kind of sticks I never got to play in Penn State or Wisconsin." – Iowa RB Mark Weisman

"We've been to a lot of great places. My freshman year we went to USC, which was great, but I'm going with the Big House. 100,000-plus screaming. I like that atmosphere. I love those big crowds." – Minnesota RB David Cobb

5. Who would win an arm wrestling competition on your team?

"It's Kyle Costigan. He's the toughest man in the world. It's a Ripley's Believe It or Not fact: He wakes up and eats bowls of nails for breakfast. I don't think he actually knows what the word pain means. He's a heck of a guy and he's a heck of an athlete. He's a machine. He's a freak. You can go on with all of these analogies, but when it comes down to it, the man is just purely tough. He's just real tough." – Wisconsin OT Rob Havenstein

"I would probably give that to Betim Bujari. He's the strongest man in the business. That's all man right there. He's 100 percent man." – Rutgers DE Darius Hamilton

6. What is the best thing you have done this summer?

"I'm interning down in Baltimore with Under Armour. I'm doing supply chain operation. There hasn't been too much free time, but it's great." – Maryland QB C.J. Brown

"We had a giant pig roast at my house, which was awesome. It's a pretty long process if you do it yourself, so we got it catered. We had the entire team over, so it was a good time." – Northwestern QB Trevor Siemian

"One Wednesday morning we had a 5:45 a.m. team run. They had us get dressed and everything, guys had their cleats on. We go to our stretch lines to warm up. It was kind of weird because all the coaches still had their coffee in their hand and normally they don't have their coffee when you go on a team run, which I thought was kind of weird. Then the coaches told us that we were all going to Zoombezi Bay and spent a day at the water park. And then Coach Meyer had all 110 or 115 of us over to his house for a team cookout. That was a blast." – Ohio State TE Jeff Heuerman