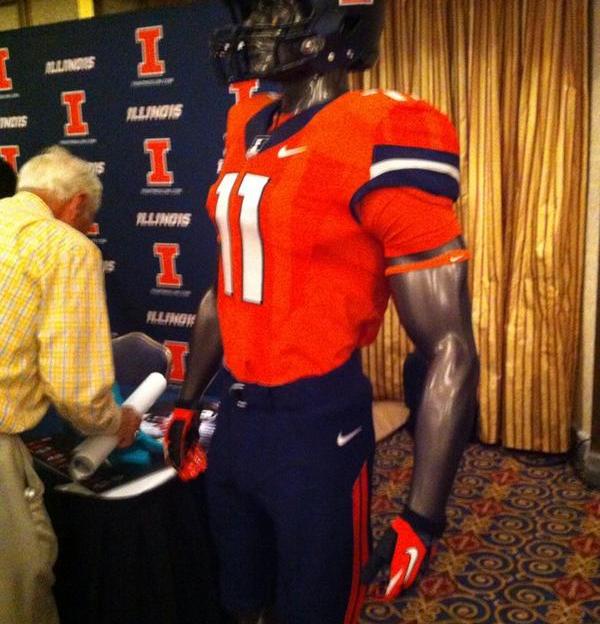 Another Big Ten media days is in the books, and that means it's time to take an early look at the new designs Big Ten football teams will wear in 2014. As of right now, other than Illinois, it doesn't look like there will be a lot of new looks. But that can change in-season, because teams like to keep these things under wraps and Adidas, Nike and Under Armour can always decide to add a new wrinkle. See some of the new designs in this post.

The Illini, of course, unveiled new threads in mid-April, and they are the lone Big Ten team to feature a complete 2014 redesign. Illinois' new collection includes three helmets, including the matte white one below.

A look at one of @IlliniFootball's new helmets. Like? pic.twitter.com/sVkpoep7OS

#Illini autograph table at #B1Gmediaday is flanked by security. pic.twitter.com/zBGGMfN9e8

The Hoosiers underwent a massive (helmet) redesign last season, but a team spokesman said he doesn't expect any new looks in 2014. Yes, the chrome candy stripe helmet is back for another season.

See you soon, Chicago. Follow along with us Monday & Tuesday: http://t.co/CeKGZ92jQu | #IUFB | pic.twitter.com/8NmKCSOcDg

The Hawkeyes, according to a team spokesperson, aren't expected to mix things up this season. Iowa didn't have any new designs last year, either, after wearing two alternates in 2012 (here and here).

The Terps have no shortage of combinations, however a team spokesman said that he doesn't expect many new designs in Maryland's first Big Ten season. The team, along with Under Armour, does plan to unveil one new uniform for a game to be announced.

The Wolverines are not expected to introduce any new designs, although a team spokesperson said to "stay tuned." We do know that Devin Gardner (No. 98), Desmond Morgan (48) and Jake Ryan (47) will continue to wear Legends jerseys. There's also a high-profile number change, as Blake Countess will change to No. 2, Charles Woodson's number.

Other than Illinois' new redesign, the Spartans move to an all-white road jersey might be the biggest change fans see across the Big Ten. Previously, the Spartans road jersey had a green stripe across the shoulders. As for the the chrome helmet for a third straight season, a team spokesman said, "You never know." The all-green design the Spartans wore in the Big Ten title game and Rose Bowl Game is back.

Despite Minnesota's nod to the past during the Big Ten Kickoff Luncheon on Tuesday, a Gophers' spokesperson warned not to expect any throwbacks or new designs. He did say, "Coach Kill always has something up his sleeve." He also said there are no plans to wear the white helmet from the Texas Bowl.

Which will you choose? #Gophers 2-Packs go on sale June 17th. Scope out the lineup now: http://t.co/JfRWYG1K43 pic.twitter.com/hAVCx2h8FV

The Huskers, as they have the last two seasons (2012, 2013), will wear an alternate uniform, most likely in the Big Ten opener vs. Illinois. At least, that's what Bo Pelini said Tuesday. Other than that, a team spokesman says Nebraska doesn't expect any other new designs.

pssst… There are less than 50 days until #Huskers football. 49 to be exact. 7 weeks. #GBR pic.twitter.com/yv3k1q7SYb

The Wildcats enter Year 3 of their "Northwestern Stripe" Under Armour uniforms. A season ago, they broke out a slick all-white combination and a polarizing patriotic design. A team spokesman, however, said, "There's nothing new today, but there could be something." Either way, the Wildcats have plenty of combinations, with three jerseys and pants (white, purple, black) and, at least, four helmets.

The Buckeyes, whether it be the Nike Pro Combat or Rivalry (home and away) series, have been fans of alternate uniforms in recent years. Expect that trend to continue, as a team spokesman said "Coach is a big fan of those." But, for the most part, the Buckeyes will be in their primary Scarlet and Gray.

The Nittany Lions, as of today, don't expect to alter their iconic uniforms. There was buzz about player numbers returning to the helmet, but it turned out to be false. What about the nameplates that former coach Bill O'Brien added in 2012? A team spokesman said Franklin will address any changes before the season. So, there's that.

The Boilermakers, as previously reported, will wear a fan-centric helmet Sept. 27 vs. Iowa for its "Social Media Game." A team spokesman also said the matte black helmet, which debuted last season, will be used for "at least one game."

Hey @LifeAtPurdue.. buy a VIP card by 6/10 and get a photo of yourself on the @BoilerFootball helmet next season! pic.twitter.com/LFjz0y5gCt

The Scarlet Knights, who received new Nike uniforms prior to the 2012 season, aren't expected to add any new designs to their monochromatic collection. The team has announced it will go all-black for its annual "Black Out Game" on Oct. 4 vs. Michigan. See every uniform Rutgers wore in 2013.

The Badgers debuted a red helmet, both with a black and white facemask, last year, and it will be in play again. Speaking of black, Wisconsin seems to be adopting the color, as it will also have black cleats and black undershirts in the rotation. An all-red combo also could be a possibility (see below). A Wisconsin spokesperson estimated the Badgers have "over 80" combinations, after the helmets, facemasks, jerseys and pants are accounted for.