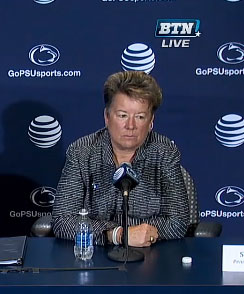 Until earlier this month, Barbour served since 2004 as athletic director at the University of California, where the Golden Bears produced 19 national team titles and built a state-of-the-art athletic performance center. She was at the athletics helm at Cal for nearly a decade, and was one of the longest-tenured athletic directors in the Pac-12. Barbour replaces Dave Joyner, who announced in mid-June his intention to retire on Aug. 1. Joyner has offered to assist with the transition beyond that date.

"In Sandy, I believe we have found a proven leader who is well-suited to provide strong oversight for our 31 varsity sports, our 800-plus student athletes, and the $115 million budget of Intercollegiate Athletics," Barron said. "I was impressed by her hands-on approach to things, her strategic thinking and her ability to combine sports, business and education in an effective and accountable way."

The reported hiring of Sandy Barbour as Penn State A.D. gives the #B1G two female ADs. Rutgers' Julie Hermann is the other.