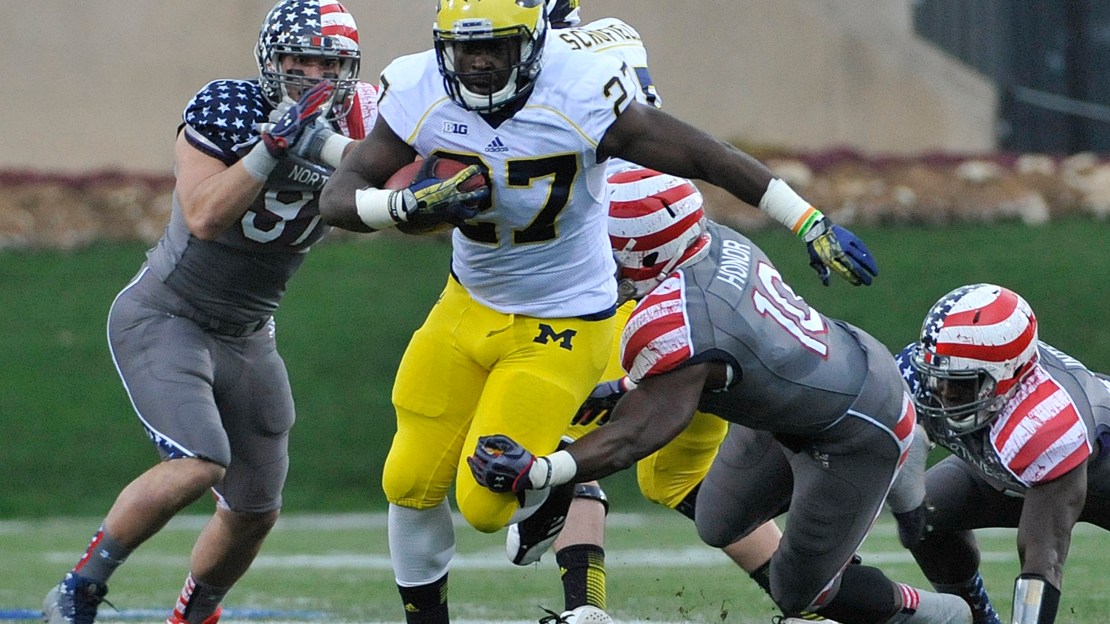 Where have all the 1,000-yard rushers gone in Ann Arbor? Really. It?s a crisis of sorts. Is there one on this year?s roster? The competition at running back figures to be strong between De?Veon Smith and Derrick Green.

Even without Darqueze Dennard, the Michigan State secondary figures to be formidable again.

Guys like Trae Waynes and Kurtis Drummond will maintain the ?No Fly Zone? moniker this unit has developed in recent years.

If you didn?t see the ESPN ?My Wish? piece on Stephen Loszewski and the Michigan football program, you need to.

An 18-year-old from Grain Valley, Mo., Loszewski spent three and a half years fighting acute lymphoblastic leukemia (ALL), and in June he was able to go through an experience he had hoped to have before it was taken away by his disease. Loszewski — who is now in remission — made the trip to Ann Arbor with his family on June 24 and went through a mock recruiting visit. Pretty cool.

Nice feature here on Ohio State?s Thad Matta and the drive that helped push him to become one of the top coaches in the Big Ten.

Pennlive.com has a look at which assistant coaches from Joe Paterno's 2011 staff are still in college football. Interesting stuff.

One of those former assistants, Jay Paterno, has filed a lawsuit against the school.

Jay Paterno has claimed that his reputation took major collateral damage from the Freeh Report which concluded - unfairly in the minds of many Paterno loyalists and Penn State fans - that the university's senior leaders failed to move aggressively to stop Sandusky when they had clear chances to do so, in part, to avoid bad publicity for a pristine football program.

If you know of a good big man, let Miles know.

?I?m excited,? he told Omaha.com. ?Our recruiting depth chart is pretty solid. At the same time, we need ?bigs.? Every time you turn around, it?s another high-major school that you are recruiting against if you want someone you think can make an impact.

?Hopefully we?ll get some fall commitments and go from there.?

Speaking of recruiting ? exciting times in Evanston for Northwestern hoops, what with some of the players Chris Collins is bringing in. Vic Law looks like the unquestioned stud of a five-man incoming class that may be the best in school annals. But who else could play this winter? Keep an eye on Indiana product Bryant McIntosh, a combo guard.

Will Minnesota still play in the preseason NIT? Stay tuned.

The Star-Tribune says that the NIT was only able to secure half as many teams - eight, instead of 16 - for this November?s tournament, leaving some programs involved in a state of uncertainty. Minnesota, named one of the tournament?s four host schools, could be one of them. Gophers coach Richard Pitino has made it clear he wants his team to remain in the field. But on Monday, he wouldn?t unequivocally commit to the tournament with so much up in the air.

Chuck Long and Phil Steele both think Iowa has good lines on both sides of the ball. Good! We are in agreement. I knew I liked these guys.