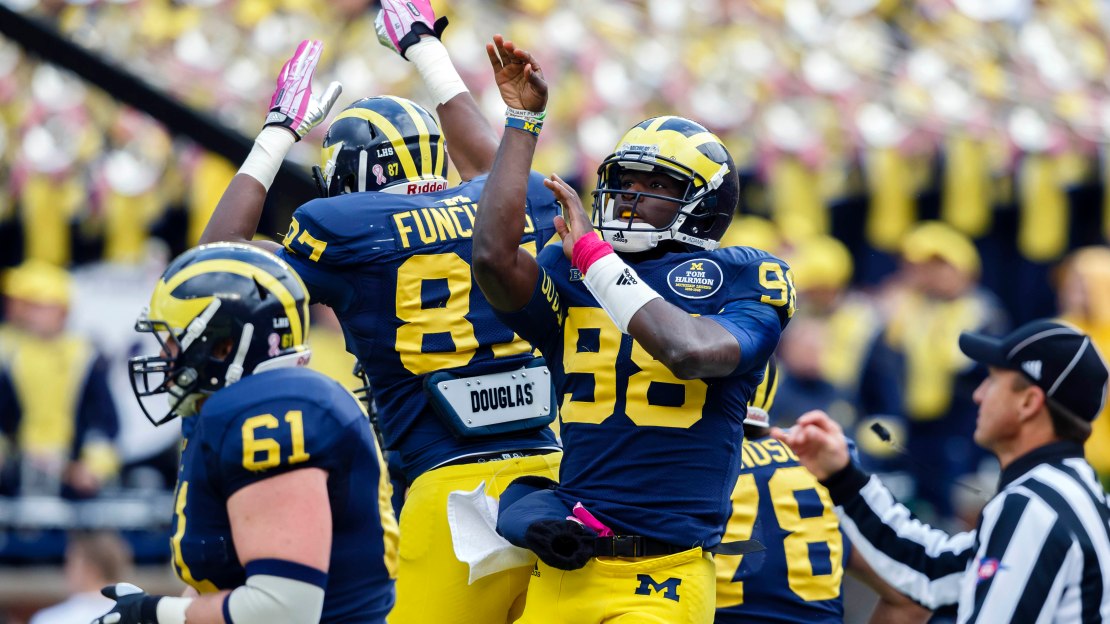 The Big Ten is set to return a ton of talent at quarterback, but the same can't be said at wide receiver. With names like Jared Abbrederis, Corey Brown, Quincy Enunwa, Jeremy Gallon, Cody Latimer and Allen Robinson all off to the NFL, there will be plenty of new names atop the receiving leader list.

This got me thinking about the top quarterback-receiver duos in the Big Ten.

* I made it a point to not list the same quarterback more than once.

1. Braxton Miller and Devin Smith, Ohio State. It's no secret that Miller is the top returning signal-caller in the Big Ten and an early Heisman Trophy favorite. With Corey "Philly" Brown moving on to the NFL, look for Smith to take over the No. 1 wideout spot in Columbus. The senior-to-be hauled in 44 catches for 660 yards and eighth touchdowns last season, all of which ranked second on the team behind Brown. The Buckeyes will be working in a new starting tailback this season, which means that Miller will rely on his returning pass-catchers early and often. Don't be surprised if Smith tops the 70-catch, 1,000-yard mark in 2014. This duo has the chance to be very special.

2. Devin Gardner and Devin Funchess, Michigan. The Devin-to-Devin connection put up some huge numbers last season and should only improve. Gone is Jeremy Gallon, which means that Funchess' role in the offense will continue to grow. Gardner threw 10 interceptions in the Wolverines' first six games of the 2013 season, and then had just one pick in the final six games. If he can continue that trend, and get the ball in Funchess' hands, this combo could be one of the better QB-WR duos in college football.

3. Nate Sudfeld and Shane Wynn, Indiana: My colleague, Brent Yarina, made the prediction that Wynn will be the top wideout in the Big Ten this season. After hauling in 114 catches for 1,293 yards and 17 touchdowns over the past two seasons, all while competing with Cody Latimer, Kofi Hughes and Ted Bolser for looks, it's tough to argue against that. Having returning starter Nate Sudfeld throwing passes his way will only help his cause. Sudfeld was outstanding last season, completing better than 60 percent of his passes for 2,523 yards and 21 touchdowns, while splitting snaps with Tre Roberson. Now that Roberson has transferred to Illinois State, this is Sudfeld's offense, and he has one exceptional target in Wynn.

4. C.J. Brown and Stefon Diggs, Maryland. Earlier this summer, I picked Maryland's Stefon Diggs to be the Big Ten's top receiver. This is a guy who has elite-level speed and can change a game any time the ball is in his hands. Diggs hauled in 54 catches for 848 yards and six touchdowns during his freshman year, and then followed that up with 34 catches for 587 yards in his sophomore year, despite missing nearly half the season with a leg injury. Brown has plenty of weapons surrounding him in this Maryland offense, led by Diggs. Now it is up to him to make sure he gets No. 1 the ball.

5. Connor Cook and Tony Lippett, Michigan State. Was there anyone in the Big Ten who improved more from the start of last season to the finish than Michigan State's Connor Cook? Part of the reason for Cook's improvement was the play of the Spartans' wide receivers, especially Tony Lippett. The 6-3, 200 pound wideout hauled in a team-best 44 catches in 2013, 32 of which came in the second half of the season. With every skill position player returning in 2014, outside of Bennie Fowler, this Spartan offense has the chance to be explosive, and it starts with Cook and Lippett.

6. Christian Hackenberg and Geno Lewis, Penn State. How will the Nittany Lions go about replacing Allen Robinson? That's the No. 1 question facing this Penn State offense heading into the season. It won't be easy, but junior Geno Lewis looks to be the early favorite to do so. He had just 18 catches for 234 yards last season, but he should be the top receiver option in State College this year. On the flip side, Hackenberg is a known commodity after enjoying a standout freshman season. Don't be shocked if this duo combines for 50-plus catches and 800-plus yards in 2014.

7. Tommy Armstrong Jr. and Kenny Bell, Nebraska. This Nebraska offense is loaded from top to bottom with playmaking ability, and Kenny Bell is the leader of the wide receiver group. He?s a reliable target with speed who will leave campus as one of the Huskers? best receivers. Tommy Armstrong Jr. will be throwing the ball Bell's way in 2014, which was the case for the majority of last season, after the injury to starter Taylor Martinez. This is a team that will rely heavily on a dominant running game, but when they do pass, they know they have one of the best in the Big Ten in Bell.

8. Trevor Siemian and Christian Jones, Northwestern. It was a tough choice between Christian and Tony Jones, as both should be outstanding targets for Northwestern QB Trevor Siemian. Christian Jones caught 54 passes for 668 yards and four touchdowns last season. Now, he has a pass-first quarterback under center at all times in Siemian, which should only help those numbers increase. With Siemian taking over the full-time starting role, and running back Venric Mark back healthy, this Wildcat offense has the chance to be exceptional.

9. Jake Rudock and Kevonte Martin-Manley, Iowa. Traditionally known as a run-first offense, is this the year when we see Iowa finally begin to stretch the field with its downfield passing game? With Jake Rudock under center and Kevonte Martin-Manley flanked out wide, the Hawkeyes have the talent to do so. In fact, Martin-Manley is one of the fastest players in the conference, regardless of position. If you combine his speed with Rudock's accuracy (60 percent completion percentage), this could be a formidable duo.

10. Gary Nova and Leonte Carroo, Rutgers. This should be an adjustment year for Rutgers as the program makes the move into the Big Ten. But one thing is for sure: this group has a go-to wideout in Leonte Carroo, who, despite missing four games in 2013, grabbed 28 passes for 478 yards and a team-best nine touchdowns. Don't be surprised if those catches and yards double in 2014.