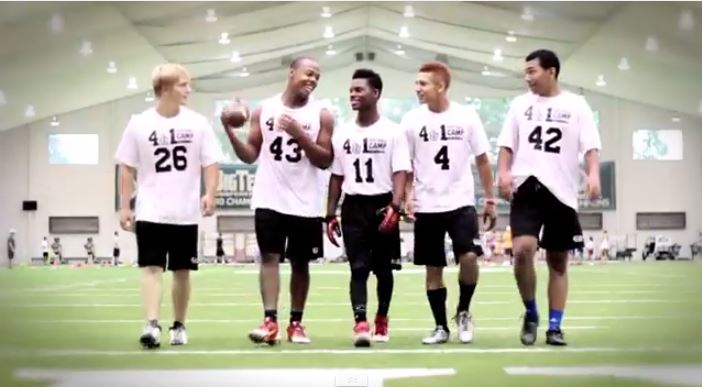 Miami Dolphins Director of Player Development Kaleb Thornhill enjoys mentoring kids. So when he found out about the non-profit youth football and academic camp 4th and 1 and its mission to help student-athletes from disadvantaged backgrounds go to college, he knew he needed to bring it to his alma mater, Michigan State University, in his hometown, East Lansing, Mich.

The partnership between MSU and 4th and 1 that Thornhill helped form has changed lives, not just of the kids who attend the camp, but of the adults who mentor them. ?When I get back to my regular job, I feel fulfilled-really, it provides mentoring year-round,? he said. ?This week has transformed my life.?

It was also important to him to bring 4th and 1 to East Lansing, where he grew up. ?Since I went there, I wanted to give back to my community, to use their facilities that meant so much to me,? Thornhill explained. ?This partnership lets us bring Lansing kids who may never set foot on a college campus to MSU to show them what it would be like to go to college.?

Students who attend 4th and 1, which is free, stay in the MSU dorms and use the university?s facilities. While there, they spend the week in intensive football training and ACT/SAT prep. They also attend classes taught by business leaders and university staff from across the country on topics ranging from résumé writing to sports broadcasting. They even get to try yoga and meditation.

The program has produced gains in aptitude-test results: Participants? ACT scores are recorded at both arrival and completion of 4th and 1, and go up by an average of three points at the end of the camp. SAT scores improve by an average of 64 points.

Beyond increases in test scores, participants come away with a new understanding of what they can do with their lives, and they often spend more than one summer in the program.

Take Quincy Briggs. When he came to his first 4th and 1 camp, which was the first time the program was held at MSU, he scored a 19 on his first practice test. By the end of his senior year, after three summers of 4th and 1 tutoring and lots of hard work, he earned a 27, which was even higher than the score he needed for his academic scholarship at Central Michigan University. He?s now looking forward to his second year at that school, and he?s spending this summer as a volunteer at MSU?s 4th and 1 camp.

Without the help of his mentors in the program, Briggs knows he would have taken a different path. One of the reasons he volunteered this summer was ?to show them I?m an example. I?ve been through this program. This program works. These leaders know what they?re talking about. If I hadn?t gone through ? my scores wouldn?t have gone up as high ? they just really helped me break each step down, [to know] what patterns to look for.

?The first time I took the practice test, I was really nervous. English, math, limited time, 50 problems, 50 minutes! I was freaking out before I even took it. They helped me just to calm down and take the test. They helped me to manage my time in life, not just on the test, and to balance sports and academics.?

Cameron Lee, another 4th and 1 alum, found success from the athletic mentoring as well. Because of the relationships he developed with coaches at the camp, he was able to try out different football positions than the ones he?d been playing in high school. They taught him skills and techniques that led to a scholarship and a college football career.

Lee spoke fondly of his mentors-and his football mentor, in particular. ?One coach from my
school, Don Dimick, was the lineman coach,? he said. ?He?s another guy who I still keep in touch with. He helped me with my college application to play football, got my name out, so I was scouted by three different schools and three different positions. He helped arrange that for me. I?ll never be able to say thank you to him enough for what he did for me.

?It?s a good and powerful camp. It can only help you with your future endeavors and your own personality and mindset. You realize you?re not the only one - you don?t have it that bad, you could always have it worse. And there?s always something you can do to help. I?m going to try to come back as much as possible to help out.?