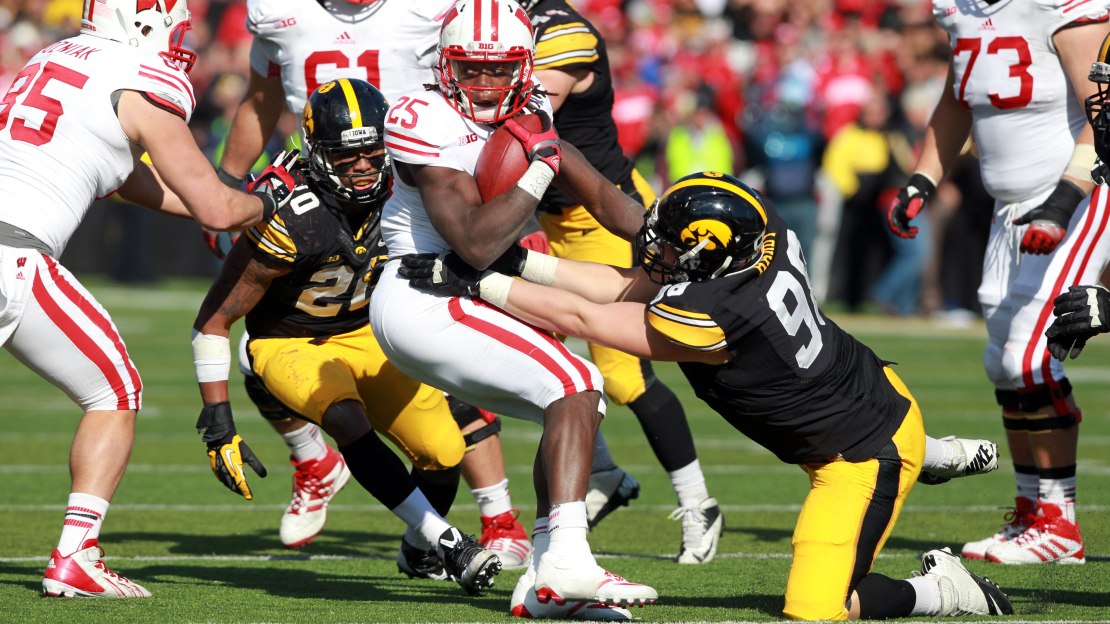 The penultimate Saturday brings us seven Big Ten games for the first time in 2014. The Big Ten West must be watched, as Minnesota plays at Nebraska and Wisconsin travels to Iowa in two division-defining games. Here?s a breakdown of the best of Week 13.

Interesting factoid: Since carding back-to-back wins over Ohio State in 1987 and 1988, Indiana is 0-20-1 in the series, with the tie coming in 1990. So, yeah, it's been a while since the Hoosiers were competitive against one of the Big Ten's perennial powers.

Game of the week: Wisconsin at Iowa. This one could go a long way in deciding the West Division, and there are few series closer than this one (Badgers lead 43-42-2). The Badgers have been a Big Ten bad boy in recent years. To be the best, you have to beat the program that has been the best. Gary Andersen?s second team may be vulnerable, with some big issues along the front seven on defense. And who will catch passes? Is Joel Stave really the answer at quarterback? Iowa needs to show Wisconsin who is boss if it wants to win the West.

Top quarterback matchup: Penn State's Christian Hackenberg vs. Illinois' Wes Lunt. These could be the top two passing quarterbacks in the Big Ten. In fact, this could be a clash between future first-round draft choices. Hackenberg enjoyed a strong debut last season, while Lunt is an Oklahoma State transfer who showed a big arm in his stint in Stillwater before sitting out last season.

Best coordinator battle: Wisconsin offensive coordinator Andy Ludwig vs. Iowa defensive coordinator Phil Parker. Ludwig is an underrated play-caller who will have his work cut out for him this fall. At least Ludwig will have stud running backs Melvin Gordon and Corey Clement. Parker is a former defensive back who excels in coverages. He?ll push the buttons on a Hawkeye defense that will have one of the conference?s best lines. The rebuilt linebacking corps should be humming along by the time this game kicks off.

Upset alert: Minnesota at Nebraska. The Gophers had lost 16 in a row to Nebraska before beating the Cornhuskers last year, 34-23, in the Twin Cities. Minnesota's last win in Lincoln was in 1960. No doubt, Jerry Kill?s crew doesn?t fear the Huskers. If Minnesota?s offense has developed a solid down-field passing game, the Gophers may be able to dump Nebraska for a second season in a row.

Week 13 nuggets: The Badgers are 3-1 in their last four trips to Kinnick Stadium … Penn State has won the last two meetings vs. Illinois by a combined score of 59-24 … Rutgers is 3-2 all-time vs. Michigan State. All five meetings have been since 1988 … Michigan is 3-0 all-time vs. Maryland, as all three encounters have been since 1985 and have taken place in Ann Arbor.