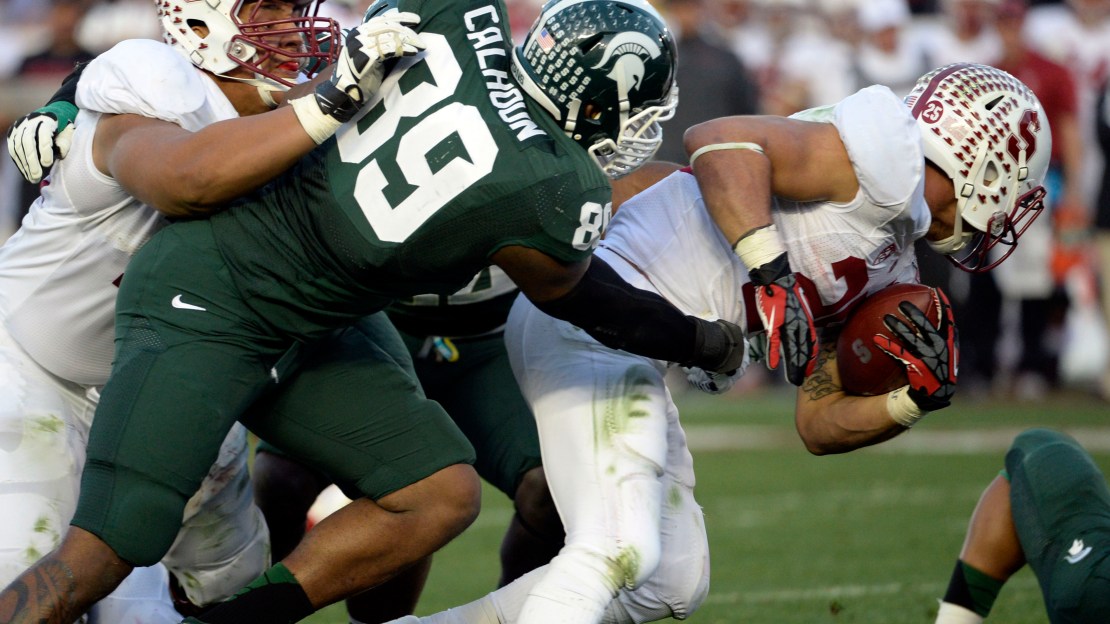 Week 2 brings more juice than the opening salvo to the season, as there are three nationally relevant games: Michigan State at Oregon; Virginia Tech at Ohio State; Michigan at Notre Dame. In fact, those games will offer the Big Ten a golden chance to make a statement. A win by the Spartans on the road in raucous Autzen Stadium would stamp them legit national title contenders. Here?s a look at the best of Week 2.

Best storyline: All eyes will be on Eugene, Ore., where Michigan State will take on Oregon in one of the top non-conference games on the national calendar. The Ducks figure to be a top-five team, while the Spartans should rank in the Top 15 coming off a Rose Bowl championship season and No. 3 final ranking. If Michigan State can return to East Lansing with a win, it could be in line for another special season.

Game of the week: Michigan State at Oregon. There are three very nice games on the docket, with Michigan at Notre Dame, Virginia Tech at Ohio State and Michigan State at Oregon. Have to go with MSU-Oregon, which will be one of the most anticipated non-league games in the nation. Does it get any better than a matchup between the high-flying Duck offense and the steely Spartan defense? Of course not. The schools most recently met in 1998-1999, as each team won on its own turf in battles between Mike Bellotti and Nick Saban.

Top quarterback matchup: Connor Cook vs. Marcus Mariota. It won?t get too much better than Cook vs. Mariota. Cook emerged early last year as the panacea to Michigan State?s quarterback woes, developing into a difference maker who earned MVP honors in the Big Ten title game and Rose Bowl. Mariota is a top contender for the Heisman as one of the premier dual-threat signal-callers in the nation.

Upset alert: Michigan at Notre Dame. Michigan will have a shot to win in South Bend in what should be an emotionally charged game that will be the last meeting (for the time being) in a storied rivalry that?s going the way of Texas-Texas A&M, Kansas-Missouri and Nebraska-Oklahoma. The prime-time clash will be a good litmus test for a Wolverines squad that needs a big win to build confidence coming off a 7-6 season that has stirred grumbles along State Street in Ann Arbor. Michigan has won four of the last five meetings. The lone defeat: In 2012 in South Bend, when Denard Robinson endured his infamous ?turnover game.? You remember the six turnovers in a 13-6 loss, right? Right.

Week 2 nuggets: Every school is playing except Indiana, which is the first Big Ten team to have a bye … Virginia Tech's visit to Ohio State should be great. The Hokies are famous for their strong, aggressive defense, killer special teams and physical offense under iconic head coach Frank Beamer. But they will be breaking in a new quarterback and the o-line needs to develop, as it will face perhaps the top defensive line in the nation vs. the Buckeyes. OSU and Va Tech never have played … This also is ?MAC Week,? as Big Ten teams will play four games vs. their Midwestern little brother: Northern Illinois at Northwestern; Akron at Penn State; Ball State at Iowa; Central Michigan at Purdue … After six games vs. FCS foes in Week 1, there are three games this week: McNeese State at Nebraska; Western Illinois at Wisconsin; Howard at Rutgers. All together now: ugh. It would be a shock if any of those contests are close.