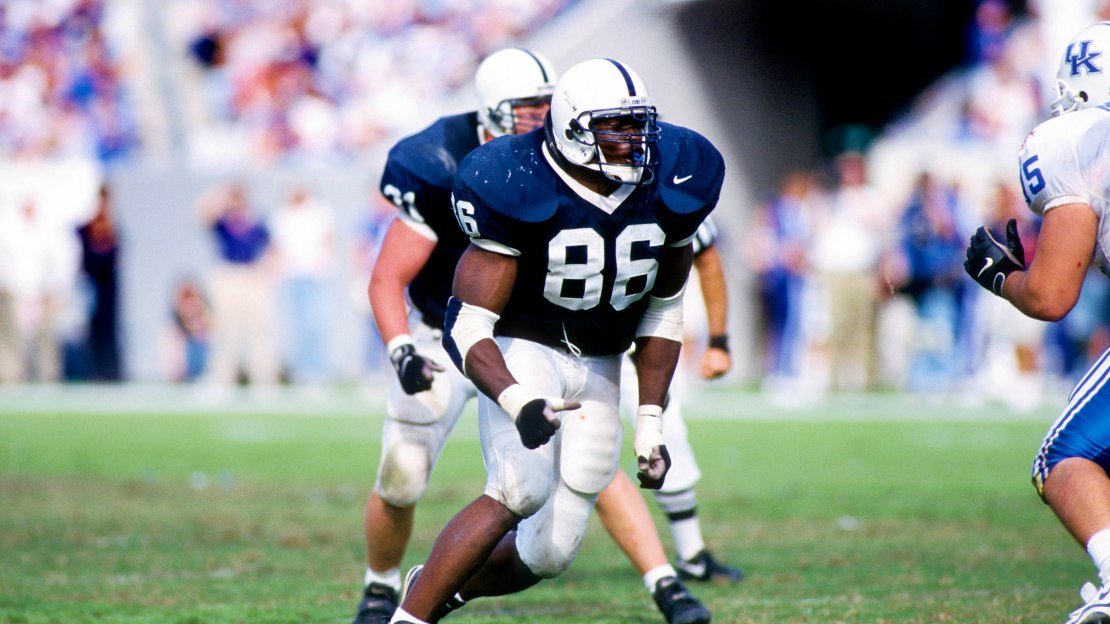 Talent evaluation is a dicey proposition. Even with all of the resources that NFL teams have to learn about college players-the NFL Combine, interviews, on-campus workouts, an army of scouts, reels of video-teams still can mess up a pick or stumble into a pleasant surprise.

The disappointments become glaring when they happen in the first round, the one round of picks where you would think teams could get correct. And years later, the nice surprises almost jump out off the draft board when you see how a college player went on to exceed expectations in the NFL.

Here?s a look at 15 Big Ten surprises and first-round disappointments from over the years. Of course, there are others in both categories – tell me if you have them. Even in retrospect, it's hard to have seen any of these coming.

Minnesota?s Bobby Bell, LB, 7th round, 1963, Chiefs. Bell became an all-time great, helping the Chiefs win Super Bowl IV on the way to a Hall of Fame career. He also helped the Chiefs win two AFL championships as one of the most dynamic playmakers in AFL history.

Michigan?s Tom Brady, QB, 6th round, 2000, Patriots. It?s difficult to think seven quarterbacks were picked before Brady, including such luminaries as Hofstra?s Giovanni Carmazzi and Texas State?s Spergon Wynn. Brady has proven to be one of the ultimate steals in NFL draft history, forging a Hall of Fame career that has produced five Super Bowl appearances and three championships after going 199th overall in the 2000 draft.

Penn State?s NaVorro Bowman, LB, 3rd round, 2010, 49ers. He has been to three Pro Bowls in a row on the way to emerging as one of the NFL?s top linebackers. Bowman is the heart and soul of a rugged San Francisco defense that has been on the precipice of the Super Bowl in recent seasons. Can he overcome a bad knee injury suffered late last season? Don?t bet against it.

Wisconsin?s Owen Daniels, TE, 4th round, 2006, Texans. Daniels has been a consistent force, notching 386 catches for 4,617 yards and 29 touchdowns in his career. Daniels is especially effective on third downs and in the red zone.

Nebraska?s Ahman Green, RB, 3rd round, 1998, Seahawks. Lost behind Ricky Watters in Seattle, Green was dealt to Green Bay where he blossomed. He went on to earn Pro Bowl honors from 2001-04 and was the NFC Player of the Year in 2003. Green also is the all-time leading rusher in Packer annals.

Indiana?s Trent Green, QB, 8th round, 1993, Chargers. Green didn?t become a starter until 1998 with the Redskins after failed stints in San Diego and the Canadian Football League. He went on to enjoy a strong career en route to making two Pro Bowls and leading the AFC in passing in 2004.

Iowa?s Aaron Kampman, LB, 5th round, 2002, Packers. The hard-working Kampman was named All-Pro twice in a career that saw him notch 58 sacks with 483 tackles.

Wisconsin?s Tim Krumrie, DT, 10th round, 1983, Bengals. The ultimate lunch pail guy, Krumrie was a rock in the interior on the Bengals? line in helping Cincinnati to Super Bowl XXIII. Who can forget the gruesome knee injury he suffered in that game? The ultimate tough guy made it back from that to keep on excelling. No one in the NFL history is tougher.

Minnesota?s Karl Mecklenburg, LB, 12th round, 1983, Broncos. Consistently underrated on his own team, Mecklenburg played in six Pro Bowls and helped Denver advance to three Super Bowls. He had 79.5 sacks to rank second in team history.

Nebraska?s Carl Nicks, G, 5th round, 2008, Saints. His draft stock slipped because of some off-field issues. But New Orleans? gamble paid off, as Nicks emerged quickly as a top blocker in making the Pro Bowl in 2010-11 and also won a Super Bowl.

Nebraska?s Cory Schlesinger, FB, 6th round, 1995, Lions. The human battering ram cleared the path for 12 seasons as one of the NFL?s premier fullbacks-all with the Lions. He also ran for 473 yards and caught 197 passes.

Nebraska?s Will Shields, G, 3rd round, 1993, Chiefs. The guy was a stalwart who didn?t miss a game during a 14-year career. And he started all but one game in his illustrious career. He?s destined to be enshrined in Canton at some time.

Northwestern?s Steve Tasker, WR, 9th round, 1982, Oilers. After two years in Houston, Tasker came to prominence with the Bills, where he emerged as the NFL?s premier special teams player and helped Buffalo to four consecutive Super Bowls. The 5-9 Tasker was a hard-hitting ?gunner? on coverage teams and was a seven-time Pro Bowler.

Wisconsin?s Mike Webster, C, 5th round, 1974, Steelers. ?Iron? Mike was enshrined in the Pro Football Hall of Fame in 1997 after an illustrious career anchoring a strong line for four Super Bowl champion teams. The late Webster was named to the NFL?s 75th anniversary all-time team and was a nine-time Pro Bowler. He set the standard at center.

Wisconsin?s Russell Wilson, QB, 3rd round, 2012, Seahawks. He began his career at N.C. State but finished it with the Badgers in spectacular fashion by leading Wisconsin to the Rose Bowl. He has gone on to rise quickly in the NFL, leading Seattle to the Super Bowl title last season.

Penn State?s Courtney Brown, DE, Browns, No. 1 overall, 2000 – Injuries kept Brown from ever coming close to fulfilling the expectations befitting a No. 1 overall selection. Brown played just one full season in five with Cleveland. He was out of the NFL after seven seasons. Brown forever will have a place alongside mega-draft-bust buddies like Ryan Leaf, Kenneth Sims, Tim Couch, Derek Carr and Aundray Bruce.

Penn State?s Ki-Jana Carter, RB, Bengals, No. 1 overall, 1995. The ultimate ?what could have been? story. A knee injury in his first preseason game proved to be ruinous for Carter. But, he never stopped trying to come back. He played the next season but had little success. Carter continued to battle injury before finally stepping away after eight seasons and just over 1,000 yards.

Michigan State?s Tony Mandarich, OT, Packers, No. 2 overall, 1989. The ?Incredible Bulk? looked the part and talked the talk. He even had the menacing tattoos, road a Harley and listened to Guns N? Roses. The only problem: He couldn?t block. And that?s a problem if you?re an offensive lineman. Hailed by many as the best offensive line prospect ever, Mandarich was an absolute flop in three forgettable seasons in Green Bay. He did rebound to play some quality football at guard for the Colts.

Penn State?s Blair Thomas, RB, Jets, No. 2 overall, 1990. He spent four very unremarkable seasons in New York, notching 2,009 yards rushing after a promising debut. And he notched a total of seven touchdowns in that time. Injuries impacted his career, but Thomas seemed to lack savvy, want-to and instincts. Other than that, he was great.

Iowa?s Robert Gallery, OT, Raiders, No. 2 overall, 2004. He just couldn?t hack it as a tackle. Stiff, mechanical. But, to Gallery?s credit, he kept working and eventually became a key contributor at guard. Still, much more than a ?workmanlike career? was expected from the No. 2 selection. But, he always will have a soft spot in my heart because of his hair.

Michigan State?s Charles Rogers, WR, Lions, No. 2 overall, 2003. This guy could be the poster child for Detroit Lions draft history. Broken collarbones basically ruined his first two seasons. Then, in 2005, he was suspended for four games for a third violation of the NFL?s drug policy. The one-time Biletnikoff winner was released a year later with 36 career catches.

Michigan?s Desmond Howard, WR, Redskins, No. 4 overall, 1992. He had his moments (Super Bowl MVP). But when you are picked No. 4 overall, you need to be more than a return man. Howard never developed into a top-flight receiver. He had 66 catches in three seasons in D.C.

Nebraska?s Trev Alberts, LB, Colts, No. 5 overall, 1994. Who can forget how Mel Kiper, Jr. railed on this pick back in the day? Alberts? promising career was derailed by an elbow issue that confined him to only 29 games. So, his career is a story of woulda-shoulda-coulda.

Penn State?s Curtis Enis, RB, Bears, No. 5 overall, 1998. In three seasons in Chicago, Enis averaged 3.3 yards per tote and never even reached 500 yards rushing in a season. Injuries derailed his career before it got off the ground. He was done by 2001.

Ohio State?s Vernon Gholston, OLB, Jets, No. 6 overall, 2008. Gholston epitomizes the old scout adage: Looks like Tarzan, plays like Jane. He never made the adjustment to the NFL, failing to register a sack in 45 games for New York. He had averaged 11 in each of his last two seasons at Ohio State and wowed with 37 reps at 225 pounds. You?ll be hard-pressed to find a bigger flop in NFL draft history.

Penn State?s Todd Blackledge, QB, Chiefs, No. 7 overall. Oh, what could have been, Kansas City Chiefs. The KC brass infamously tabbed Blackledge ahead of Jim Kelly and Dan Marino. Man, it hurts to type that. Kelly and Marino went on to Hall of Fame careers, as well as 1983 No. 1 overall pick John Elway. Blackledge? He never started more than eight games in a season and can?t get a free meal in Kansas City ever again.

Ohio State?s Ted Ginn, Jr., WR, Dolphins, No. 9 overall, 2007. Ginn was supposed to be a game-changing, electric wideout who struck fear in the heart of foes. Alas, the big plays were few and far between. He has made more of an impact as a return man, running back six kicks for scores in his career. Ginn has 11 career TD catches in seven seasons and never has averaged over 15.4 yards per grab.

Penn State?s Aaron Maybin, DE, Bills, No. 11 overall, 2009. In his first two seasons with the Bills, Maybin notched as many sacks as I did: zero. He subsequently was traded to the Jets, where Maybin continued to live up to his billing as a massive flop. But he did muster six sacks in 2011 before departing New York after two seasons. Guys like this get coaches fired.

Nebraska?s Adam Carriker, DE, Rams, No. 12 overall, 2007. He never seemed to fit as an end/tackle in the Rams 4-3 scheme. But when he was dealt to the Redskins following three mostly forgettable seasons in St. Louis, Carriker started to make a move as an end in their 3-4. Then, injuries struck that proved ruinous to his time in Washington.

Nebraska?s Jason Peter, DE, Panthers, No. 14 overall, 1998. In four seasons, Peter had 7.5 sacks. It didn?t help that he was plagued with neck issues that ultimately forced his retirement after the 2001 season.