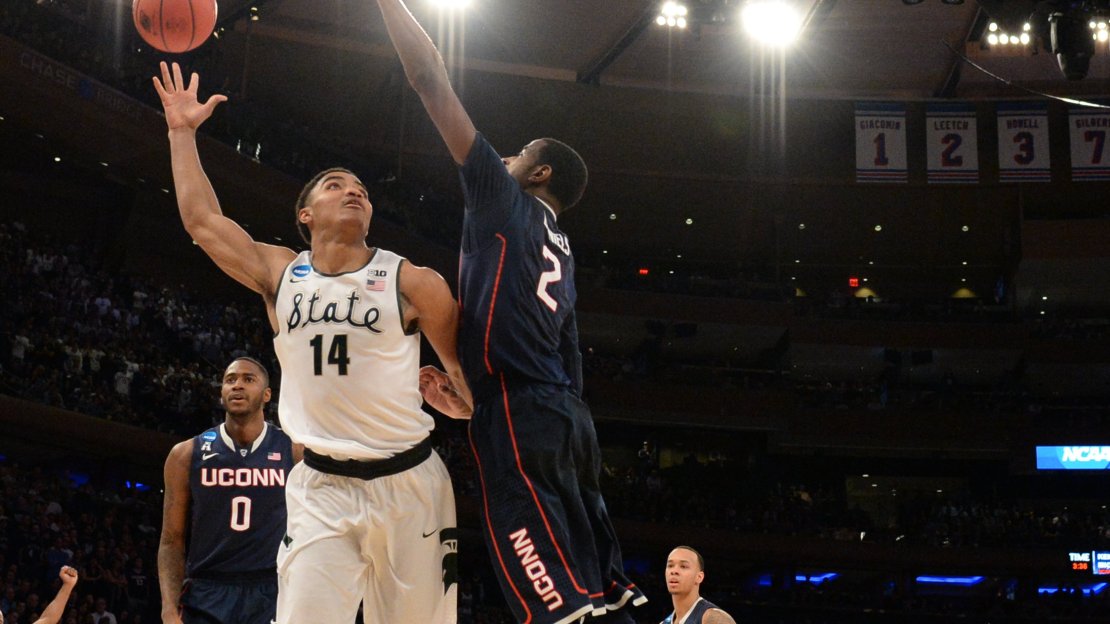 Nice piece by Doug Lesmerises of Cleveland.com on how the Big Ten is excelling at developing NBA players. It?s also nice that most are guys who stayed at least two years. Lesmerises says it's those guys in the middle – good enough to go early but not sprinting out the door from day one – who have elevated the play in the Big Ten.

Man, I have a feeling Meyer vs. Franklin is gonna turn into a great rivalry. By the way: They meet in a prime-time game in State College on Oct. 25.

The gang at Eleven Warriors has taken a look at the film from the Ohio State spring game.

Even with Carlos Hyde gone, it looks like the preferred running scheme will be the inside zone once again. And it looks like quick passes to a fleet of athletic wideouts like Johnnie Dixon and Michael Thomas will become a staple.

The life of Princess Lacey was celebrated last night at Michigan State. And there wasn?t a dry eye in the Breslin Center.

?This is the only job that I would have ever considered taking,? he told the Detroit News. ?When I walked away from CBS, I didn?t think I?d ever be in a broadcast booth again. I didn?t plan on this.

?It?s a dream come true for me. There?s a real coming home aspect for me.?

I still am a bit vexed as to why Horford wouldn?t just finish his career in Ann Arbor, what with Jordan Morgan gone and Mitch McGary?s status unknown. You?d think Horford would get a lot of laying time next season. Oh, well.

When it comes to running backs, Northwestern will have a nice collection of them in 2014. In fact, it looks like one of the top crops in the Big Ten for next season.

Venric Mark, Treyvon Green, Stephen Buckley and Warren Long. Not bad, huh? Where is one-time mega recruit Malin Jones? He has fallen way out of favor.

Check this out: A list of 2014 college hoops transfers from ESPN. Just a sea of names. Incredible, really. You know every coach has this page bookmarked.

I will leave Iowa fans with this look at the five best decisions by Iowa coach Kirk Ferentz from the Des Moines Register.

No. 1: Hiring Reese Morgan from the prep ranks in 2000. The guy has an eye for talent and can coach.

If Nebraska could swap places right now with Missouri — SEC East for Big Ten West — would you do it, #huskers fans?

Heavens, no. The SEC East is killer with Florida, Georgia and South Carolina. And you know Tennessee will get better.

Fresno is always a tough place to play.

If Missouri does come after Matt Painter and Painter would be interested, his #Purdue contract calls for a $1 million dollar buyout. FYI.

I would be stunned if Mizzou calls. Plus, Painter?s deal at Purdue is now much improved from the last time he danced with Missouri.