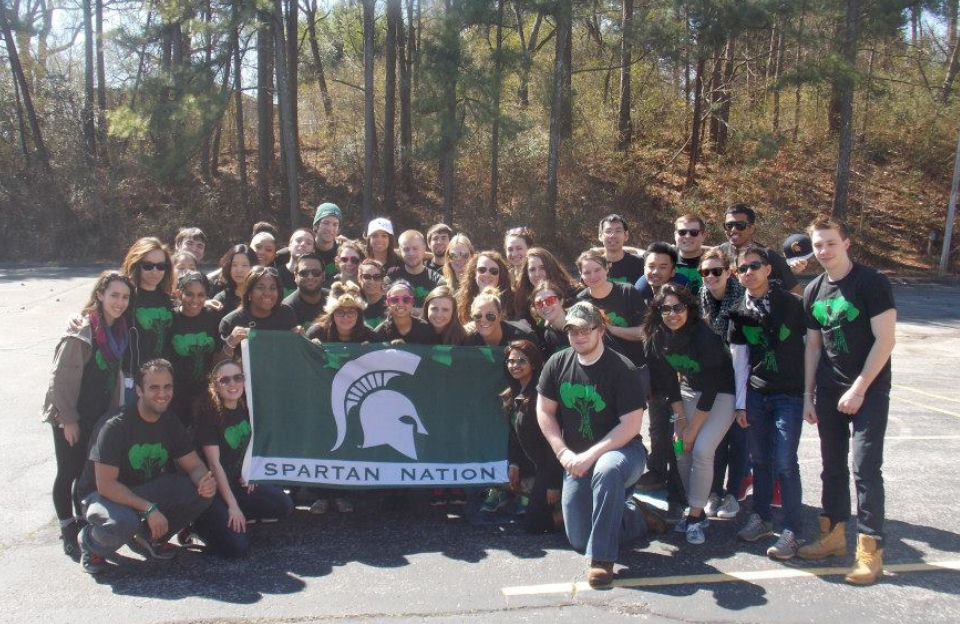 On Feb. 28, three buses set out from Michigan State's South Case Hall, each on a different route but all headed for the same destination. Along the way during the nine-day trip, each bus visited five different cities, where students performed local service projects before the groups converged in Atlanta.

Julie Wilson, a Michigan State senior and biomedical laboratory diagnostics major, rode the tour's blue bus, which made stops in Charleston, W.Va., Columbia, Md., Richmond, Va., Charlotte, N.C., and Augusta, Ga. During the trip, Wilson and her classmates mulched a community center, cleaned a park and a cathedral, assisted an organization called Second Chance and, after meeting up with the rest of the MSU chapter, planted trees and grass in a park in conjunction with Trees Atlanta.

Wilson was first introduced to STLF as a sophomore when a friend, who knew she had been looking for a more rewarding service experience, mentioned the "Pay It Forward Tour."

"What really sparked my interest was the emphasis on leadership and reflection," Wilson said. "STLF believes that leadership is inherent in everyone and that it just needs to be revealed. Before STLF, I joined a bunch of different groups where I didn't meet anyone, sat and listened to people talk and the only service projects that they organized were service projects they had been doing for years. There was no new initiative."

Wilson cites a wide variety of experiences on past tours: restoring a youth center in Kokomo, Ind., tutoring students in an after-school program on a North Dakota Native American reserve, planting trees in Joplin, Mo., after the devastating 2011 tornado, and removing an invasive plant species from a Cincinnati park. And as an STLF Chapter Core and Regional Core member, she plays a role in organizing and directing the bus tours.

STLF favors a core model — a group of 3 to 5 individuals — and "collective action" over a traditional leadership hierarchy. According to its website, "student leaders in STLF acquire proficient skills in organizing, working in teams, decision-making, public speaking and group facilitation." And Wilson says those opportunities were available from the moment she joined STLF, unlike at other service organizations she had tried.

"I felt as though the executive boards were all seniors and there was no way for a freshmen to gain entry into the leadership roles," Wilson said of those previous experiences. "But with STLF, I saw that there were sophomores leading and organizing trips and being responsible for over 40 college students. No other organization treated new members like that."

The "Pay It Forward Tour," which first launched at the University of Minnesota in March 2004, shortly after STLF's inception, is the organization's flagship college program. In addition to the tour's micro initiatives, a larger goal is to motivate student participants to continue making a difference through service long after graduation.

"STLF isn't just a service trip," Wilson said. "It helps people grow into servant leaders through its programming. That is what deeply resonated with me."

The bus tour has become increasingly popular on the Michigan State campus, where high demand this spring prompted STLF to make special accommodations. After the three buses leaving out of East Lansing were filled with 120 students, 16 more enrollees were funneled to the tour sponsored by the chapter at nearby University of Michigan — the school's first.

Sophomore Robert Nebergall, one of the MSU students diverted to the Ann Arbor chapter, didn't mind the detour. He says he found exactly what he was looking for in what was also his first tour, and had "an amazing time."

Nebergall's group made stops in Louisville, Ky., Nashville, Tenn., Asheville, N.C., Charleston, S.C., Midtown, Ga., and Atlanta, spending time with residents at a retirement home and cleaning garbage from a river, among other volunteer works.

"Every city was different and presented a new challenge that we overcame together," Nebergall said. "The things that we accomplished in just two or three hours were outstanding, and I truly believe that if everyone took time to do tours like this, the world would be so much of a better place."