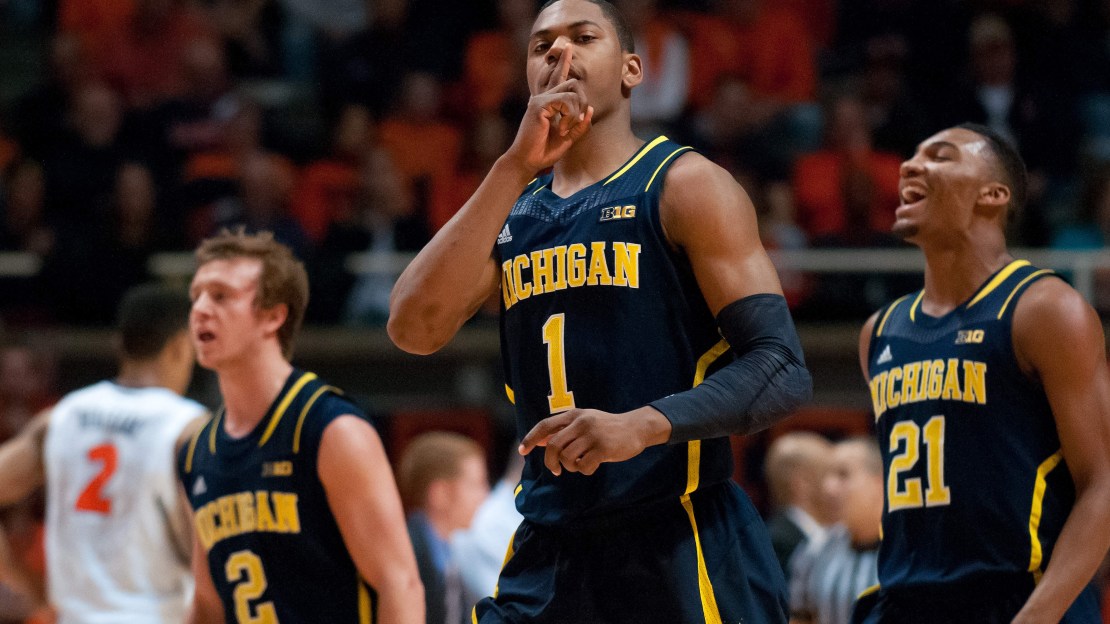 Michigan won the Big Ten title outright last night on the strength of a shockingly easy win at Illinois. Sure, the Illini don't have an impressive record, but John Groce's team came into the matchup on a three-game winning streak, during which no opponent broke 0.9 points per trip. This was a hot team whose defense was absolutely stifling conference opponents. Talk had even begun of this Illinois team somehow sneaking back onto the bubble in the season's final week.

The Wolverines obviously didn't get the memo. Michigan had an historic night from three, knocking down 16 of 23 from downtown on its way to 1.33 points per trip. For those keeping track at home, that's a 70 percent conversion rate on threes. When something like that happens, you can ignore everything else about the game – that team isn't losing.

Nik Stauskas made a strong statement in the Big Ten player of the year race, knocking down 7 of 9 threes on his way to a ridiculously efficient 24 points.

Still, this was far from a one-man performance; the rest of the Wolverines shot a staggering 64 percent on threes. Even John Beilein was impressed:

Beilein on Michigan's shooting: "I haven't seen that in practice even."

Coming into this game, Michigan had a significant home/away split when it came to three-point shooting accuracy, but that gap was all but eliminated by the net-scorching that occurred in Champaign.

Of course, Michigan isn't the outright Big Ten champion simply because of three-point shooting. The Wolverines are excellent at limiting turnovers, and they are accurate from all over the floor. So accurate, in fact, that there's nobody in the conference that comes close to them from inside the arc either. 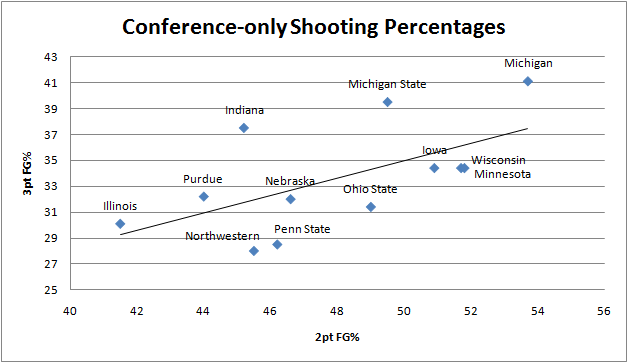 Simply put, this is an elite offense, one that could carry Michigan to the Final Four all on its own. It may have to, as that defense is mighty permissive on most nights.

For Illinois, it's back to the drawing board, with any hopes of making the NCAA tournament now relegated to a four-day stretch in Indianapolis. Still, the program can take solace in the fact that, on Senior Night, only 30 combined minutes went to seniors. This team will be a lot better next season, and freshman Kendrick Nunn continues to establish himself as a quality player. On this night, Nunn scored 14 points on 10 shots, mostly on drives to the bucket – a nice complement to the three-point accuracy he has been providing lately.

Tonight, it's a doubleheader on BTN, starting with an important bubble battle between Nebraska and Indiana. The nightcap finds Purdue visiting Wisconsin. The conference title may have been claimed, but there's still much to decide in the regular season's final week.