Big Ten Geeks: It's a thin line this year 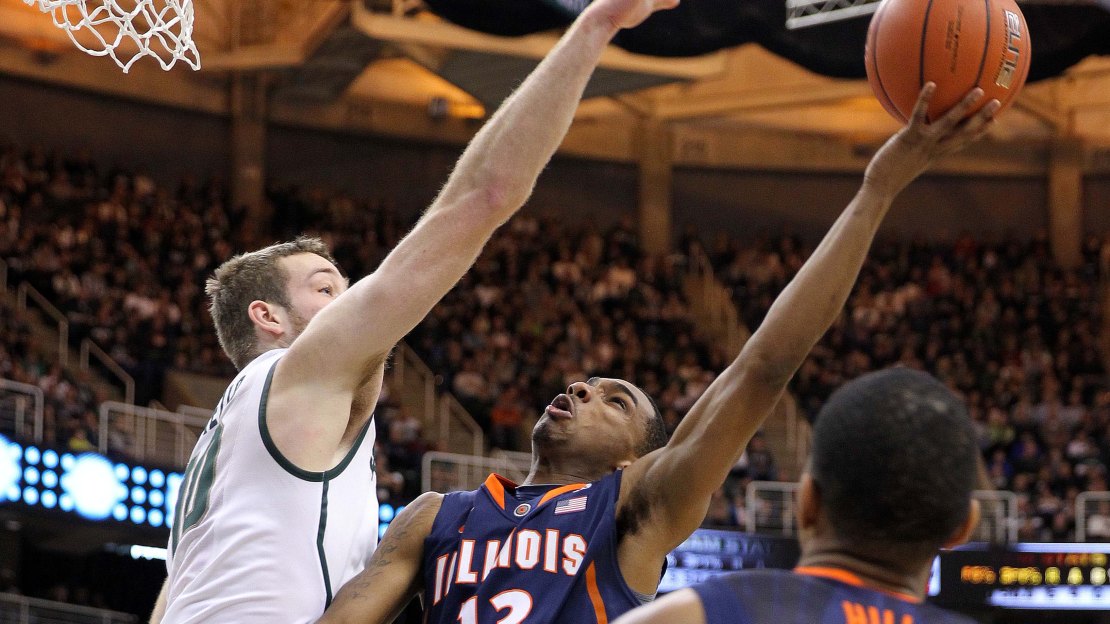 Michigan clinched at least a share of the Big Ten title this weekend, as it took care of business against Minnesota at home while Michigan State was upset by Illinois in East Lansing.

Michigan mostly let Minnesota hang around until the last couple of minutes until it flipped the #WinTheGame switch. For once, Michigan?s defense showed up, as it held the opponent to under a point per possession for the first time since the first week of February. Nik Stauskas, Caris LeVert, and Glenn Robinson III once again powered the offense, combining for 46 points on 36 shots.

For Minnesota, this game was all upside and no downside, and the projections still mostly have the Gophers sneaking into the Dance. Richard Pitino?s team finishes the season at home against Penn State, so as must-wins go, it?s a relatively easy one. Still, it?s hard to see this team making much noise in the postseason. Generally speaking, conference-worst defenses tend not to fare well in March.

Illinois, meanwhile, continued its fine defensive run by holding the Spartans to just 0.83 points per possession-MSU?s lowest mark in conference play in the past two seasons. That?s no small feat, especially considering that Michigan State was at full strength for the first time in a long time. What?s been key for Illinois in its recent defensive excellence has been forcing turnovers: 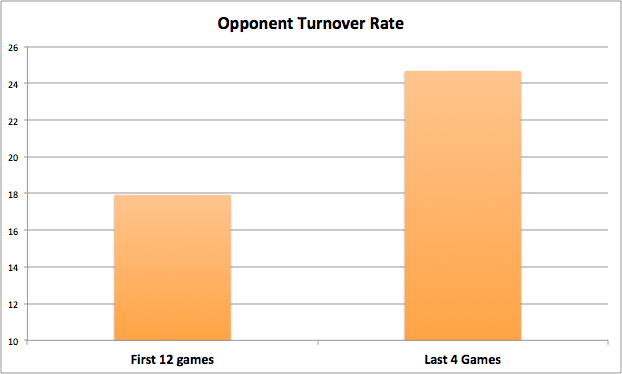 This is nothing new for John Groce?s teams, as Illinois led the Big Ten in forcing turnovers last season. Of course, that only amounted to the 7th-best defense in the conference. And while this year?s Illini currently sport the 3rd-best defense in the Big Ten, that may soon change with games against Iowa and Michigan remaining (the first and third-best offenses in the Big Ten, respectively). But if Illinois somehow manages to put together an above-average defense by not doing much else besides force turnovers, they?ll have proven me wrong. I?m on record as doubting that a turnover-focused defense can get it done in the Big Ten.

Tom Izzo wasn?t too happy after the loss. He was upset with his team?s lack of energy, he acknowledged that Keith Appling wasn?t at 100 percent, and he was upset with the media. Wait, what?

Izzo brings up things thrown at him this week, again. Says he's "disappointed in some of you."

I?m not sure what the media had to do with Denzel Valentine throwing the ball away 5 times, so I?ll have to take a pass on that.

But I can certainly understand the frustration. Remember, this was a top-3 team at the beginning of the season. And now, the Spartans might not get a 3-seed. The Streak is very much in jeopardy.

Iowa seems to be looking over at Michigan these days and saying, ?hey-let?s do that!? And by ?that,? I mean scoring lots of points while being completely indifferent about playing defense. The last time an Iowa opponent scored under a point per possession was January, and the normally listless Purdue offense managed to eclipse that mark as well on Sunday. But just as it wasn?t enough against Michigan, it wasn?t enough against Iowa. The Hawkeyes largely won this game at the free throw line, where they attempted 36 unguarded shots, as well as the fact that they turned the ball over just five times. Thus, Purdue lost by 7 despite thoroughly outshooting the Hawkeyes. Ronnie Johnson had the worst game of his season (career?) with five points and a whopping 7 turnovers.

As good as Iowa has been on the whole of the season, it?s not hard to make the case that the team should be better than sweating out home wins against Purdue. What?s more baffling is how a team this tall can allow Purdue to shoot 56 percent on two-pointers (Purdue is the 2nd-worst two-point shooting team in conference play, converting on 44 percent of its attempts). This was not an imposing offense, by any means.

Only purdue could airball 3 shots in 5 seconds.

Wisconsin handled a road trip against Penn State, but was probably a bit fortunate that the Nittany Lions were ice cold from the outside. While guarding the three-point line has been one of the last things to fail for Bo Ryan?s defense this year, even against the Badgers you expect better than 1 for 13. Wisconsin will take it though, as the team still appears to be on-track for the Big Ten?s highest seed in the NCAA Tournament. Ben Brust and Josh Gasser led the way with 28 points on 17 shots. Tim Frazier scored just 10 points in what was likely his final home game (although there could be an NIT or CBI invite looming). It?s too bad that Jermaine Marshall sought warmer pastures at Arizona State-this might have been an NCAA Tournament with him on board.

Indiana took down Ohio State despite the absence of center Noah Vonleh, which was all the more impressive considering Ohio State scored just 0.86 points per possession. Granted, OSU?s offense has not been a thing of beauty this season, and an 0?fer from 3 is going to put a dent in any offense, but Vonleh also happens to be the Big Ten?s best defensive player (from my vantage point, at least). The oft-doghoused Hanner Mosquera-Perea put up a fine line in Vonleh?s absence, scoring 8 points (4 shots), securing 5 defensive rebounds, and blocking 3 shots, all in just 15 minutes. Over a full Vonleh-allotment of minutes, that?s a very Vonlehey line.

Ohio State?s offense really was not that bad, but for the anchors of Aaron Craft (7 points on 11 shots, 3 turnovers in 40 minutes) and Sam Thompson (4 points in 33 minutes).

VIDEO: Congrats to @IndianaMBB on its fourth straight home win over a ranked team. WATCH all of today's top plays – http://t.co/7lRzNXxNK1

With the win, Indiana maybe gave itself an outside shot at an at-large bid, presuming the Hoosiers win out the rest of the way (vs. Nebraska and at Michigan). But that?s a tall order anyways. As the old cliché goes, one game at a time.

Nebraska continued its quest for an at-large bid by protecting its home court against Northwestern. This game wasn't for the faint of heart, as the teams combined to score 0.89 points per possession. Shavon Shields (22 points on 9 shots to go with 10 rebounds) and Alex Olah (20 points on 9 shots to go with 7 boards and 4 blocks) played some excellent basketball, while their teammates around them mostly missed shots. This matchup also provided a showdown of two of the, um, most "uneven" point guards in the Big Ten in Dave Sobolewski and Tai Webster. Sobolewski played 13 minutes, committed 2 fouls, and attempted (and made!) a single shot (a three!). Webster, on the other hand, committed four turnovers in 18 minutes, and missed his only field goal attempt (a three!). Advantage Sobolewski.

I fully expect for JerShon Cobb to take over point guard duties next year (with some help from Tre Demps), but Nebraska won't have such easy answers. The good news is that the jump from freshman to sophomore is typically the biggest in a player's career. The bad news is that Webster has a long way to go.

It?s hard not to look ahead to the Big Ten Tournament that starts in a mere 10 days. The seeding scenarios are starting to pop up, and-much like the regular season-they?re pretty volatile.

This week kicks off with Illinois looking to keep it going against Michigan. If the Illini can pull off the upset, things will get really interesting. I might have to start talking about Illinois and the bubble. More than anything, that may tell you how good the bottom of the conference is. If Illinois loses its next two games, the team probably finishes in last place. If they win their last two, they might sneak in the NCAA Tournament.

It?s a thin line this year.