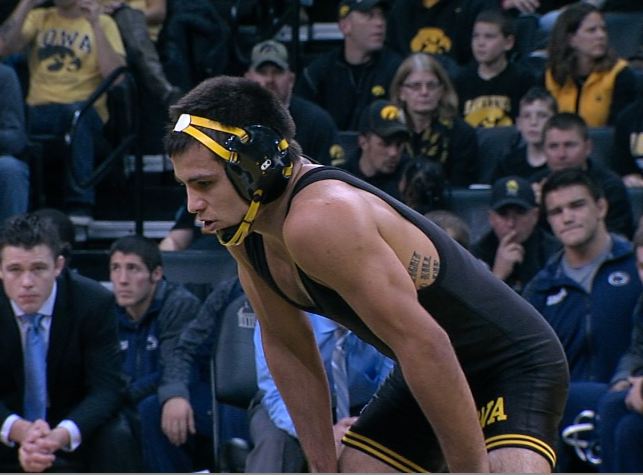 We decided to have a little fun providing a preview to this year's B1G Wrestling Championships on March 8-9 at Wisconsin. BTN wrestling analyst Jim Gibbons, an NCAA champion both as a wrestler and coach at Iowa State, will break down one weight class a day, and pick a winner, leading up to the event. Today, it's the 133-pound weight class.

Pick: Tony Ramos, Iowa. It's a lot easier to go somewhere you've already been, and for Wisconsin senior Tyler Graf, now is the time to recapture his old form in front of his people in Madison. He's been up big in his career on the best in his weight class, Iowa's Tony Ramos last season, and this year #1 Joe Colon, of Northern Iowa, at Midlands. He is the guy nobody in this weight class wants to see get hot.

That said, the guy I think who is due to win the B1G title is Ramos, Iowa's two-time Big Ten runner-up. What makes him great is his attack rate on the feet and his high percentage rate on his TD finishes. He works the head well, tiring out opponents so he can come back from larger deficits than most college wrestlers. He's not the most talented athlete in the weight, but you can tell Ramos has worked hard for what he's achieved in our sport.

Mr. Upside: Cashe Quiroga, Purdue. There are four guys who are pretty evenly matched: Minnesota's David Thorn, Ohio State's John DeJulius, Penn State's Jimmy Gullibon and Quiroga. Thorn looks to be the one emerging from the pack. An All-American last year at 125, it would be no surprise if he places in the top three.

That's why I'm picking Quiroga as my Mr. Upside in his senior year. He's battled through injury and illness in his career. He's been on the NCAA stand as a freshman and given the fire I saw in the dual with Ohio State, I think he will have a good post season.