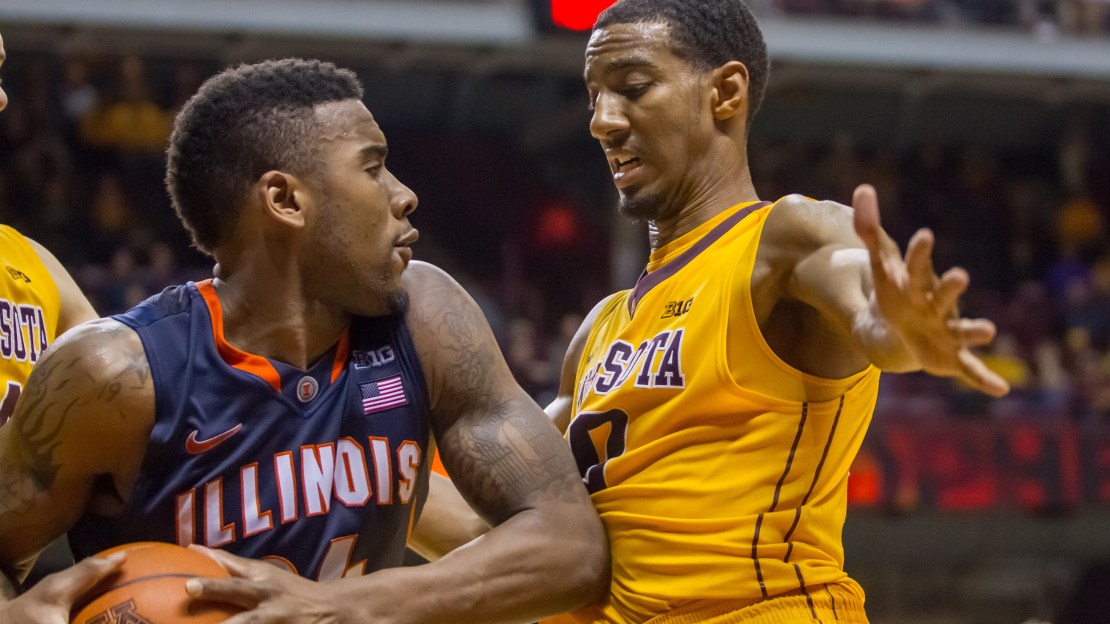 Illinois shocked Minnesota in the Barn on Wednesday, dealing a serious blow to the Gophers' NCAA tournament hopes. Minnesota actually got off to a great start in this game, leading 14-3 after eight minutes, but it was all Illinois after that. The Gophers had a terrible night from the outside (4-for-25, 16 percent), and the turnovers mounted as they tried to make plays going to the basket.

All told, the Illini held Minnesota to its lowest output of the season, and a big night from freshman Kendrick Nunn (19 points, 5-for-7 from three) was enough to carry the offense. Nnanna Egwu played his best game of the season, posting a 14-11 double-double with four blocks. When Illinois gets that kind of play from the center position, it can compete with anybody.

Does this loss mean Minnesota's at-large hopes are doomed, barring some big upsets over the next couple weeks? Not necessarily. At least one measure still gives the Gophers a shot – the Easy Bubble Solver. As we've discussed before, the Easy Bubble Solver involves adding together each team's KenPom rank and RPI rank, then sorted from smallest sum to largest sum. It's a simple way of balancing performance (KenPom) and results (RPI), and it is a reasonably accurate predictor of the bubble.

Minnesota is currently Easy Bubble Solver's next-to-last team in (which would mean a play-in game), and that cutoff line is assuming no bid-stealers. The Gophers are sitting right on the razor's edge.

I feel like Richard Pitino's team is an at-large lock if it manages to split its remaining four games, which would result in an 8-10 conference mark. That's much easier said than done, as three of those four opponents are in the KenPom top 20.

The loss to Illinois puts the Gophers in a tough spot, but not all hope is lost. Should Minnesota win only the Penn State game to finish 7-11, I still think two wins in the Big Ten tournament might be enough. We say it every year, but the bubble just isn't that good, and we'd be talking about a 20-14 squad with a top 20 strength-of-schedule. Barring some wild conference tournament results, that could be enough.

On Thursday night, Nebraska had no trouble dispatching Penn State. The Huskers led by as many as 27 points before a fake rally brought the final margin down to 13.

Terran Petteway was phenomenal, scoring 26 points in 28 minutes, and he got solid support from multiple teammates. This is clearly a team that is clicking right now.

For those wondering about Nebraska's bubble hopes, here's the next 32 teams in EBS.

Nebraska isn't quite on the bubble, but the Huskers are within striking distance. It seems to me that getting to 10-8 wouldn't quite be enough, given Nebraska's fortunate (or unfortunate?) single plays. The Huskers got the draw of facing Iowa, Michigan State, Wisconsin, and Minnesota once – all teams ahead of them in the pecking order. Nebraska's Big Ten schedule includes 10 games against the conference's five worst teams, so reaching 10 wins isn't quite as impressive as it initially appears.

My feeling is that the Huskers need to get to 11-7 then have a decent showing in the Big Ten tournament to get real bubble consideration. Winning out to finish 12-6 would seemingly make them a lock.

I extended that out-of-the-tournament table as deep as I did to show that Illinois now has an outside chance at an NIT bid. Easy Bubble Solver slots the Illini ahead of the other conference NIT hopefuls – Indiana is another nine spots down, then Penn State is next, another 20 spots after that. Illinois probably needs to win two of its last four to get into decent NIT position, but that would be a nice landing spot for a team that is relying more and more on its freshmen.

This weekend brings some really good matchups, with none bigger than Sunday's Michigan State at Michigan tilt. The fate of the conference title hinges heavily on the outcome of this game.