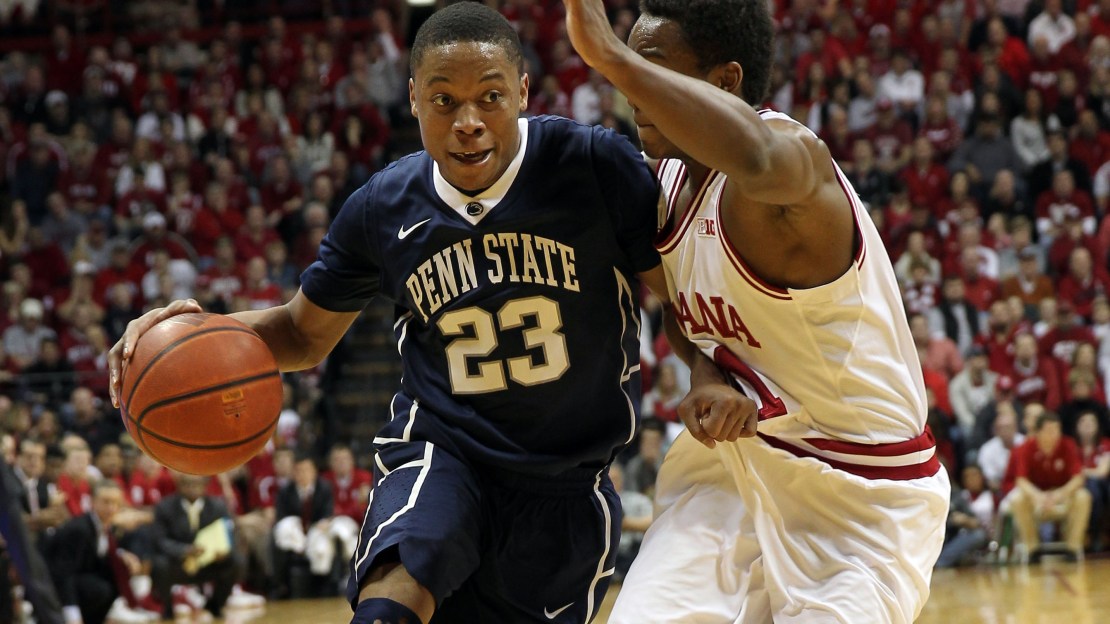 On Wednesday night, Penn State stamped out any remaining Indiana tournament hopes with a shocking road upset. The Hoosiers seemingly had this game in hand the entire way, and it felt all but over when Indiana held an 11-point lead with three minutes remaining. Somehow, the Nittany Lions roared back, and they took their first lead of the entire game on a Tim Frazier layup with six seconds remaining. Yogi Ferrell missed a tough jumper at the horn, and the upset was complete.

Just how crazy was that finish? Using KenPom's win probabilities, Penn State had just a 0.2 percent chance of winning this game when the clock ticked under three minutes. It was one of those situations where everything had to go wrong for Indiana and everything had to right for Penn State, and that's exactly what happened.

With the loss, Indiana now sits at 4-7 in conference play, and there are two remaining games that look like  near-certain losses (at Wisconsin, at Michigan). That puts 9-9 as an absolute best-case finish for the Hoosiers, and even that is unlikely. This Saturday's game at Purdue is a toss-up, as is an upcoming visit to Northwestern. It seems ridiculous to say it, but Indiana might not even make the NIT. For a squad that was projected by many to be a borderline top-25 team, it's been a trying season to say the least.

Nebraska used some good defense and a career night from Shavon Shields to pull away late from Illinois. Shields scored 33 points on only 12 (!) field goal attempts, thanks to both his slashes to the hoop and his 15-for-15 night from the foul line. The rest of the Huskers were fairly inefficient, but Shields carried the team to 1.10 points per trip and the win.

Nebraska has an outside shot at finishing .500 in conference play, which would be an amazing accomplishment in Tim Miles' second season. Miles took over a program with almost nothing in the pipeline, and he's got the Huskers flirting with .500 in the nation's top conference. Miles doesn't seem to be getting much Big Ten coach of the year buzz, but he should be.

Thursday night's results were quite predictable. KenPom projected Wisconsin to beat Minnesota by eight, and that's exactly what happened. KenPom projected Michigan State to beat Northwestern by 14, and the Spartans won by 15. In a conference season that has felt topsy-turvy at times, it was a rare night of completely expected results.

While there's no shame in leaving Madison with a loss, the Gophers now sit at 5-7 in conference play with three tough games still looming (at Ohio State, vs Iowa, at Michigan). It's certainly possible for Minnesota to win one of those three toughies, but, if not, the team appears headed for an 8-10 conference record. Would that be enough to get into the NCAA tournament?

We're not going to turn into a Bracketology blog. Plenty of other people do that, and it takes a lot of dedication and effort to truly do it well. Instead, we Geeks take the easy way out.

Developed by Drew Cannon, the Easy Bubble Solver gets you most of the way there, without all the work.  Click that link to see the details, but you basically add together KenPom rank and RPI rank for every team, then sort them from smallest to largest. That ordering gives you a solid idea of which teams are in and which teams are out.

Since RPI still isn't fully ripe, we will use the projected RPI ranks from RPIForecast.com. We're choosing the forecast that does not include conference tournaments, so consider this to be a pre-Big Ten tournament forecast of where the bubble stands.

According to the Easy Bubble Solver on the morning of February 14, 2014, here is your NCAA tournament field (ignoring the low-major conference tournament champs that will fill in the 13/14/15/16 seed lines):

At the moment, Minnesota appears to be safely in the tournament, and that is with RPIforecast assuming an 8-10 record for the Gophers. A Thursday loss at the Big Ten tournament could drop Minnesota a few spots into a play-in game, but it seems that 8-10 really might get it done for the Gophers.

Of course, the Easy Bubble Solver is no replacement for the selection committee, and Minnesota would be better served to not be among the handful of teams fighting for the final couple spots. To get into that secure position, the Gophers will need to pull an upset or two down the stretch.

Minnesota needs to keep first things first, as this Sunday's visit to Northwestern could be a landmine. Lose that one and the outlook is very different. It's crunch time for Richard Pitino and his squad.

The weekend's marquee matchup comes on Sunday as Wisconsin visits Michigan. The Badgers seem to have recovered from a brief shooting slump, so we should see plenty of offensive fireworks in this one, with the Wolverines looking to maintain the inside track on the Big Ten title.