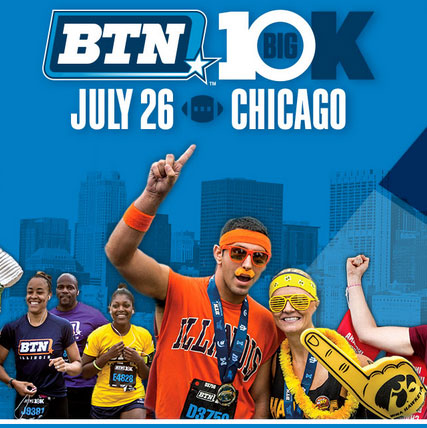 CHICAGO -Registration opens at 10 AM today for the BTN Big 10K, the summer race that turns the Chicago lakefront into a Big Ten Tailgate Party. The nationally televised 10K and 5K races return to Soldier Field on Saturday, July 26. Special Olympics Chicago is the race?s charity partner for the second straight year.

New this year, Chicago?s World Famous Garrett Popcorn Shops® is offering a certificate for a One Gallon Tin of the Chicago Mix to each of the first 1,500 runners who sign up for the race.

Last year, a record-breaking 13,000 runners participated from 43 states and five different countries. This year?s race is expected to sell out, so runners are encouraged to sign up early.

Fleet Feet Sports is producing the race for the third straight year.

Those who register before July 1 are guaranteed an official race shirt in their favorite school?s colors. The race shirts are available in each of the 14 Big Ten school colors, including the University of Maryland and Rutgers University, which officially join the Big Ten on July 1.

?Big Ten fans have so much pride in their schools that they will travel from far and wide to kick off the football season,? said Erin Harvego, BTN vice president of marketing. ?The BTN Big 10K really captures and magnifies that spirit, and brings Big Ten fans together in a way that no other event does.  That?s the reason the race has become the fastest-growing in the region.?

The course begins on the Soldier Field campus and takes runners down Chicago?s lakefront. In a departure from previous years, the planned finish line will actually be integrated into the Tailgate Party, so runners will be greeted by cheering spectators as they cross it. Runners will also be accompanied by BTN talent, former Big Ten greats, school cheerleaders and mascots, and the popular BTN2Go ?mini-mascots? also will make an appearance. The waterslide, also a fan favorite, returns as well.

The 10K will include participation by top area runners as well as many former varsity student-athletes from Big Ten schools.  Awards and cash prizes will be presented to the top five male and female 10K finishers overall. This year there will be an additional cash prize for the top male and female runners who are also alumni of a Big Ten University. Prizes also will be awarded to runners who show the most school spirit through festive costumes and school-inspired accessories. Every finisher of the 10K or 5K will receive an official BTN Big10K commemorative medal, which this year will feature a new design.

The event will be followed by a Tailgate Party, which will include music, football-themed games and activities, such as corn hole, field-goal kicking and the 50-yard dash, as well as appearances by BTN talent and former Big Ten athletes. Also, the Tailgate Party will include tents hosted by the Chicago Big Ten Alumni Associations and food and beverage concessions. Each race finisher 21 and older will also receive a free beer.