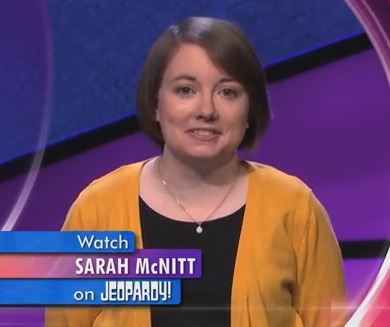 For Sarah McNitt, a student advisor at the University of Iowa, the remarkable joy that came from winning five days in a row on Jeopardy! was mitigated by the fact that her mother passed away just one month before she appeared on the show.

So to salute the woman who helped make her the kind of person who could win five days in a row on Jeopardy, McNitt is using some of her winnings to support a cause that could someday prevent her mother?s illness from being harmful to others. Marilyn McNitt died in October of 2013 from leukemia at the age of 62. Sarah appeared on Jeopardy! in November and won five times, although the episodes did not air until mid-January 2014. Sarah was required to keep her mouth shut about how she did until the shows were broadcast.

McNitt won over $91,000 (before taxes) in her six episodes on the show, and vowed to use a portion of those winnings to fund blood and bone marrow drives in Iowa City.

?I have talked to the local Leukemia & Lymphoma Society offices in (her native) Michigan and Iowa about forming a fundraising team for the LLS Light the Night Walk in the fall,?? McNitt said. ?A friend of ours who has already organized two blood drives in honor of my mother at the Reagan Presidential Library is planning on expanding this effort to other presidential libraries, and I may join in this as I'm able to.?

McNitt?s mother was an archivist at the University of Michigan?s historical library with masters? degrees in history and library science. McNitt said her mom was more of a crossword winner than a Jeopardy player, but the game held great meaning to the family for decades.

?When I was growing up, if the TV was on in the 7:00 hour, it was tuned to Wheel of Fortune and Jeopardy!,?? said McNitt, 33. ?I remember watching the show as a child, and the distinctive ?boop boop boop boop? noise that the board made when the categories filled in. I miss that noise!

?When I was a graduate student, we used to watch Jeopardy! reruns in the student lounge at lunchtime,?? she said.

McNitt first applied to be a contestant on Jeopardy! in 1999 but did not get a chance to audition until July of 2013, and the first time they asked her to audition happened to be the same day as her wedding to Jason Sprague, a PhD student in religious studies at Iowa. The show producers allowed her to audition the next day, and she was invited on in November.

?It was exhausting and exhilarating,?? McNitt said of her time in Hollywood taping the Jeopardy shows! over two days. ?The staff I came into contact with were very supportive and positive and encouraging and the other contestants are full of enthusiasm about fulfilling what is for many people a life's dream.  It's a great environment in which to spend a day or two.  It was everything I thought it would be and more!?

Now McNitt is making an effort to turn her good fortune on Jeopardy! into future good fortune for someone stricken with a life-threatening blood disorder.