B1G Whiteboard: It's kind of a big week for Iowa 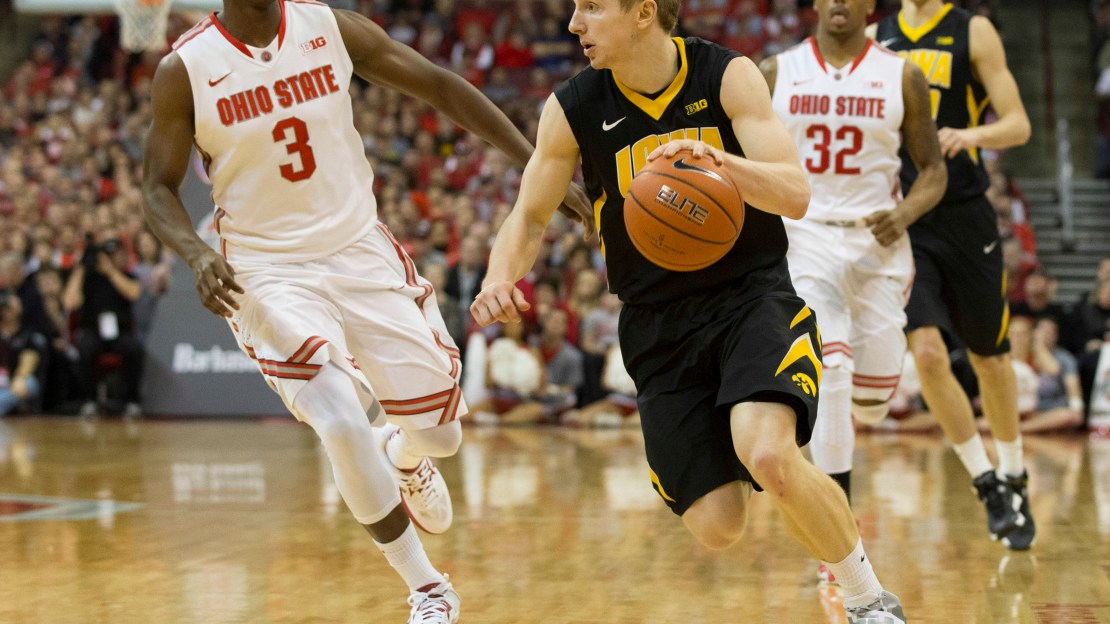 Can this week be any more wild and crazy than this past week? Check out the zaniness that took place the previous seven days.

Please, sit down, first: Northwestern wins at Wisconsin and at Minnesota; Michigan falls at Indiana; Penn State wins at Ohio State; Ohio State prevails at Wisconsin; the Hoosiers lose at Nebraska; Michigan State falls to Georgetown on a neutral court.

About the only constants have been Illinois and Purdue, who basically are losing to everyone and anyone. This coming week can?t be any more obtuse, can it? Here?s a look at what?s ahead. Buckle up, just in case.

GAME OF THE WEEK: Michigan at Iowa, Sat., Feb. 8. Michigan State recently waded into Iowa City with a depleted roster and emerged with a victory. Can the Wolverines escape suffocating Carver-Hawkeye Arena, too? Michigan?s surprising loss at Indiana on Sunday was its first of the Big Ten season and tightened the race. The Wolverines are now tied with the Spartans with one league loss a piece; Iowa has three. So, you can see the importance of this game in what essentially a three-team race.

UPSET ALERT: Wisconsin at Illinois, Tues., Feb. 4. Yes, the Fighting Illini are slumping. But, they showed in a near-upset of Iowa on Saturday in Champaign that they still are a dangerous team that has talent. (By the way: How did Iowa almost blow a 21-point lead? Never mind.) The Badgers? struggles are well-documented, as their 3-0 Big Ten start has melted into a 4-5 Big Ten reality. This team is off the tracks. WAY off the tracks. Barring a complete meltdown (which I guess is possible), Wisconsin is playing to enhance a sagging NCAA resume. A loss here would sink the Badgers further down the NCAA seed pecking order-and cast even more doubt on a team that has lost five of its last six games. The lone victory in that span was at Purdue.

BIG WEEK: Michigan. The Wolverines are coming off a stunning loss at Indiana, which dropped them to 8-1 in the league and into a tie for the conference lead with Michigan State. Michigan will be put to the test this week with a visit from a surging Nebraska team that has won two in a row and three of four on Wednesday. That?s followed by a trip to Iowa on Sunday to play a Hawkeyes squad that needs to win to stay in the league title race. This will be a good chance for the Wolverines-who hold the tiebreaker over MSU by virtue of their head-to-head victory vs. the Spartans earlier this season—to reassert their supremacy in the Big Ten.

MATCHUP TO WATCH: It will be fun to watch Wisconsin?s Trae Jackson take on Michigan State?s Keith Appling on Sunday in Madison. The Spartans need to win to keep pace with Michigan atop the Big Ten standings. The Badgers are drowning in defeats, as the season is threatening to spiral out of control. Offense? Defense? It all has been an issue in Madison. These point guards need to control the tempo, limit turnovers and elevate the play of teammates. Whoever can impose their will on the other figures to lead their squad to victory.

DON?T OVERLOOK THIS MATCHUP: Indiana at Minnesota, Sat., Feb. 8. The Golden Gophers appear in most mock brackets. But they certainly could use a win like this to improve their NCAA standing. And Minnesota needs to protect its home court, where it already has taken down foes like Ohio State and Wisconsin but lost to Northwestern the last time it played in the Barn. The Hoosiers are coming off a big home triumph over Michigan and cling-barely–to NCAA tourney hopes. Can?t wait to watch Yogi Ferrell and DeAndre Mathieu do battle in the backcourt.

Northwestern: The Wildcats are white hot, winning five of their last seven games. Want more? NU has won three Big Ten road contests in a row for the first time since 1959-60, coming away with victories at Indiana, Wisconsin and Minnesota. Just incredible. The Wildcats have become a potent mix of personnel and coaching, as Chris Collins has found a defensive system that his players have embraced. Making this run all the more astounding is NU basically plays just six or seven guys. This team may reach the postseason for the first time since 2010-11, the last of three consecutive NIT appearances. Of course, the Wildcats never have gone to the NCAA tourney. And probably still won?t, unless they remain on their current streak or take the Big Ten tourney title.

Wisconsin. The Badgers are in a major funk. Not long ago, Wisconsin started a school-record 16-0 and ranked No. 3 in the nation. Now, the Badgers have lost five of the last six games. Making things even more vexing in Madison is the fact the Badgers are now vulnerable in the Kohl Center, which used to an impenetrable fortress. Alas, Wisconsin has lost three games in a row in its once-comfy confines, the first time that has happened since 1997-98. Also have to give quick mentions to Illinois and Purdue, which continue to sink. At one point earlier this season, the Fighting Illini actually were ranked. Look it up. But after opening Big Ten play with home wins over Indiana and Penn State, Illinois has dropped seven games in a row. It?s the program?s longest losing skein in 15 years. The Boilermakers have lost four in a row with no end in sight.