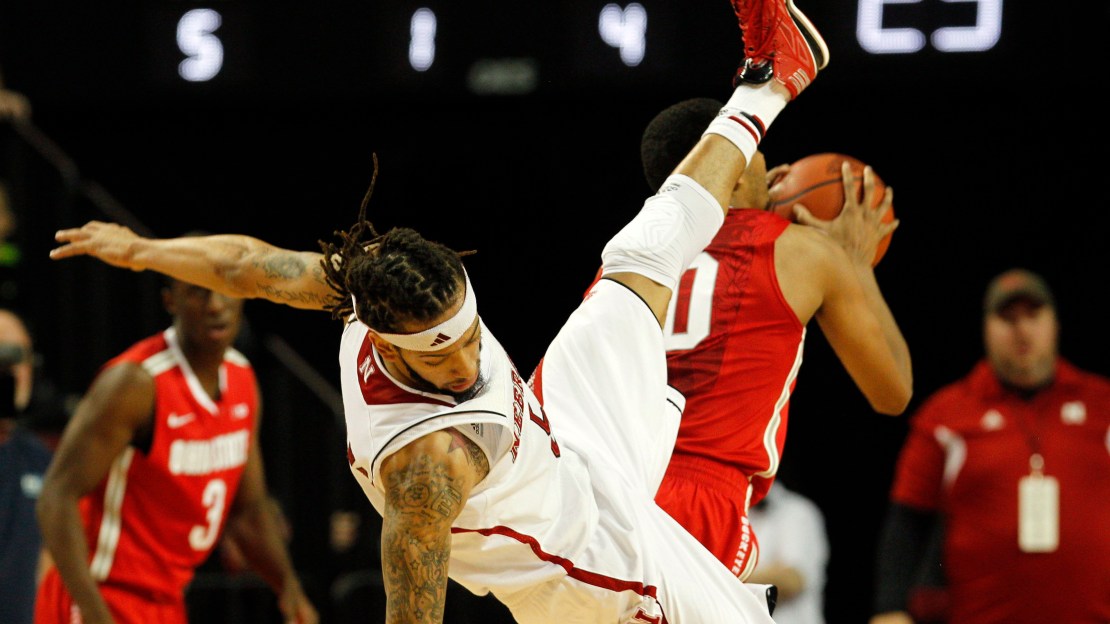 If Buckeyes fans aren?t feeling good today, we understand. That?s four losses in a row for Ohio State, which fell at Nebraska last night to a Cornhuskers? squad that was 0-4 in the Big Ten. This is OSU?s longest losing skid since 2007-08.

This was coming for Nebraska, which had come oh-so-close to beating Michigan at home earlier this year. And the Huskers could have won at Purdue, too. No doubt, this is the signature victory of the Tim Miles era.

This much is true about the Big Ten this season: There are no easy outs.

Nik Stauskas? dad says there?s a chance the Michigan sharpshooter could go pro. Yep. Why not? A 6-6 guy who can shoot? The NBA always needs that commodity. I?ll have a Q&A with Stauskas posted soon. Stay tuned.

For those Michigan fans who think A.D. Dave Brandon runs the football program, he?s here to tell you ?hogwash.?

So, Ohio State RB Carlos Hyde is going to skip the Senior Bowl. And some feel playing in it would have been a chance for Hyde to ?answer some questions.?

If I?m Hyde, I don?t sweat it. NFL teams have enough film of you to know what you can do. What on god?s green earth does Hyde have to prove in the Senior Bowl? Nothing. Just go the NFL Combine, Carlos. That?s all you need to do. Answer questions there and work out. We all know you can play.

And the hits just keep on coming for the Vanderbilt 2014 recruiting class, as one by one they continue to dump the Commodores for Penn State.

Much has been written and said about the remarkable depth of Iowa, which poses myriad issues for its opponents.

To wit, check this out from the Hawkeyes? win over Minnesota on Sunday: Iowa had five players score in double figures, eight grabbed at least three rebounds and nine played at least 10 minutes during Iowa?s 94-73 victory over Minnesota. Impressive, isn?t it? That depth will come in handy when the Hawkeyes take on Michigan on Wednesday night in a big, big, BIG game. And Iowa will do so as the No. 10 team in the nation.

Michigan State big man Adreian Payne is ?doubtful? for the No. 3 Spartans tilt with Indiana tonight. No biggie. MSU won?t need him to beat this listless Hoosiers team, which is the biggest disappointment in the Big Ten.

It will be the fourth game in a row Payne will have missed with a foot injury. My guess: Payne will play when Michigan comes to East Lansing on Saturday. Speaking of the Hoosiers: It?s stunning how poorly Indiana shoots. The Hoosiers seem to be a bunch of athletes. Can they play basketball?

Check out this video of Wisconsin coach Bo Ryan giving a lesson to his players on how to get over losses.

Unfortunately for Ryan, he?s had to do this more than he might have expected lately.

My take: It was worth it.

Nebraska closing out a close game. Difference between Penn State being 3-3 and 0-6 in conference.

My take: Yes, Penn State has had some close calls.

PSU now has 5 former Vandy commits in the class, bringing the total to 17. Plus 5 early enrollees from before. Is it signing day yet?

Last time #Buckeyes had losing streak longer than 4 was '97-98, when they lost 17 in a row in Jim O'Brien's first season as coach. #buckbk

My take: Jim O?Brien! I had forgotten about him! But remember: OSU soon was in the Final Four after that.

This losing streak is evidence that cupcake non-conference schedule has done #Buckeyes no favors. Needed to be tested, but weren't.

Miles, asked if OSU was the most talented team he?s beaten as a coach: ?I don?t know. I loved beating Valley City when I was at Mayville."

My take: Another reason why we love Tim Miles.

Amazing all those so adamant that Ohio State's PG was in another league than Appling are so silent this month. I miss the anger & venom.