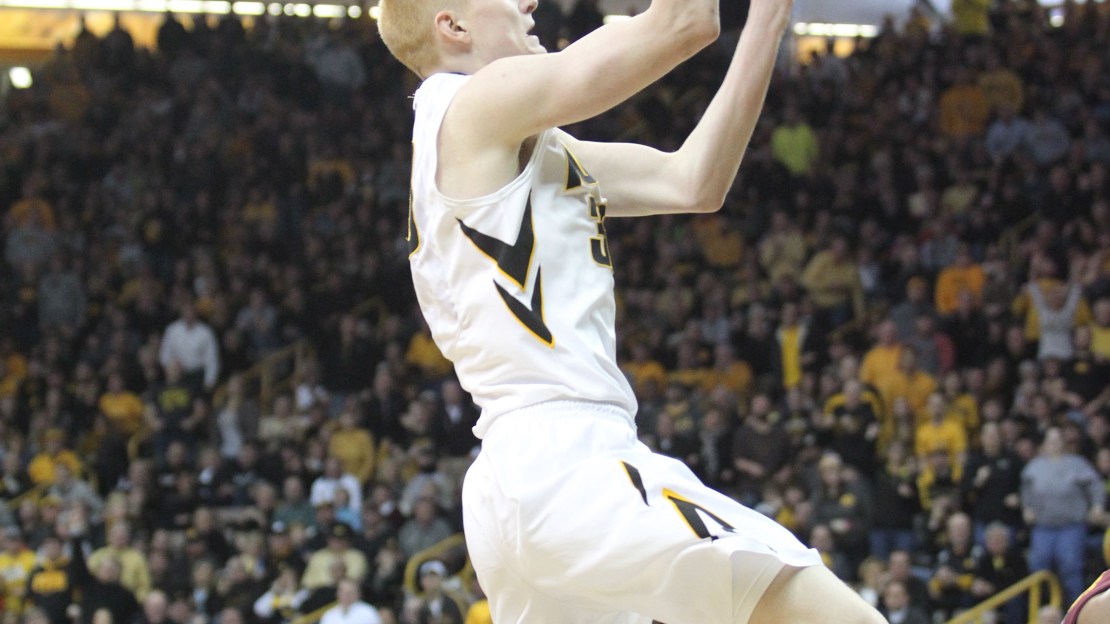 There is so much to like about Iowa hoops. Where to start after witnessing its win over Minnesota? Let?s count the ways with this look at its remarkable depth. If Devyn Marble and Aaron White aren?t doing damage, guys like Josh Oglesby, Zach McCabe and Gabe Olaseni are. It?s quite impressive, really. Minnesota actually led Iowa on Sunday at halftime, 43-41. It lost, 94-73. Stunning.

?You look at how they go deeper and deeper in their bench, and there?s no drop-off.?

How about a little football for you deep in the middle of hoops season? What are reasonable expectations for Ohio State next season? It?s a question posed by the gang at Cleveland.com. Could the Buckeyes be 8-0 as they enter the Michigan State game?

Here is what the first eight games look like:

Another dose of grid: The Big Ten?s coming East Division could be just what the conference needs to bolster its image.

No doubt, the division with Michigan State, Ohio State, Penn State and Michigan certainly will have a lot of heft and name-power. The continued rise of MSU and OSU is what?s really exciting. Michigan? Penn State? If they can come along, look out. The arrival of James Franklin in State College is intriguing and loaded with potential.

After a 16-0 start, it?s two losses in a row for Wisconsin, which entered the week ranked No. 3 in the nation. Now, this isn?t a top-10 team following a loss at Indiana and at home to Michigan, which played without Mitch McGary. The issue-surprisingly–for the Badgers: defense.

In the Big Ten, every foe knows your weaknesses. And they will attack them unrelentingly until you show you can stop it. For Wisconsin, that means stopping the dribble and defending the ball screen.

Tom Oates of Madison.com notes that Bo Ryan?s teams always improve during the season. But is Wisconsin too inexperienced inside to become one of Ryan?s typically tough defensive teams? Are the guards quick enough to match up with a player like Indiana?s Yogi Ferrell or big enough to stop 6-6 guards like Nik Stauskas? Hmmmm.

Speaking of Michigan, it rolls on with big man Mitch McGary out with a back injury. The key to the Wolverines? continued success? The play of Jon Horford and Jordan Morgan on the interior.

The Michigan blue-collar big men played a big role in the Wolverines? monster win at Wisconsin over the weekend, combing for 12 points and 15 rebounds. Double-double production like that basically offsets the absence of McGary. Michigan is turning into a fun and surprising story.

No Adreian Payne (who is out with a foot injury), no problem for Michigan State. The Spartans are finding ways to win regardless. The latest twist: Using Branden Dawson at center, which MSU did in a win at Illinois on Saturday.

Hey, give Tom Izzo credit for being innovative, looking for ways to keep MSU on a roll while dealing with injury/illness. It?s working, as the Spartans are off to their best 18-game start in school history.

"The (lineups are) really weird," Izzo said. "And that's why our offense looked weird at times."

And an interesting take on Payne?s absence from Graham Couch of the Lansing State Journal, who says Payne?s injury may be the best thing that happened to the Spartans. Really.

No doubt, Payne?s absence has forced other players-guys like Matt Costello and Denzel Valentine, among others–to amp up/hone their game. Those refined skills surely will prove valuable as the season marches on.

The Big Ten race seems to be firming up. And with it, so is the conference?s NCAA picture.

The league looks like a five-bid entity: Michigan State, Michigan, Iowa, Wisconsin, Ohio State. Minnesota and Indiana are sitting on the edge, with the Hoosiers threatening to teeter off it. The Big Ten?s best teams? I think they are MSU and Iowa.

These are not good times for Illinois. Nope. After a 2-0 start to the Big Ten season, the Fighting Illini have lost four in a row-losing at Wisconsin, at Northwestern, at home to Purdue, at home to Michigan State. The great Lore Tate says there was at least one positive to the Spartan defeat.

Down 35-25 at the break - having permitted 11 first-half layups - Illinois cut into the Spartans? 10-point lead. Yes, it was good to see an offensively challenged Illinois team show some life. But looming trips to Ohio State and Indiana could bring more misery to Illinois.

So, Philip Nelson has bolted Minnesota (and may land at Texas Tech). Here?s a look at the Golden Gophers? quarterback situation.

Indiana lost at home to Northwestern over the weekend. This isn?t good for the Hoosiers? NCAA hopes. And I thought IU was gonna be sparked by that win over Wisconsin. It will be fascinating to see where this team goes from here. Check out this video commentary from Zach Osterman of the Indianapolis Star.

Now 15 consecutive years with a Boilermaker in the Super Bowl. What an incredible run. #Purdue

My take: Bet you didn?t know that.

Regardless of what happens here, for the 43rd time in the Super Bowl's 48-year history there will be at least one #PSU alum on the roster.

Michigan and Iowa this week should be a lot of fun to watch. Over/Under set at 4,346 points (approximately).

My take: Gonna be a fun game with a lot of points. Can?t wait!

Illinois coach Jon Groce asked about some of the calls that got him upset: "I thought they were terrific."

My take: Way to bite your tongue, Coach.

I still believe that 2011 Wisconsin team with Russell Wilson was good enough to play with anybody. They just got some bad bounces.

My take: Should have won the Rose Bowl over Oregon.

Kansas scored as many points in one half against Oklahoma State as Indiana scored in two halves against Northwestern today. #iubb

My take: The IU offense is a shell of what it was last season.

Pitino: "They've done a great job of recruiting. You look at how they go deeper and deeper into their bench, and there?s no drop off."

My take: Yes, Iowa is loaded.