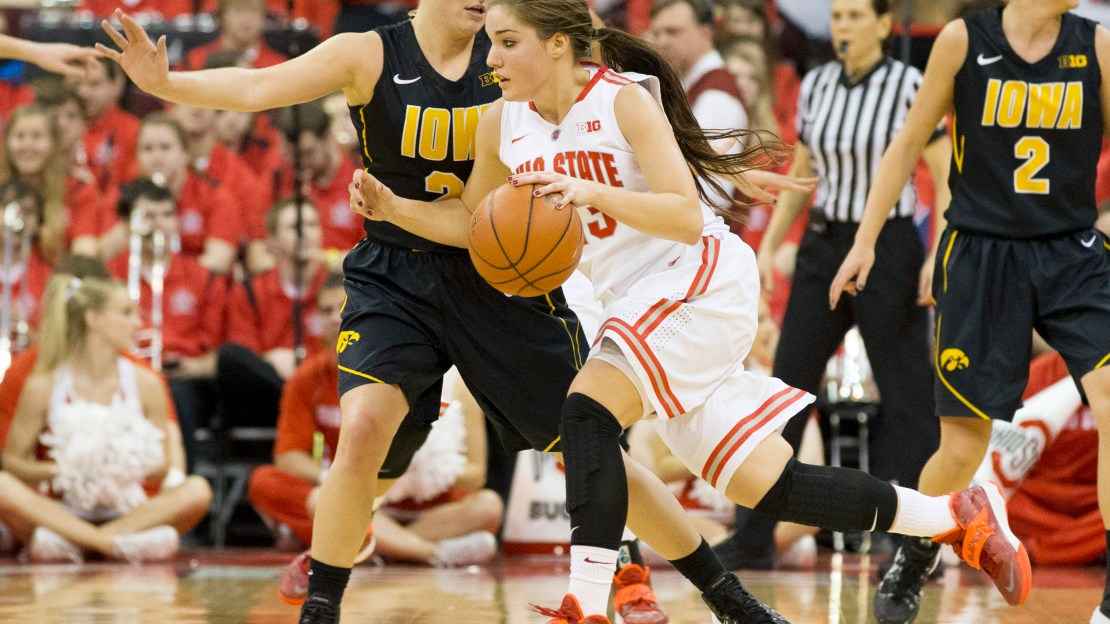 There were four Big Ten women's basketball games on the docket today. Indiana kicked off the action with an 83-78 victory over Minnesota, while Iowa followed with an 81-74 win over Ohio State. Currently playing: No. 16 Penn State vs. Michigan State; No. 18 Nebraska vs. No. 22 Purdue.

Catch up on all the scores, stats, recaps and select video highlights in this post.

Freshman Ally Disterhoft turned her first collegiate start into her first double-double Sunday as the University of Iowa snapped an 11-game losing streak at Ohio State, 81-74, in Value City Arena. Disterhoft scored 24 points and grabbed 10 rebounds as the Hawkeyes improved to 15-5 overall, 3-3 in the Big Ten Conference. She was 12-of-12 from the free throw line and made six in a row during the final 28 seconds.

(AP) Whitney Bays got a crucial offensive rebound and then made the game-winning put-back as No. 22 Purdue edged No. 18 Nebraska 77-75 on Sunday. Purdue (13-5, 3-3 Big Ten) led most of the second half but had to scramble to hold off Nebraska, which tied the game at 75 on a 10-3 run capped by a pair of Rachel Theriot free throws with 29 seconds to play. The Boilermakers got the ball to April Wilson, who missed her shot on a drive to the hoop, but Bays was there to grab the rebound and sink the game-winning layup with a second to go.

The Indiana women's basketball team outlasted Minnesota in an overtime thriller in Assembly Hall on Sunday afternoon, 83-78. The game saw 18 lead changes throughout the afternoon as IU's freshmen combined to score 74 points in the victory. The Hoosiers were led by the freshman duo of Larryn Brooks and Taylor Agler who scored 25 points and 20 points, respectively. Brooks finished with a double-double as she dished for a career-best 10 assists.