One look back at Big Ten's best BCS era teams 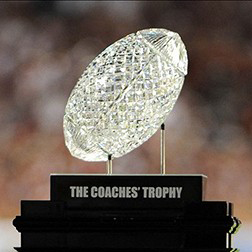 The BCS era is over, and to me that is a very good thing. The era ran 16 seasons stretching from 1998-2013. As a way to celebrate the end of the BCS and with an eye on the first college football playoff after next season, I present to you my 10 best Big Ten teams of the BCS era.

Agree? Disagree? State your case in the comments section below or drop me a note for my mailbag. And if you want a sneak peek at 2014 preseason rankings, I wrote about one I found a little while ago, but it's still to early to look ahead. Instead, let's look back with my list.

No one saw the greatness coming in Jim Tressel?s second Buckeye team, as OSU was coming off a 7-5 season. Was Craig Krenzel REALLY a national championship-caliber quarterback? Hey, he did the job-with a huge assist from mercurial running back Maurice Clarett and a monster defense paced by cornerback Chris Gamble and safety Mike Doss. This team mastered the art of winning the close game-13-7 vs. Penn State; 10-6 vs. Purdue; 23-16 vs. Illinois in OT; 14-9 vs. Michigan. And no tilt was closer than the 31-24 double OT national championship game triumph vs. a heavily favored Miami (Fla.) team in the Fiesta Bowl. No Big Ten squad has won it all since.

This recently-minted Spartans squad was one of the greatest in Big Ten history. Yes, you read that correctly. MSU won every Big Ten game by double-digits, a feat never before accomplished in the conference in the eight-league-game era. Paced by Thorpe Award winner Darqueze Dennard, the defense was dominating, and the offense morphed from pathetic to pretty potent for a 13-1 team that finished No. 3 in the nation.

This was a boffo squad that began the season ranked No. 1 and had national championship material. Joe Germaine quarterbacked the squad to an 11-1 mark that culminated with a win over Texas A&M in the Sugar Bowl and a No. 2 ranking. The team featured three No. 1 picks in the 1999 NFL draft in WR David Boston; DB Antoine Winfield; LB Andy Katzenmoyer. The only blemish was a 28-24 loss in Columbus to a Nick Saban-coached Michigan State team on Nov. 7 when OSU was ranked No. 1. Mention of the game to this day elicits groans from Buckeye faithful.

Led by Heisman Trophy winning quarterback Troy Smith, the Buckeyes went wire-to-wire in the regular season at No. 1, capping it with a victory in the iconic No. 1 vs. No. 2 showdown vs. Michigan to finish 12-0 and earn a spot in the BCS title game. Alas, the Buckeyes were dumped by Tim Tebow and Florida in the BCS title game. This was a star-studded roster with players like Ted Ginn Jr., Anthony Gonzalez, Malcolm Jenkins, James Laurinaitis and Nick Mangold, all of whom were first-round draft choices.

This team often gets engulfed by the shadow of the Ohio State squad that won the national title in the same season. But make no mistake about it: This Hawkeyes bunch was special, capping an 11-2 season (8-0 Big Ten) with an Orange Bowl loss to mighty USC. Not bad for a team that began the season unranked. Quarterback Brad Banks was the Heisman runner-up. Other studs were tight end Dallas Clark, kicker Nate Kaeding, guard Eric Steinbach and center Bruce Nelson.

Coming off a BCS title game loss the previous season, Ohio State opened the 2007 season ranked No. 10 led by players like James Laurinaitis, Vernon Gholston, Marcus Freeman and Beanie Wells. The wins kept piling up, as the Buckeyes opened 10-0 and reached No. 1. Then came a stunning 28-21 loss at home to Illinois that looked to trash Ohio State?s BCS title game hopes. But some crazy upsets on the last weekend of the season opened the door for the Buckeyes to reach the championship game for a second season in succession. Alas, Ohio State fell to LSU in the title game.

A powerful Bret Bielema-coached squad that was led by John Clay, Lance Kendricks, J.J. Watt and Gabe Carimi, the Badgers lost just one regular-season game as they fell 34-24 at Michigan State on Oct. 2. Wisconsin closed with seven wins before advancing to the Rose Bowl to play No. 3 TCU. The No. 4 Badgers got tripped, 21-19, sullying an otherwise stellar 12-1 season.

This team was fueled by big Ron Dayne, who ran for 1,834 yards en route to becoming the all-time leading rusher in major college history and winning the Heisman Trophy. The Badgers finished 10-2 overall and 7-1 in Big Ten, winning their last eight games after opening the season 2-2. Wisconsin finished No. 4 in the nation after topping Stanford in the Rose Bowl.

[ MORE: Watch the full 2000 Rose Bowl with Wisconsin vs. Stanford on BTN2Go ]

A talented Badger club led by Big Ten Defensive Player of the Year Tom Burke, Ron Dayne, Aaron Gibson and Jamar Fletcher, Wisconsin surprised by running to an 11-1 season that was capped by a Rose Bowl triumph vs. UCLA. The Badgers opened 9-0 and rose to No. 8 in the nation before a 27-10 loss at Michigan. Craig James infamously called Wisconsin the ?worst team to ever play in the Rose Bowl.? After knocking off the Bruins, Barry Alvarez said: "Well, I know we're at least the second worst.? Touche. Wisconsin ranked No. 5 at season?s end.

This squad went 11-2 overall and 7-1 in the Big Ten to share the Big Ten title with Wisconsin. Things could have been even better if not for a loss to Alabama in the Capital One Bowl. Remember that the lone regular-season loss was at Iowa. Still, MSU finished No. 14 after reaching as high as No. 5 with Kirk Cousins and Greg Jones leading the way. This was the first of a current four-season run of excellence for Mark Dantonio's program that has seen the Spartans win two league titles, post a double-digit victory total three times and win a Rose Bowl.