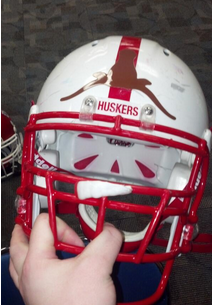 No one will argue that Nebraska has been an outstanding addition to the Big Ten conference since joining back in 2011. But don't think for a second that Huskers players have completely dismissed some of their old Big 12 rivalries.

Nebraska's Jeremiah Sirles is one of 14 Big Ten players participating in Saturday's East-West Shrine Game in St. Petersburg, Fla. The senior offensive tackle looks to be having a great time as he posted a photo on twitter earlier today of his helmet with an upside down Texas logo.

New addition to the helmet for the game #hornsdown pic.twitter.com/dM3yGewxVL

As you can see, Sirles closes the tweet by using the hashtag, #hornsdown.

Perhaps the best part of this whole thing is some of the fan reactions Sirles received after posting this photo on his twitter account.

@Sirles71_HSKR I hope you were wearing gloves when you touched that thing!

@Sirles71_HSKR Not good enough to have even started a rivalry in the small ten? Did you ever beat Texas?