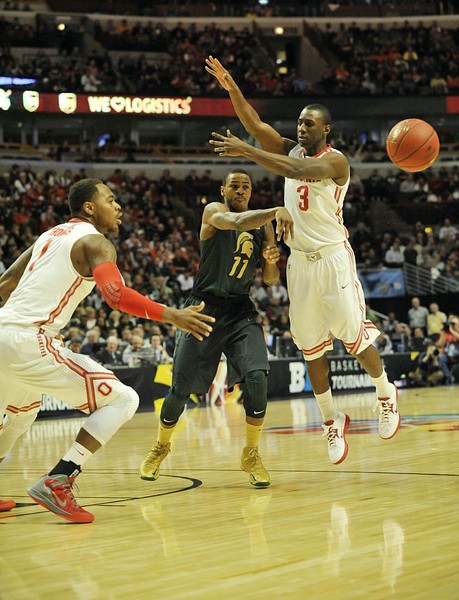 The Big Ten currently possesses three of the top five teams in the nation. Two of them will collide tonight in East Lansing.

No. 5 Michigan State (13-1, 2-0) hosts undefeated and No. 3 Ohio State (15-0, 2-0) in the programs' first meeting as top five opponents, and the winner will remain perfect in the conference. This already marks the second top-five matchup of the season for the Spartans, who defeated then-No. 1 Kentucky on November 12.

[ MORE: Big Ten Whiteboard: Get ready for the week ahead ]

This matchup is highlighted by Michigan State's high-powered offense against Ohio State's stingy defense. The Spartans enter second in the Big Ten in scoring, averaging 82.6 points and shooting a Big Ten-leading 48.6 percent from the field.

They will face a Buckeyes defense that allows a conference-low 54.9 points per game and that ranks second in field goal shooting defense at just under 37 percent from the field.

Tom Izzo's Spartans have been at their best when out on the break. Acording to Synergy Sports, 25.9 percent of Michigan State's plays this season have come in transition, by far the most in the Big Ten and higher than its rate of 18 percent last season. That has led to the Spartans totaling 316 transition points this season, second behind only Iowa (326) in the conference.

While Michigan State has looked to push the ball this season, limiting transition opportunities has been a focus on the defensive end for Thad Matta's squad. Ohio State's opponents are in transition just 11.5 percent of the time, and the Buckeyes have allowed just 103 total points this season in that play type, both bests in the conference.

Slowing down its opponents transition game and forcing it to run half-court sets is what Ohio State thrives on. The Buckeyes are one of the best defensive teams in the half court, ranking first in the Big Ten and tied for third in the nation at 0.70 points per play allowed in that play type. Ohio State's opponents are turning the ball over on 19.2 percent of its total half-court possessions, also best in the Big Ten.

The Buckeyes will look to build off last season's success against the Spartans, winning two of the three meetings, including eliminating Michigan State in the semifinals on their way to the Big Ten Tournament title. However, neither team has been able to gain an edge in games played in East Lansing, as they have split the last 6 meetings at the Breslin Center.