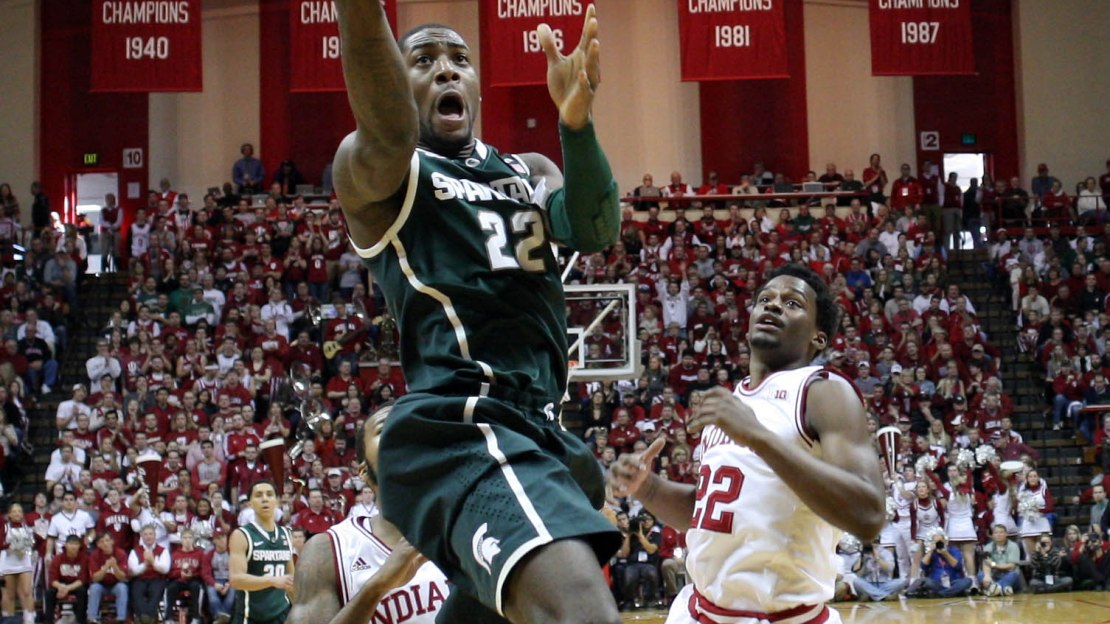 Illinois, No. 5 Michigan State and No. 3 Ohio State all improved to 2-0 in Big Ten play with convincing victories Saturday. The Illini took down Penn State, 75-55, the Spartans won at Indiana, 73-56, and the Buckeyes rolled past Nebraska, 84-53.

Catch up on all the scores, stats and video highlights in this post.

ILLINOIS 75, PENN STATE 55 | RECAP | BOX | PLAY-BY-PLAY
(AP) Rayvonte Rice scored 15 points to lead four Illinois players in double figures as the Illini defeated Penn State 75-55 on Saturday. Illinois (13-2, 2-0) remained in a first-place tie in the Big Ten following a pair of home wins. Penn State (9-6, 0-2) has dropped five of eight after a 6-1 start. Penn State's D.J. Newbill was ejected with 8:38 to play after a retaliatory push to the back of Illinois freshman Kendrick Nunn's head. Newbill, in a virtual dead-heat with Illinois' Rice for the Big Ten scoring lead entering the game, scored just seven on 2-of-8 shooting.

VIDEO: Tempers just flared in the #PennState at #Illini game, and it resulted in an ejection. WATCH scuffle – http://t.co/ECYH47C7ot

MICHIGAN STATE 73, INDIANA 56 | RECAP | BOX | PLAY-BY-PLAY
(AP) Gary Harris scored 26 points and No. 5 Michigan State beat Indiana 73-56 on Saturday. Harris had 17 points in the first half for the Spartans (13-1, 2-0 Big Ten) and he had a 5-point play midway through the second half. Michigan State turned 13 Indiana turnovers into 20 points. Branden Dawson added 13 points for the Spartans. Yogi Ferrell led Indiana with 14 points while Sheehey added 13.

WATCH: Branden Dawson soars in for a HUGE one-handed slam and let's the camera man know it! @MSU_Basketball – http://t.co/E5oLLCG3Nm

OHIO STATE 84, NEBRASKA 53 | RECAP | BOX | PLAY-BY-PLAY
(AP) LaQuinton Ross scored 11 points, including two 3-pointers as No. 3 Ohio State pulled away, leading the Buckeyes to an 84-53 victory over Nebraska on Saturday. It was a last tuneup before the biggest test of the season for the Buckeyes (15-0, 2-0 Big Ten), at No. 5 Michigan State on Tuesday night. Amedeo Della Valley had 15 points, Marc Loving scored a career-high 13, Shannon Scott also had 13 and Amir Williams chipped in with 10 points for Ohio State.

INSTANT HIGHLIGHT: Check out the unselfishness on this @OhioStateHoops fastbreak. Love it! WATCH – http://t.co/fpJkQZaZEM