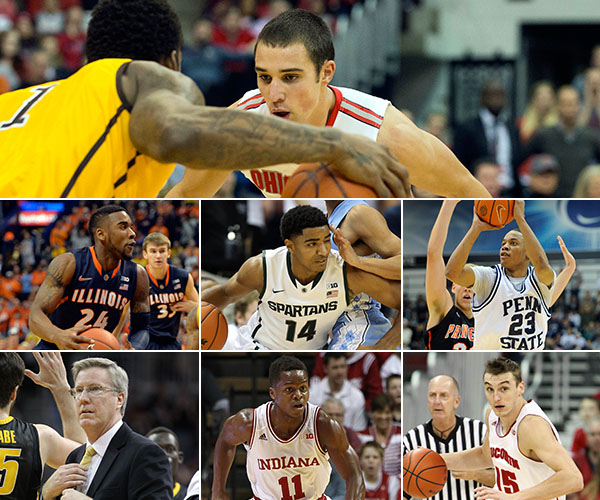 The conference hoops season tips off New Year's Eve. I hope you're excited, too! Before the games really start to count, here are 14 (random) thoughts I have entering 2014. For the record, no, these thoughts are in no particular order.

1. As many as three Big Ten teams could hold the No. 1 ranking this season. Michigan State already has been No. 1, while No. 3 Ohio State and No. 4 Wisconsin could also get their time atop the polls. Both the Buckeyes and Badgers are undefeated, and if they continue to win in the nation's best conference, it's only a matter of time before at least one of them gets to No. 1. That's assuming, of course, some team takes down No. 1 Arizona.

2. Forget offense, Ohio State's defense is good enough to carry it to a Big Ten crown. No doubt, a more reliable and consistent scoring attack would help. But, with four elite defenders in its starting lineup, I'm not so sure Ohio State needs a consistent 20-point scorer to challenge for Big Ten supremacy. This is a team that is allowing 53 points per game and held Marquette to 35 points in Milwaukee.

3. I envy and pity Fran McCaffery. As BTN analyst Stephen Bardo recently said, Iowa is so deep that it has two of everything. That's both a blessing and a disguise. It's wonderful to be able to have a second unit that rivals the opponent's starting 5 and to boast so much depth that players are fresh throughout the season, but it's not easy to find minutes for everyone, carve out roles and keep every player content about playing time. The good news: McCaffery has an unselfish team.

4. Wisconsin has the team and schedule to run away with the Big Ten title. The Badgers enter Big Ten play 13-0. They're a talented bunch that can score better than previous Bo Ryan teams and can still defend like a Ryan-led team. Add that to a conference schedule that includes only one date with other likely Big Ten title contenders Michigan State and Ohio State, both of which are at the Kohl Center, and it wouldn't be a surprise if the Badgers win the conference by multiple games.

5. Indiana is going to be a blast to watch. The Hoosiers are loaded with exciting young athletes. That said, they are just as likely to commit a head-scratching turnover (Troy Williams has had a handful) as they are to wow fans with yet another highlight-reel play. If Tom Crean can get his talented freshmen to avoid the "freshman mistakes," the Hoosiers could show a lot of improvement. Either way, Indiana will be fun to watch.

[ MORE: Get our noncon team reports, all in 140 characters or less ]

6. Transfers are going to play a big role this year. This could be the year of the transfers, with guys like Illinois' Rayvonte Rice (Drake), Iowa's Jarrod Uthoff (Wisconsin), Nebraska's Terran Petteway (Texas Tech) and Penn State's John Johnson (Pittsburgh), among others, carving out significant roles. Rice, Uthoff and Petteway delighted during nonconference play, while Johnson, who just became eligible, scored a team-high 20 points in his debut Dec. 22.

7. When did Austin Hollins become Rodney Williams Part II? Williams was one of the Big Ten's elite dunkers throughout his tenure in Minneapolis, and now Hollins is right up there with Sam Thompson when it comes to the conference's best high-flyers. It's getting to the point where the senior almost does it on a nightly basis. I didn't see that happening. If you did, congrats!

INSTANT HIGHLIGHT: How high is Austin Hollins on the dunk? High enough & then some. #orvillemoment @GopherBBall – http://t.co/uyyV17AWFz

8. Will A.J. Hammons put it all together? Few Big Ten players have a higher ceiling than the talented Purdue big man. At the same time, few Big Ten players are more frustrating than the talented Purdue big man. Hammons is an elite shot-blocker – his 3.8 blocks per game lead the Big Ten – however he routinely finds himself in foul trouble and still hasn't developed much of an offensive game. The fouls can be addressed by not trying to block EVERY shot and the offense is something that can come with more effort and more foul-free minutes. Just ask Indiana.

9. The bottom of the Big Ten will be much better than last year. Look, Northwestern is going to struggle and may have a hard time tallying a conference win. But, Nebraska and Penn State are far improved from 2012-13. While neither is going to challenge for the Big Ten crown, either could make its way into the top half of the conference standings with a little luck. Both teams are more talented, deeper and more experienced than they were a season ago. So, don't sleep on the Huskers or Nittany Lions.

10. It wouldn't be a surprise if either reigning Big Ten champ Indiana or last year's national runner-up Michigan doesn't make the NCAA tourney. Why? Let's start with the Hoosiers. Indiana enters the loaded Big Ten without a single "good" win. There are plenty of "good" wins to be had in Big Ten play, however it's no certainty Indiana will be able to card enough of them. As for the Wolverines, they already have four losses, thanks to a grueling schedule, and are now without preseason All-American Mitch McGary, who will undergo back surgery.

11. Can Michigan State kick the injury bug? While none of the injuries has been serious, Matt Costello, Gary Harris, Branden Dawson and Travis Trice all have missed time due to various bumps and bruises. Stars Keith Appling and Adreian Payne also went down vs. North Carolina, but neither missed a game. When 100 percent healthy, the Spartans are as dangerous as any team in the nation, let alone the Big Ten.

12. Patrick Chambers isn't crazy, after all. It's a year late, but Penn State does have one of the nation's elite backcourts, in Tim Frazier and D.J. Newbill, as Chambers boldly predicted prior to last season. It may have happened last year, too, had Frazier not suffered the early season-ending Achilles injury. Back to the present, though: Frazier is his old self again, and his return has helped Newbill become one of the conference's better and more efficient off-guards.

INSTANT HIGHLIGHT: Congrats to @PennStateMBB's Tim Frazier on assist No. 500. What an assist it was, too! WATCH – http://t.co/2hQtL6q7dD

13. Don't forget about Drew Crawford, people! Consider this: Crawford has put together quite the career in Evanston, but did you know he's averaging career highs in scoring (16.4), rebounds (7.8) and blocks (0.8)? People are likely going to forget about him when it comes to the Big Ten's top players, but his name belongs in the discussion.

14. Sam Thompson better not get another inbound alley-oop. By now, every Big Ten coach and player should know what Ohio State likes to do on inbound plays under their own basket. I've seen it so many times, I can see it when I close my eyes. There's Aaron Craft taking the inbound, and, wait for it, there's Thompson darting to the lane and leaping to slam home the pass. Enough! As much as I love to watch the play, it shouldn't happen again. This play must be in bold on every team's scouting report. There's no excuse for giving Thompson any room to roam in this situation. And yet, teams still let him do whatever he wants.