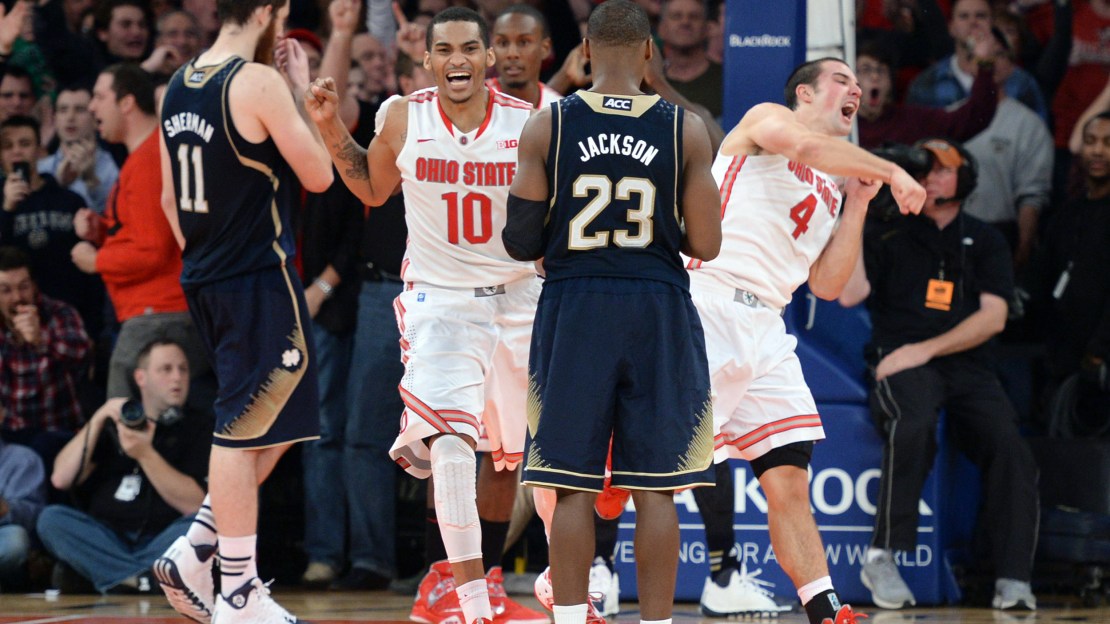 There were five Big Ten hoops games on Saturday and the Big Ten made a huge statement, going a perfect 5-0 on the day. No. 5 Michigan State took down Texas in Austin, Illinois sent Missouri to its first loss, and No. 2 Ohio State made an incredible comeback to drop Notre Dame. Nebraska followed with a blowout win over The Citadel, while Michigan closed out the evening with an impressive victory over Stanford.

Catch up on all the day's scores and stats in this post.

ILLINOIS 65, MISSOURI 64 | RECAP | BOX | PLAY-BY-PLAY
(AP) Tracy Abrams scored a season-best 22 points and made two free throws with 4.6 seconds to lift Illinois over No. 23 Missouri 65-64 Saturday in the annual Braggin' Rights game. Rayvonte Rice added 14 points for Illinois (9-2), which snapped a four-game losing streak in the 33rd renewal of the annual neutral-court matchup. Jordan Clarkson had 25 points and Earnest Ross added 13 for Missouri (10-1), which entered the game as the lone unbeaten school in the SEC.

MICHIGAN 68, STANFORD 65 | RECAP | BOX | PLAY-BY-PLAY
(AP) Nik Stauskas scored 19 points, and made 2 crucial free throws with 9 seconds left, leading Michigan to a 68-65 win over Stanford at the Barclays Center on Saturday night. Forward Glenn Robinson III added 17 for the Wolverines (7-4), who took care of the basketball all night. They turned it over only eight times.

MICHIGAN STATE 92, TEXAS 78 | RECAP | BOX | PLAY-BY-PLAY
(AP) Adreian Payne scored a career-high 32 points and No. 5 Michigan State dominated the final 11 minutes of a 92-78 victory over Texas on Saturday. The Spartans (10-1) led for only 56 seconds in the first half as Texas (10-2) controlled the game early. Michigan State used a 9-2 run to take a 52-50 lead about halfway through the second half. Following two quick buckets by Jonathan Holmes, six Spartans scored during a 14-2 run that put the game away.

NEBRASKA 77, CITADEL 62 | RECAP | BOX | PLAY-BY-PLAY
(AP) Terran Petteway had 27 points, including a mid-second half dunk that gave Nebraska the lead for good as the Huskers pulled away late to down The Citadel 77-62 Saturday. Nebraska (8-3) trailed The Citadel (4-9) 51-49 when Leslee Smith had a game-tying dunk with 10:58 left. Petteway then stole a fumbled Bulldog dribble at the Bulldog free throw line and went the length of the court for a dunk that started a 13-7 Husker run.

OH MY! Check out Nebraska's Terran Petteway hit a 25-foot buzzer beater before the half! @Huskerhoops. WATCH – http://t.co/rrl8CnDazi

OHIO STATE 64, NOTRE DAME 61 | RECAP | BOX | PLAY-BY-PLAY
(AP) Lenzelle Smith Jr. scored seven of his nine points in the final 33 seconds and No. 3 Ohio State rallied from an eight-point deficit with 1:54 to play to beat Notre Dame 64-61 on Saturday night in the BlackRock Gotham Classic at Madison Square Garden. The Buckeyes (12-0), who had a woeful second half from the field, closed the game on a 14-3 run and Smith was the key to the closing spurt.