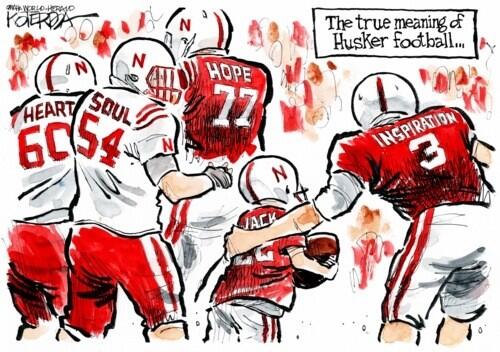 What was your favorite 2013 BTN moment? There was no shortage of incredible, memorable and emotional moments on our air, so the BTN.com team decided to rank the top 10. Did we miss one? Let us know in the comment box at the bottom of the post.

10. Nebraska fans storm court in Devaney finale
A win over an unranked team rarely, if ever, warrants a court storming. There's no shame in doing it, however, when a team pulls off an unexpected win in the final game of its home gym's history. Nebraska men's basketball fans – a starved fanbase – didn't need to apologize for storming the court and celebrating after the Huskers' 54-52 win over Minnesota to shut down the Devaney Center, the team's home since 1977.

9. Traevon Jackson and dad, Jim Jackson, share special moment at Big Ten tourney
Few Big Ten athletes showed more improvement in 2013 than Wisconsin guard Traevon Jackson. The son of Jim Jackson, the former Big Ten star and current BTN analyst, Traevon went from a complete non-factor to Bo Ryan's clutch, big-shot making point guard. In a season full of game-winning shots, though, our favorite Traevon moment came seconds after he led Wisconsin past Big Ten champ Indiana in the Big Ten tourney. That's when, before he took his to seat to join BTN at its courtside set, the younger Jackson and his proud dad shared this special moment.

8. Indiana hoops raises first outright Big Ten championship banner since 1993
The last time Indiana claimed the outright Big Ten men's basketball title, in 1993, every Hoosier either was in diapers or not yet born. Twenty years later, Indiana finally stood on top of the Big Ten by itself. And it did in a season in which the Big Ten was as competitive and deep as any in recent history. It helped having future NBA lottery picks Victor Oladipo and Cody Zeller, not to mention 1,000-point scorers Jordan Hulls and Christian Watford. The Hoosiers raised the much-anticipated banner at this year's Hoosier Hysteria.

7. Winless Penn State upsets No. 4 Michigan
In perhaps the biggest upset of the 2013 calendar year, 0-14 Penn State stunned No. 4 and eventual national runner-up Michigan, 84-78, at the Bryce Jordan Center. Jermaine Marshall fueled the upset with a game-high 25 points, and D.J. Newbill and Ross Travis scored 17 and 15, respectively. The win came 10 days after the Nittany Lions gave the Wolverines everything they could handle in a closer-than-the-score-indicated 10-point defeat in Ann Arbor.

6. Jeremy Gallon's record-setting game vs. Indiana
For some, 369 yards receiving would qualify as a pretty good season. For Jeremy Gallon, it was an unforgettable record-setting day. In an effort that Michigan fans won't soon forget, Gallon torched Indiana for a Big Ten-record 369 yards, on a ridiculous 14 receptions, to help Michigan hold off Indiana in a 63-47 shootout. Lost in Gallon's big day was QB Devin Gardner setting school records with 584 yards of offense and 503 yards passing.

5. Michigan's hurried last-second field goal forces overtime at Northwestern
You know it has to be a special play for a field goal to be included in an end-of-the-year top 10 list, let alone nab the No. 5 spot. Well, Michigan's hurried last-second field goal at Northwestern was something you may never see again. Seriously, when was the last time you saw the holder rush onto the field and slide into position to take the snap? That's what Drew Dileo did on this game-tying attempt, and Brendan Gibbons booted the ball right through the uprights to force overtime. Michigan won 27-17 in triple overtime.

INSTANT HIGHLIGHT: Prediction: You haven't seen a FG like the one @umichfootball just made. #orvillemoment WATCH – http://t.co/m0s0KgoQq0

4. Mark Dantonio revels in Big Ten Championship Game victory
For as well as the 2013 season turned out for Michigan State, it sure didn't get off to the rosiest of starts. There were quarterback questions – a lot of them! – just about every week the first month or so of the season. Soon enough, Connor Cook made everyone forget about the offensive woes, and the Spartans turned into one of the nation's elite teams on their way to winning the Big Ten and advancing to their first Rose Bowl since the 1987 season. Mark Dantonio was stoked following the Big Ten title game victory, and his BTN postgame interview was must-see stuff.

WATCH: When a very happy Mark Dantonio calls for a championship hat, you get him a hat. #orvillemoment – http://t.co/ugNKmx6E6r

3. The basketball world meets Adreian Payne's No. 1 fan
It was hard enough not to respect Adreian Payne and his all-around game before we were exposed to his heartwarming friendship with Lacey Holsworth, a seven-year-old Michigan State fan with neuroblastoma, a cancer that most commonly affects children age 5 or younger. After seeing his genuine bond with Holsworth – "a miracle in the making," as her father calls her – on "The Journey," it's impossible not to respect the Michigan State star.

2. Nebraska uses last-second Hail Mary to stun Northwestern
With the clock winding down and trailing 24-21, Nebraska had no choice but to go for a last-second Hail Mary vs. Northwestern. Everybody knew what was coming, and, somehow, third-string quarterback Ron Kellogg III got enough on the heave for it to reach the end zone, where it deflected off a Northwestern defender and landed in Jordan Westerkamp's waiting arms. Game over. Nebraska wins. And what a scene it was at Memorial Stadium.

1. Jack Hoffman, 7, runs for touchdown in Nebraska Red-White Game
We all know the story by now. Hoffman, the young Nebraska fans who's battling brain cancer, delighted the Memorial Stadium faithful – and the rest of the sports world – with his memorable and emotional touchdown run in the annual Nebraska Red-White Game. Best part of it all, the Huskers seemed to enjoy the moment even more than Hoffman, who was dressed in a Nebraska uniform for the big day. And, of course, Hoffman immediately became a celebrity.