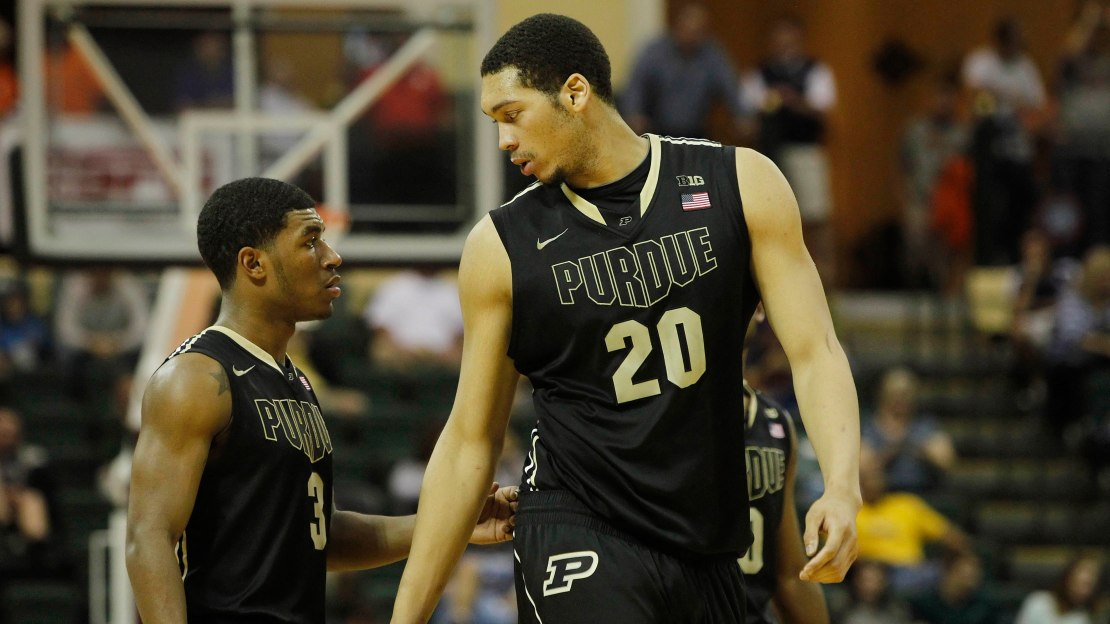 This was a big weekend for the middle of the Big Ten. So far this season, there have been two teams that clearly look a cut above the rest-Ohio State and Wisconsin-and then there are a lot of teams that haven't hit their upside. Many of those teams were tested this weekend, and every one of them failed.

The action started on Friday, where Iowa established the theme of the weekend-get a lead, and blow it late. The Hawkeyes had a 10-point lead over a tough Cyclones team in the first half, but this was a back-and-forth affair in the second stanza. Still, Iowa had a five-point lead with 1:29 left to play.

Then the team just could not hit a shot. Down the stretch, the Hawkeyes missed their final three field goal attempts and four free-throw attempts (even worse was that one of those was the front end of a one-and-one). Meanwhile, ISU didn't miss a shot from that point on. Of course, the only shots that Iowa State attempted were six free throws and a layup. In that respect, this was more of a failing of Iowa's defense than its offense. Iowa is normally a solid shooting team, and converts 74 percent of its free-throw attempts. So this is not a team that is chronically cold. But the Hawkeyes are a little too prone to defensive breakdowns for a team that wants to compete for the conference title. And a good offensive team like Iowa State exploited that down the stretch.

The Big Ten's Indiana contingent did not fare well in the annual Crossroads Classic. Starting first with the Hoosiers, at least I can't accuse them of choking away a lead-because they never had one. Indiana normally relies on getting to the free-throw line to power its offense, but against the foul-adverse Irish, Tom Crean's group could only muster 16 attempts against 43 two-point attempts. Even so, an improved perimeter attack (7-for-20 on 3-point attempts) resulted in an offense that scored over a point per possession.

That means Indiana's issues were mostly on defense. In particular, the Hoosiers couldn't stop fouling Notre Dame, who attempted 30 free throws-against just 36 two-point attempts. This was especially strange because getting to the line is not exactly a strength for Notre Dame this (or any) season.

Will Sheehey tied a career-high with 22 points, on 9-of-15 shooting, but he also had five turnovers. Noah Vonleh struggled with foul trouble, and was only able to score eight points in 21 minutes.

So is Indiana any good? I guess it depends on whether Vonleh is staying out of foul trouble. When he's on the floor, he's one of the best players in the Big Ten, and probably the best rebounder in the conference. But when he's on the bench, the team turns into Yogi Ferrell and the Pips. And while Ferrell is a very good player, at 6-0 (a generous listing if there ever was one), his offensive attack is somewhat one-dimensional.

I guess this is all to say that Indiana is a solid team, but one with some glaring holes. And that's what makes the non-conference performance so disappointing, because the Hoosiers will have zero quality wins entering Big Ten play.

The same goes for a Purdue team that continues to be less than the sum of its parts. A late flurry made the final margin respectable, but Butler had a 16-point lead with a minute-and-a-half remaining in its win over the Boilers. This game turned into a blowout with about five minutes remaining.

And I can understand why Matt Painter might be frustrated, because he still doesn't have anything resembling a firm rotation at this point. But that needs to change, because playing 11 guys in the rotation-as Painter did on Saturday-isn't working.

@bigtengeeks he needs to figures out his rotation, playing 11 guys isn't working,

I get that Travis Carroll is a senior and all of that. But in his three-plus seasons, he's established that he's not a scoring threat and a poor defensive rebounder. The best part about his game is that he doesn't try and do too much. And while I'm sure he's a nice guy and a tireless worker, it doesn't make sense to give him minutes on a team that has not one, but two high-caliber Big Ten centers.

Ditto for Sterling Carter. He was a decent outside shooter at low-major Seattle University, but he's 11-of-42 on 3's this season, and he really doesn't do much else but shoot those while he's on the floor. A three-point specialist that can't hit 3's probably shouldn't be earning meaningful minutes on a team with other options. I could go on-Raphael Davis is an aggressive player who likes to take the ball to the rack. But he's a poor finisher (currently making just 49 percent of his attempts at the rim), and his mediocre free-throw shooting (64 percent) negates much of his ability to get to the line.

But obviously, the biggest problem with the Boilermakers is that A.J. Hammons won't stop turning the ball over on offense, and won't stop fouling people on defense. Frankly, if Hammons didn't do either of those things, he would be the best player in the Big Ten.

The last two categories is the only reason I still think the Boilermakers might have a run left in them. Because it's not just that Hammons only needs to fix those two things-it's that those two things are so incredibly fixable. Hammons might dribble five times a game-there's no reason why he should average five turnovers per 40 minutes. Similarly, there's no reason why Hammons should get into foul trouble every game when he's able to block nearly 20 percent of the other team's two-point attempts. Maybe dial it down to 15 and stay in the game?

OK, I've hit my limit on Purdue. There's only so much one can analyze about this team before frustration sets in. I feel for you, Boiler fans.

Michigan blew a big lead against top-ranked Arizona before crumbling down the stretch.  After shutting down the paint for much of the game, Arizona just overpowered Michigan on the interior. The biggest issue was that the Wolverines just couldn't secure rebounds on defense, as the Wildcats recovered 48 percent of their misses. John Beilein's team got away with it in the first half, as Arizona did not take advantage with a lot of second-chance points, but UM's luck ran out in the second half. This is normally a strong suit for Michigan, and Arizona is a fantastic offensive rebounding team, so I don't have any qualms with seeing this performance as a one-off.

This is not a bad loss by any means, but it was a great opportunity for Michigan to pick up a big win. Additionally, with four losses already, the Wolverines cannot afford a fifth, and they still have to play Stanford next weekend.

Penn State finally played in front of a sold-out crowd, but that was largely because it moved back into its old gym, which only holds about 6,000 fans. Those fans, however, were treated to an epic collapse. The Nittany Lions had absolute control over this game, holding onto an 18-point lead with just six-and-a-half minutes remaining in regulation. Princeton then went on a 24-6 run to end the second half and send the game to overtime, where the Tigers quickly took control of the game. Still Tim Frazier had a shot to tie the game, but he missed the layup attempt.

On Saturday, it was apparent that D.J. Newbill and Tim Frazier carried entirely too much of the offense. While each player scored 24 points, they also combined for 13 turnovers. That's going to happen when the defense can focus in on just a couple of players. The result was an uncharacteristically turnover-prone Nittany Lion team, which had 20 turnovers compared to 10 for Princeton. Even in an overtime game that went a total of 82 possessions, handing your opponent 10 free attempts to score is a significant disadvantage.

Rounding out the Big Ten's ugly weekend was Illinois, which fell to a tough Oregon team in Portland. Once again, the Big Ten team blew the lead, as Illinois had a 9-point lead in the second half. The Illini lost this game on defense, allowing Oregon to make 68 percent of its 2-point shots. Some of that was luck-the Ducks made two-thirds of their two-point jumper attempts-but a lot of that was allowing nearly half of Oregon's shots to come at the rim. Illinois statistically has a solid interior defense, but it's worth noting that the team has had a soft non-conference schedule to this point. John Groce's squad will get another interior challenge when it faces Missouri next week, as the Tigers have the 10th-best two-point percentage in the country.

It's another quiet finals week for the Big Ten ahead of the last non-conference tune-ups this weekend. As this past weekend's results show, there's still quite a few teams with plenty to prove.