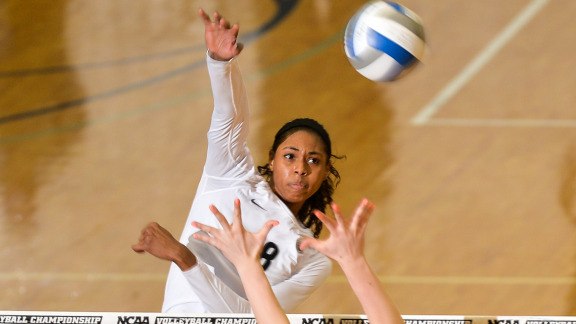 Penn State and Wisconsin advanced to the the NCAA national semifinals Saturday night. The Nittany Lions defeated Stanford, 3-2, to extend their winning streak to 23 straight matches, while the Badgers topped Big Ten rival Purdue, 3-1, to earn their first Final Four berth since 2000. Nebraska fell to Texas, 3-0, in the other Big Ten match.

PENN STATE 3, STANFORD 2 | RECAP
Seniors Ariel Scott and Deja McClendon propelled the No. 2 Penn State women's volleyball team (32-2) to thrilling 3-2 (22-25, 25-22, 28-26, 18-25, 15-11) victory against Stanford (27-6) in the final match of the Lexington Regional. With the win, the Nittany Lions extend their winning streak to 23 consecutive matches. Penn State is the first of four teams to punch a ticket to the NCAA National Semifinals and will now travel to Seattle, Wash. to take on the winner of the Washington-USC match Thursday, Dec. 19. The matchup will broadcast live on ESPN2.

WISCONSIN 3, PURDUE 1 | RECAP
The Wisconsin volleyball team is making history. For the first time since 2000 and the second time in program history, the 12th-seeded Badgers advance to the NCAA Final Four with a 3-1 victory over Purdue in the regional final Saturday night. Wisconsin grabbed a 25-22, 23-25, 25-18, 25-21 decision at the State Farm Center to improve to 27-9 on the season. Wisconsin will face No. 1 Texas at 7:30 p.m. ET Thursday at the KeyArena in Seattle.

TEXAS 3, NEBRASKA 0 | RECAP
Top-ranked Texas proved worthy of its No. 1 seed on Saturday, as the Longhorns continued defense of their 2012 national title with a 3-0 sweep of No. 8 Nebraska in the NCAA Lincoln Regional final in front of 8,343 fans at the Bob Devaney Sports Center.