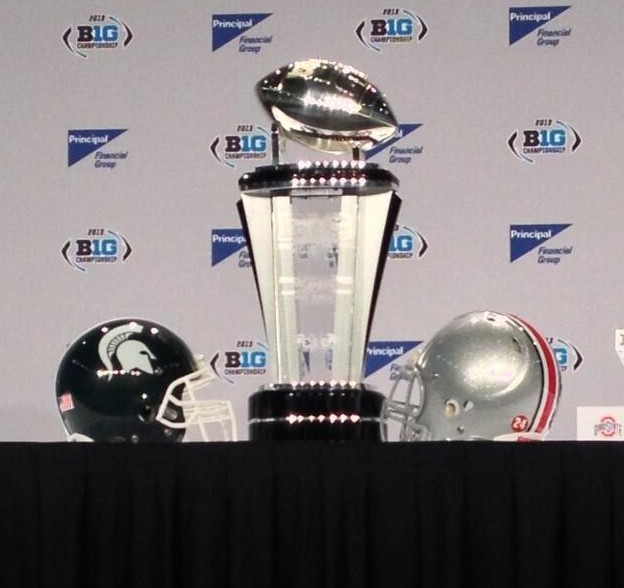 Why not? Each is among the best in the nation in their respective field. And whoever wins that battle will go a long way toward winning the Big Ten championship game on Saturday night at Lucas Oil Stadium.

Check out some of the numbers:

You see? It?s a classic clash of the irresistible force vs. the immovable object.

One old coaching axiom says ?good defense stops good offense.? We shall see. But this much can?t be denied: Michigan State hasn?t seen an offense like Ohio State?s. And the Buckeyes haven?t seen a defense like the Spartans?.

[MORE: Watch both video press conferences for the head coaches.]

The closest Michigan State has come to facing an attack like Ohio State?s was when it played at Nebraska on Nov. 16, a 41-28 win by MSU. From a scheme standpoint, the Huskers attack is similar to the Buckeyes?. In the game vs. the Spartans, the Huskers ran for 182 yards and had 392 total yards behind a banged up o-line and with a backup quarterback. The personnel for Ohio State is better than Nebraska?s. My point: Michigan State could give up some points and yards to a Buckeye offense that features as dynamic a duo as any right now in the nation in Braxton Miller and Carlos Hyde. So, who does MSU try to stop?

?I think if you can sink enough players down there, you can make a real attempt to stop Carlos and Braxton,? said Urban Meyer. ?But that's where you need to have balance in your offense and throw the ball.?

?In terms of Braxton Miller, I see a magician, a guy with a sixth sense, a guy that can take a bad play and make it a very good play, a guy that can create, a guy that's conceptually ?? you can know what Ohio State is doing, be right on top of it, do what you do to stop it that particular time, but he can create and make it a good play,? said Mark Dantonio.  ?We have to be able to defend the loose plays.  He's been excellent at that.

?Second thing, Carlos Hyde is a bull of a runner. He's not just tough, he's fast. We've got to be able to control him. That's designed runs with him.  Also has the ability to catch the football. Be a great challenge for our defense. We're looking forward to that opportunity and that challenge. That's why we're here at this game. That's why they're here.  They're very, very formidable.?

Meyer has been impressed with the emergence of Hyde in 2013.

?Last year he was a good back,? said Meyer. ?This year he's an exceptional back.

Meyer says Hyde had a handful of carries over 12 yards in 2012. He lost 12 pounds and is in much greater shape now. He's stronger. Credit the strength/conditioning staff. Meyer likes his players lean; and Hyde is lean and mean now. Ditto the linemen, who are down 20, 25, 30 pounds.

?You can see he's much more explosive when he hits the second level,? said Meyer. ?He's a much different player than he was a year ago.?

Miller also has continued to develop.

?Braxton was recruited, came to Ohio State,? said Meyer. ?Right before he got here, there were a bunch of things that occurred and he became a starting quarterback as a true freshman. Never truly learned how to properly prepare for a game.  Certainly not last year.

?His sophomore year, Big Ten Player of the Year. Never prepared the way we'd like a quarterback to prepare. His last month and a half, both him and Kenny (Guiton), Tom Herman has done an excellent job with that. I mean, he is preparing like a big?time quarterback should. So I think it's all about his preparation.?

Michigan State and its killer defense also will be prepped for OSU. And Meyer has an idea of what he?s up against.

?We faced some incredible defensive teams over the years,? said Meyer. ?This is one or two or three that I have ever coached against.  I'm trying to think off the top of my head. There's some great defenses in the SEC, so… ?

Michigan State has had some good defenses in recent seasons under coordinator Pat Narduzzi. This may be his best. The Spartans have allowed more than 17 points just twice all season (Indiana and Nebraska 28) and have yielded only 55 points total in the second half of games this season (5.0 ppg).

?Our defensive football team is motivated,? said Dantonio. ?We want to play against the best. We want to prove that we are the best. I think we're prepared.?

We soon will find out.