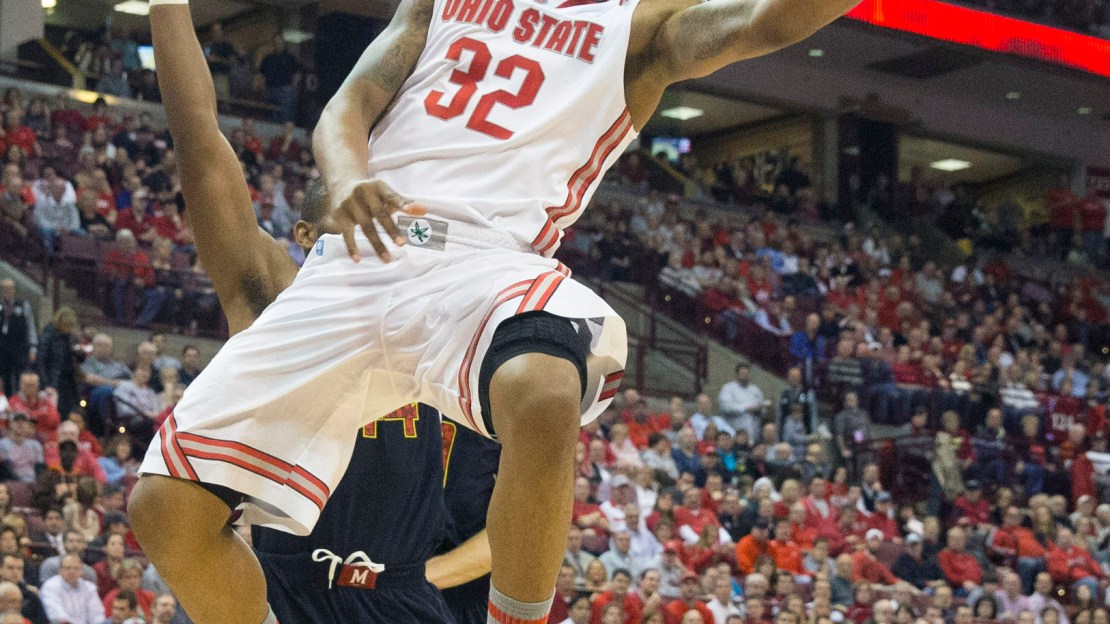 The Big Ten went 4-2 in the second night of the Big Ten/ACC Challenge, which led to a 6-6 tie between the two power conferences. No. 1-ranked Michigan State fell to North Carolina, 79-65, while Ohio State, Wisconsin, Purdue and Nebraska all had impressive victories Wednesday night.

(AP) LaQuinton Ross scored 17 of his 20 points in the first half, hitting his first four 3-pointers, to lead No. 5 Ohio State to an early lead and a 76-60 victory over Maryland on Wednesday night in the ACC/Big Ten Challenge. Sam Thompson added 14 points, including four rim-rattling dunks, and Lenzelle Smith Jr. had 12. Aaron Craft created havoc on defense and chipped in with 10 points as the Buckeyes (7-0) controlled the game at both ends.

VIDEO: It was the Sam Thompson Show in tonight's @OhioStateHoops' win over Maryland. WATCH all the top plays – http://t.co/zPk6ou5PfI

(AP) Josh Gasser scored 11 points and No. 8 Wisconsin won a defensive struggle against Virginia 48-38 Wednesday night in the ACC/Big Ten Challenge, giving coach Bo Ryan his 300th victory with the Badgers. The Badgers (9-0) extended their best start since 1993-94 by limiting Virginia to 23 percent shooting (11 for 47), including a stretch of nearly 22 minutes spanning halftime in which the Cavaliers managed just three field goals. The Badgers won going away despite shooting only 29 percent (15 for 52).

(AP) T.J. Warren scored 22 points to help North Carolina State beat Northwestern 69-48 on Wednesday night in the Big Ten/ACC Challenge. Ralston Turner added 13 points for the Wolfpack (5-2), who led nearly all night and by as many as 23 points after halftime. N.C. State shot 46 percent to win its third straight overall, while the win against Northwestern (4-5) stopped a five-game losing streak in the annual interconference matchup.

(AP) J.P. Tokoto had 12 points and a career-high 10 rebounds to help North Carolina beat No. 1 Michigan State 79-65 Wednesday night, giving the Tar Heels another impressive victory in their inconsistent season. The Tar Heels (5-2) have been talented enough to defeat the top-ranked Spartans and then-No. 3 Louisville this season, but they've also lost to Belmont and UAB.

MUST SEE VIDEO: Matt Costello with a slam on one end, and a HUGE block on the other end! #orvillemoment WATCH – http://t.co/4J9s5ZQmxX

(AP) Terone Johnson scored a season high 18 points, Ronnie Johnson added 15 and Kendall Stephens finished with 11 Wednesday night, leading Purdue past Boston College 88-67 in the ACC-Big Ten Challenge. The Boilermakers (7-2) have been one of the Big Ten's most consistent teams in the annual head-to-head matchup between the major conferences and proved it against one of the ACC's more reliable teams.

(AP) Terran Petteway scored all 14 of his points in the second half and Walter Pitchford added 13, and Nebraska posted a grinding 60-49 victory on Wednesday night. The win allowed the Big Ten to forge a 6-6 tie in the 12-game, two-night Big Ten/ACC Challenge. The Big Ten, by virtue of the tie, retains the Commissioner's Cup and is 3-10-2 in the 15 Challenges.