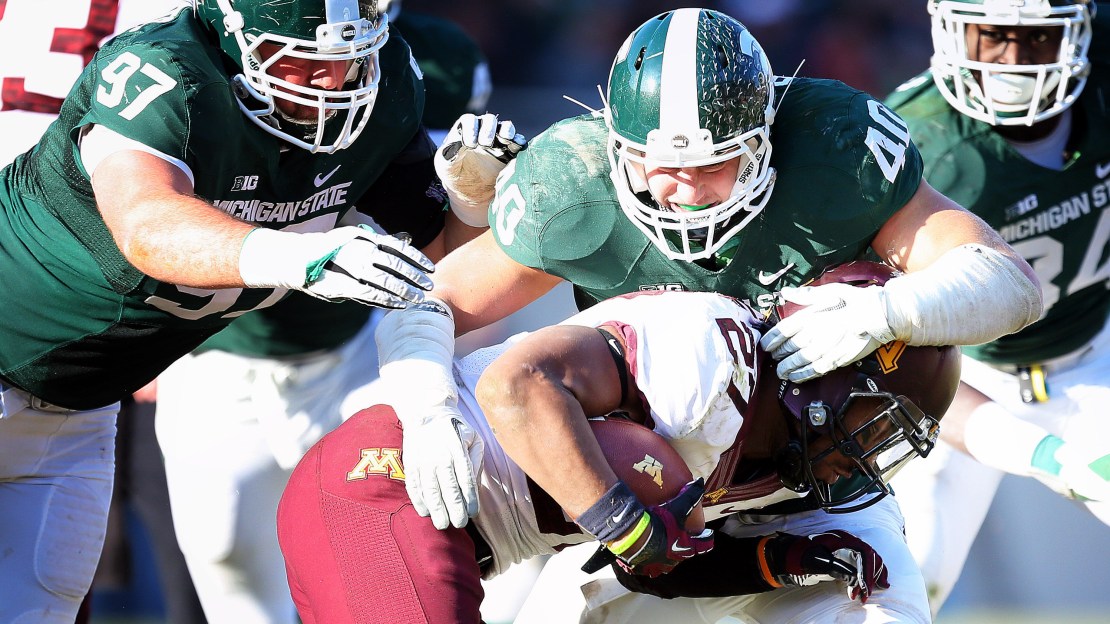 The coaches for Michigan State and Ohio State are furiously game-planning for the Big Ten championship game. I asked several Big Ten coordinators who have prepared for and stared down the Spartans and Buckeyes for their off-the-record views and ideas on how to attack each team. Here?s what they said.

I think MSU needs to get even more boring than they are on offense. They need to line up with as big of personnel as they can and run the football 50 times with Jeremy Langford. Right now, the OSU defense is young and built for speed more so than it is for power. Make Ryan Shazier take on the Iso and Power. Make those guys get off blocks and take on double-teams all day long. Run it, run it, run it, let the clock run and wear ?em out. One of those powers is going to break. The Spartans have to shorten the game, which will keep the ball away from Ohio State's high-powered offense.

What tends to happen, when you think you have a good defense, you call plays a little differently. You can take fewer risks. Everyone in East Lansing knows they have an outstanding defense. Therefore, if you can find a way to score 10, 12, 14 points, you have an excellent chance to win. So now, the quarterback and play-caller are looking to win. You don?t need to score 40 or 50 points. So those players and play-caller are doing a good job of just managing the game, taking what the defense gives and taking advantage of short fields when it?s created by the defense.

On defense, Pat Narduzzi likes to take a lot of chances. He has a lot of sophisticated zone and man blitzes. It will be interesting to see if he?s willing to take those chances against Braxton Miller. If you take those chances, you tend to leave the middle of the field open. Braxton is going to make some people miss and he?ll take some plays that should be three-yard gains and turn them into 15- or 50-yard gains. Your ability to have people in the middle of the field who can tackle him in open space is very important. MSU is a salty defense up front. That will help.

[ MORE: Read all of our Big Ten title game coverage ]

I think Michigan State will be able to play some man-to-man on the edges on Ohio State. That would allow them to assign eight or nine guys to Hyde or Miller to help contain the run game. It?s a big advantage if you feel good about your corners and are able to do that.

They put their D-backs on islands. I thought their secondary was really good. Play-action and getting some type of double-moves on the safeties is key because they are on an island and have a lot field to cover. Up front, they are going to stack the box.

I don?t care what formation you are in, those Spartans safeties are going to be low. There are eight-10 guys within 10-yards to the ball. The safeties play low and tight to the box. With their corners being in man, you have to stress the flats if you are OSU. It?s extremely hard to run against them. They are well-coached, good with their eyes and are where they?re supposed to be. It?s the toughest defense we have played against the last two years.

You have to be able to use the quarterback in the run game vs. MSU. Miller gives you an extra man in the run game. You have to use his speed to keep them honest, and then hit some play-action passes off of it. That will isolate the safeties and corners and beat them over the top.

Watch special teams. Mark Dantonio always has been a big fake guy. He has fakes galore and he?s not afraid to use them. I think it helped them win the Iowa game. Their punter is good. But guys who are good punters tend to take a little longer to punt. Why? As a punter, you like to see your work, see that ball sky rocket, spiral and turn over. If you have to get a punt off in two seconds or less, it can cramp your style. The punter has to be able to see what is coming from a rush standpoint. They have to be able to see if the rush is coming with their peripheral vision. That can be disruptive to a big-legged punter.